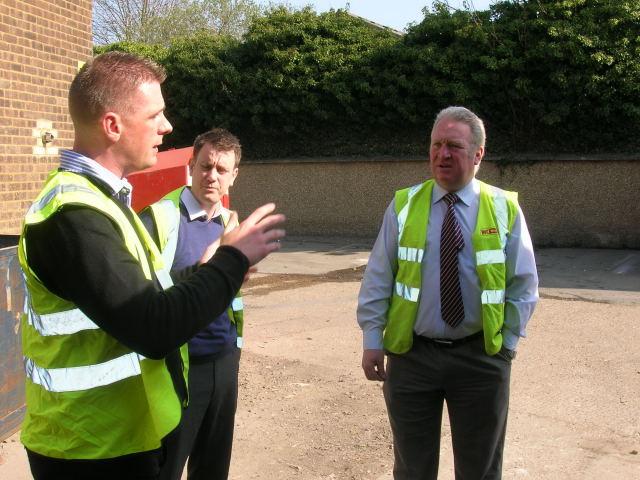 Mike Penning, the Member of Parliament for Hemel Hempstead and the Parliamentary Under-Secretary of State for Transport, has paid a visit the specialist collections, clearance and recycling company, Waste King. While there, he found out about Waste King’s many environmentally-friendly waste and recycling initiatives and congratulated the company and its staff on their award-winning environmentally friendly policies and business strategy.Among these is a recycling point for clothes and shoes, which has proved so popular that it’s been filled – and emptied – over 50 times in the last year. This has helped to raise funds for Waste King’s chosen charities of the British Heart Foundation (BHF) and the Salvation Army.Waste King has also installed a ‘bank’ for unwanted used books, DVDs and so on. The proceeds from this recycling activity have also gone to the BHF.During his conducted tour of Waste King’s premises, on the Frogmore Industrial Estate near Two Waters, Hemel Hempstead, Mr Penning commented: “It’s great to see Waste King playing its part to protect the environment for future generations, make our local economy more environmentally sustainable and improve the quality of life and well-being. “I’ve been impressed by the commitment and dedication of the staff – led by the company’s directors, Glenn Currie and Andy Cattigan – to do as much as possible to protect and enhance our environment through waste collection and recycling.”Last June, Waste King won a ‘Green Apple Award’ in a national campaign to find Britain’s greenest companies. The company was also awarded the ‘Silver Star’ by the National Recycling Stars Scheme - in recognition of the company’s commitment to increasing the amount of waste the company recycles and to improving the environmental awareness of its staff.Waste King was judged on its recycling achievements according to a range of criteria which are designed to assess not only an organisation’s percentage of waste recycled but also the overall commitment and engagement of its staff in implementing environmental initiatives.Waste King’s managing director, Glenn Currie, commented: “We were delighted to receive recognition for our ‘green’ efforts in these two awards – and to receive further recognition by having a visit from our local MP - but the real benefit for our environment is that Waste King guarantees to recycle at least 85 per cent of all the waste it collects.”He added: “I’m pleased to say that consistently, for the last six months or so, we’ve been able to exceed that figure. As part of our corporate social responsibility (CSR) strategy, we want to promote the benefits of recycling not just in environmental terms – helpful though that is – but also in terms of directly benefiting people, through the work of our chosen charities.”Waste King’s recycling and waste collection services include house, garden and garage clearance, wait and load services, waste electrical and electronic equipment (WEEE) collections and site waste management plans (SWMP). The company also offers confidential document destruction.EndAbout Mike Penning MPMike Penning is the Member of Parliament for the Hemel Hempstead constituency. He was first elected in May 2005. After the May 2010 election he was appointed as Parliamentary Under-Secretary of State for Transport. He has previously served on the Health Select Committee and as executive member of the Conservative 1922 Committee. He was a Shadow Minister for Health from 2007 to 2010. Mike was born in North London in 1957 and educated in Essex at Appleton and King Edmund Comprehensive Schools. He is married to Angela and has two daughters Adele and Abby. Mike joined the Army as a boy soldier and served with the Grenadier Guards in Northern Ireland, Kenya and Germany. He also undertook ceremonial duties in London including Trooping of the Colour. On leaving the Army, Mike served as a full time fireman in Essex for many years before going into the family business and later, after several career changes, into political journalism. Mike has many interests outside of politics. Along with being a dedicated family man, he is passionate about sport, especially Rugby Union and Football.About the Green Apple AwardsThe Green Apple Awards began in 1994 and have become established as the country’s major recognition for environmental endeavour among companies, councils, communities and countries. The awards are organised by The Green Organisation, an independent, non-political, non-activist, non-profit environment group dedicated to recognising and promoting environmental best practice.Judges for the Green Apple Awards are drawn from the Environment Agency, the Chartered Institute of Environmental Health, the Chartered Institution for Wastes Management, BRE and other independent bodies.About Waste King LtdA specialist collections, clearance and recycling company, Waste King serves the domestic and commercial markets. It focuses not only on providing a friendly, efficient, cost-effective service but also one which is environmentally friendly. In particular, Waste King’s uniformed, Environment Agency-licensed staff take time to ensure that the maximum amount of waste can be recycled and that all the waste it collects is disposed of in an environmentally friendly way.Waste King was formed, in 2007, by Glenn Currie and Andy Cattigan, who had experience in sales and IT respectively and were keen to ‘do something to help the environment’.Waste King Ltd Unit 13, Frogmore Industrial Estate, Hemel Hempstead, HP3 9RW Tel: 0800 234 3657/ 01442 216784; Web: http://www.wasteking.co.uk Contact: Glenn Currie, 0800 234 3657 / 07761 577001; glenn.currie@wasteking.co.uk PR contact: Bob Little, Bob Little Press & PR, 01727 860405; bob.little@boblittlepr.com