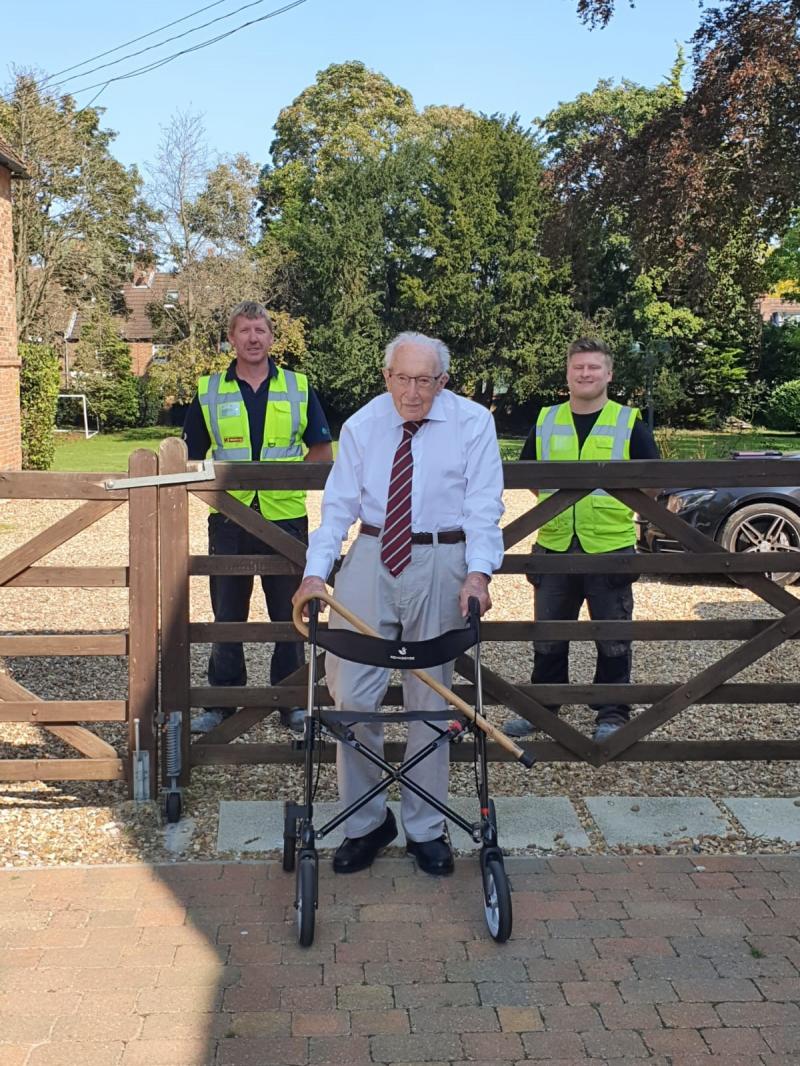 Captain Tom Moore, at his home, with Waste King’s Man and Van team.

Asked by the BBC to collect some unwanted items from the Bedfordshire home of Captain Sir Tom Moore, Waste King, the environmentally friendly waste collection and recycling services specialist, were delighted to help.The BBC had been doing some filming at Captain Tom’s home in Marston Moretaine and, originally, asked Waste King to supply a four-yard skip to take the resulting waste. However, when the BBC learned about Waste King’s ‘Man and Van’ service, they decided that this would be the most cost-effective way to dispose of the waste – and it would guarantee that a higher proportion of the waste was recycled more easily.Andy Cattigan, Waste King’s Operations Director, said, “Compared with the cost of the skip, the Man and Van service turned out to be 34 per cent cheaper - and the Waste King team completed all the loading. Waste King’s Man and Van service is highly cost-efficient and is particularly suitable for household items.”Glenn Currie, Waste King’s Managing Director, commented, “Our team was delighted to meet Captain Tom and he was happy to personally thank the team for their service.“It’s not every day that you meet a chart-topping centenarian who’s raised more than £32m for the National Health Service,” he added. “Indeed, now that Captain Tom – via the BBC – has become a Waste King customer, we’re all looking forward to being able to get hold of a copy of his autobiography, ‘Tomorrow Will Be A Good Day’, which is scheduled for publication by Penguin Books on 17th September this year.”About Captain Tom Captain Sir Thomas Moore, popularly known as ‘Captain Tom’, is a former British Army officer and centenarian, known for his achievements raising money for charity in the run-up to his 100th birthday during the COVID-19 pandemic. On 6th April 2020, at the age of 99, he began to walk laps of his garden in aid of NHS Charities Together, with the goal of raising £1,000 by his hundredth birthday. In the 24-day course of his fundraising he made many media appearances and attracted over 1.5m individual donations. He featured in a cover version of the song ‘You'll Never Walk Alone’ sung by Michael Ball, with proceeds going to the same charity. The single topped the UK music charts and made him the oldest person to achieve a UK number one. On the morning of his 100th birthday the total raised by his walk passed £30 million and, by the time the campaign closed at the end of that day, had increased to over £32.79m. His birthday was marked in many ways, including flypasts by the Royal Air Force and the British Army. He received over 150,000 cards and was appointed as honorary colonel of the Army Foundation College. On 17th July 2020, he was invested as a Knight Bachelor at Windsor Castle.Unit 25b, Old Airfield Industrial Estate, Cheddington Lane, Long Marston, TRING, HP23 4QR Tel: 01442 216784; Web: http://wastekingrubbishclearance.com/ Press contact: Glenn Currie, Waste King Ltd, 01442 216784 / 07761 577001; gc@wasteking.co.uk PR contact: Bob Little, Bob Little PR, 01727 860405; bob.little@boblittlepr.comAbout Waste King Ltd A specialist collections, clearance and recycling company, Waste King serves the domestic and commercial markets. It focuses not only on providing a friendly, efficient, cost-effective service but also one which is environmentally friendly. Waste King offsets its carbon footprint by using various technologies including GPS tracking systems to minimise the mileage its vehicles travel, which also reduces these vehicles’ fuel usage. Waste King’s uniformed, Environment Agency-licensed staff take time to ensure that the maximum amount of waste can be recycled and that all the waste it collects is disposed of in an environmentally friendly way. Waste King was formed, in 2007, by Glenn Currie and Andy Cattigan, who had experience in sales and IT respectively and were keen to ‘do something to help the environment’.

12-02-2019 | Energy & Environment
Waste King
Third Major Green Apple Environment Award for Waste King
Waste King, the environmentally friendly waste collection and recycling services specialist, was named a winner in this year’s Green Apple Awards, at a ceremony held in the Houses of Parliament, at the Palace of Westminster, in London on 25th November. Rewarding environmental best practice and open to any organisation, community or individual, this year’s Awards were presented – in their 25th anniversary year – by the Green Organisation’s founder, Roger
10-04-2019 | Leisure, Entertainment, Miscel …
Waste King
International professional squash tournament in Tring sponsored by Waste King
Waste King, the environmentally friendly waste collection and recycling services specialist, has become one of the sponsors of the 2019/20 PSA World Tour, the international squash circuit organised by the Professional Squash Association (PSA). This month, the PSA World Tour tournament comes to Tring Squash Club, in Hertfordshire – close to Waste King’s headquarters. The winner of the tournament – which runs from 15th to 19th October and is known as
10-31-2018 | Energy & Environment
Waste King
Waste King Helps Make a Young Boy’s Garden Dreams Come True
Waste collection and recycling services specialist, Waste King, is one of four companies which have collaborated to help Tristan, a five-year old boy in Milton Keynes who has Down’s Syndrome, to play safely in his own garden. In the spring this year, Tristan’s father – Luke Timberlake – entered a ‘Magical Garden Makeover’ competition run by Dobbies Garden Centres and MyBuilder.com, an online marketplace helping homeowners find tradesmen. The competition attracted
09-26-2014 | Energy & Environment
Waste King
Waste King announces headquarters’ move
Waste King - a specialist collections, clearance and recycling company that focuses on providing a service which is highly environmentally friendly – is moving its headquarters from the Frogmore Industrial Estate at Two Waters, Hemel Hempstead, to the Old Ministry Airfield, in Cheddington. Waste King’s Operations Director, Andy Cattigan, explained: “For some time, Waste King has been experiencing a steady and continual increase in its customer base. With this has

04-09-2019 | Media & Telecommunications
Matrix PR
“Captain Tsubasa” Dream Tournament Dubai Qualifier Announced
KLab Inc., a leader in online mobile games, has announced that it will host the Dubai Round of the Captain Tsubasa: Dream Team Dream Championship 2019 at its booth at the Middle East Film & Comic Con (MEFCC) in Dubai in April. KLabGames will join an array of exhibitors from all over the world celebrating anime, comics, and games at MEFCC. The Arabic version of KLab’s live streaming service, KLab Games
08-21-2018 | Leisure, Entertainment, Miscel …
Rich Girl Productions
Dominic Pace Shines As Captain Streeper In Syfy Channel's "Megalodon"
It was August 14th, and the middle of the night in the small town of Bojano (pronounced Boiano), Italy in the region of Molise. Dominic Pace was on vacation to see his family he hadn't seen in 23 years. The son of Joseph Pace, who immigrated to America to find a better life when he was 18, Dominic had been chipping away at a career in acting since he was
07-20-2018 | Business, Economy, Finances, B …
Accord Market
Global Cocktail Market 2018 - Bols, Captain Morgan, kitchn, Siam Winery
Accord Market, recently published a detailed market research study focused on the “Cocktail Market” across the global, regional and country level. The report provides 360° analysis of “Cocktail Market” from view of manufacturers, regions, product types and end industries. The research report analyses and provides the historical data along with current performance of the global PP Pipe industry, and estimates the future trend of Cocktail on the basis of this
07-21-2011 | Tourism, Cars, Traffic
Appletree Asia - Hospitality Division
Cruise Ship Captain Relishes Life in Halong Bay
At the helm of the Emeraude on Ha Long Bay since 2005, Captain Jacques LeFur is one of the most accomplished mariners in the country. With four decades of experience on the water, Capt. LeFur holds numerous international marine certificates, as well as the rank of Master Captain, and has been recognized for his service by naval institutions in both France and Vietnam. Six years after his father, a soldier in
05-27-2011 | Associations & Organizations
Treloar Disabled School and College
Captain Treloar's Launches 'Rickshaw Challenge' Fundraiser for Treloar's Disable …
Treloar’s Disabled School and College hosts a new fundraising event with the ‘Rickshaw Challenge', which takes place on the evening of 22nd September 2011 at Leadenhall Market, London. Captain Treloar’s made his debut appearance in London for the launch of Treloar’s brand new fundraising campaign – the superhero themed ‘Rickshaw Challenge’. Navigating their way along one of three routes through the City, entrants must keep their eyes firmly on the prize;
01-26-2011 | Sports
Sportsworld
Sri Lankan Cricket Captain calls upon Sri Sri
Sri Lankan cricket team captain Kumar Sangakara thanked Sri Sri Ravi Shankar and The Art of Living for helping the Sri Lankan cricket team to come out of trauma after the Lahore attack. Kumar Sangakara called on Sri Sri in Colombo on January 23. Sri Sri was on a three-visit to Sri Lanka, from January 21-23. In 2009, immediately after the Lahore attack , the team had undergone breathing sessions and
Comments about openPR
OpenPR ist the nicest and most clearly laid out PR platform I have seen to this day. The press releases are displayed very nicely and clearly and without any unnecessary frills. The updates are fast and the finished release looks appealing and is clearly legible. Even with 16 years of experience one discovers new things from time to time. Congratulations!
Gabriele Ketterl, Director Marketing & PR, Menads