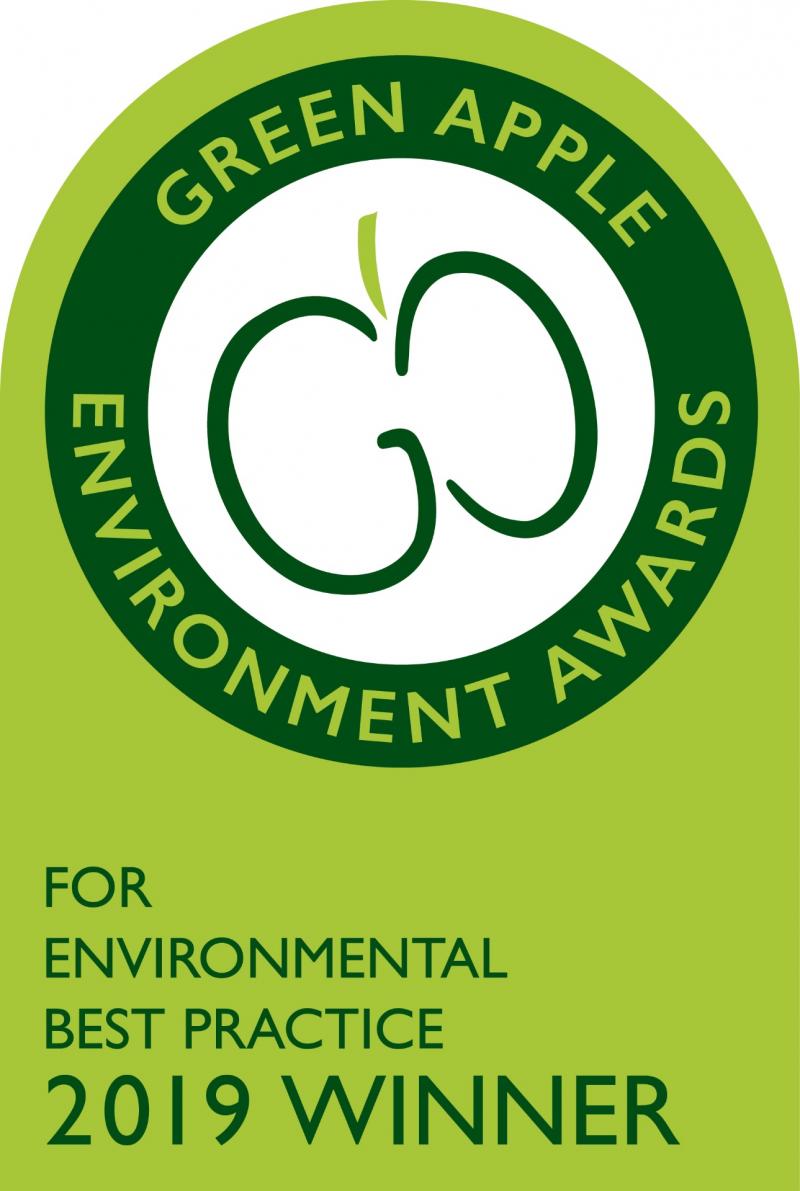 Waste King, the environmentally friendly waste collection and recycling services specialist, was named a winner in this year’s Green Apple Awards, at a ceremony held in the Houses of Parliament, at the Palace of Westminster, in London on 25th November. Rewarding environmental best practice and open to any organisation, community or individual, this year’s Awards were presented – in their 25th anniversary year – by the Green Organisation’s founder, Roger Wolens.Winning its award in the ‘Service Industries – Waste Management’ category, Waste King now has three Green Apple Awards. The company’s previous awards came in 2012 and 2015.Waste King won the Green Apple Award this year for its ‘Waste Pod’ two-man team rubbish clearance service. Used particularly in schools and care homes, waste pods operate in the same way as skips but they are more environmentally friendly and cost-effective.Glenn Currie, Waste King’s Managing Director, commented, “Since we began installing them in 2011, we’ve made some 114,000 waste pod collections, cleared some 160,000 tonnes of waste – and recycled some 98% of this figure.“Waste pods can accommodate all types of waste – including hazardous waste,” he added. “They can be installed anywhere on-site free of charge, they take up only one car parking space – and they’re less of an eyesore than a skip.”Andy Cattigan, Waste King’s Operations Director, said, “From the customer’s point of view, a waste pod is more cost-effective than a skip because we only charge for the waste we remove, rather than charging a set price for a skip-load of waste.“In addition, we’ve found that waste pods reduce our company’s carbon footprint because we’re not sending a skip lorry to the site. Moreover, our insured and licensed two-man waste pod team separate the waste in the pod - which increases the recycling rate for the waste.” Waste King further offsets its carbon footprint by using various technologies including GPS tracking systems to minimise the mileage its vehicles travel, which also reduces these vehicles’ fuel usage.“At present, as far as we know, we’re the only waste company in the UK to operate a waste pod system,” said Glenn Currie. “Waste pods offer an environmentally-friendly alternative to a skip, look better than a skip, are lockable, provide a ‘one-stop-shop’ for most types of waste and can save money for our customers.”The waste pod project has also led Waste King to identify key areas where it can re-use almost all the items collected. They can be re-used on the company’s eBay shop or donated to charities, such as the British Heart Foundation or Age UK. Items that are re-used include fridges, sofas and electrical items. Clothes are recycled through the Salvation Army. About the Green Apple Awards The Green Apple Awards are run by The Green Organisation, an independent, non-political, non-profit environment group dedicated to recognising, rewarding and promoting environmental best practice around the world. Established in 1994 to recognise, reward and promote environmental best practice around the world, the Green Apple Awards scheme was one of the first to be accredited by the RSA as an official feeder scheme into the European Business Awards.Waste King Ltd Unit 25b, Old Airfield Industrial Estate, Cheddington Lane, Long Marston, TRING, HP23 4QR, UK Tel: +44 (0)1442 216784; Web: http://wastekingrubbishclearance.com/ Contact: Glenn Currie, +44 (0)7761 577001; gc@wasteking.co.uk Bob Little, Bob Little PR, +44 (0)1727 860405; bob.little@boblittlepr.comAbout Waste King Ltd A specialist collections, clearance and recycling company, Waste King serves the domestic and commercial markets. It focuses not only on providing a friendly, efficient, cost-effective service but also one which is environmentally friendly. In particular, Waste King’s uniformed, Environment Agency-licensed staff take time to ensure that the maximum amount of waste can be recycled and that all the waste it collects is disposed of in an environmentally friendly way. Waste King was formed, in 2007, by Glenn Currie and Andy Cattigan, who had experience in sales and IT respectively and were keen to ‘do something to help the environment’.

09-16-2020 | Energy & Environment
Waste King
Captain Tom Moore becomes a Waste King customer
Asked by the BBC to collect some unwanted items from the Bedfordshire home of Captain Sir Tom Moore, Waste King, the environmentally friendly waste collection and recycling services specialist, were delighted to help. The BBC had been doing some filming at Captain Tom’s home in Marston Moretaine and, originally, asked Waste King to supply a four-yard skip to take the resulting waste. However, when the BBC learned about Waste King’s ‘Man
10-04-2019 | Leisure, Entertainment, Miscel …
Waste King
International professional squash tournament in Tring sponsored by Waste King
Waste King, the environmentally friendly waste collection and recycling services specialist, has become one of the sponsors of the 2019/20 PSA World Tour, the international squash circuit organised by the Professional Squash Association (PSA). This month, the PSA World Tour tournament comes to Tring Squash Club, in Hertfordshire – close to Waste King’s headquarters. The winner of the tournament – which runs from 15th to 19th October and is known as
10-31-2018 | Energy & Environment
Waste King
Waste King Helps Make a Young Boy’s Garden Dreams Come True
Waste collection and recycling services specialist, Waste King, is one of four companies which have collaborated to help Tristan, a five-year old boy in Milton Keynes who has Down’s Syndrome, to play safely in his own garden. In the spring this year, Tristan’s father – Luke Timberlake – entered a ‘Magical Garden Makeover’ competition run by Dobbies Garden Centres and MyBuilder.com, an online marketplace helping homeowners find tradesmen. The competition attracted
09-26-2014 | Energy & Environment
Waste King
Waste King announces headquarters’ move
Waste King - a specialist collections, clearance and recycling company that focuses on providing a service which is highly environmentally friendly – is moving its headquarters from the Frogmore Industrial Estate at Two Waters, Hemel Hempstead, to the Old Ministry Airfield, in Cheddington. Waste King’s Operations Director, Andy Cattigan, explained: “For some time, Waste King has been experiencing a steady and continual increase in its customer base. With this has

11-19-2018 | Business, Economy, Finances, B …
Bizerba (UK) Ltd
COMPANY GAINS GREEN GLORY
BIZERBA UK have won the BRONZE Environment Award in the national campaign to find the greenest individuals, companies, councils and communities. They competed against more than 800 other nominations in the Green Apple Awards for Environmental Best Practice with their project, ENERGY EFFICIENT CUTTING. They were presented with their trophy and certificate at a glittering presentation ceremony hosted by Liz Kendall MP at the Houses of Parliament on November 12th, 2018. As
09-24-2018 | Business, Economy, Finances, B …
GREEN BEAUTY FARMS
GREEN BEAUTY FARMS
Have you ever looked out at the streets and thought you deserve a better place to be? Do you own an SUV and a sedan and still have a landlord? Have ever realized that your surroundings affect your mental state the most. Have you ever even thought that the noise, irritating neighbors and pollution is the actual cause of your anxiety? Are you fed up of spending lots of money
06-08-2018 | Energy & Environment
qyreports
Green energy
Green energy is the electricity derived from smooth assets generating minimum pollution and consists of sun photovoltaic, hydropower, wind electricity, bio-fuels and geothermal. expanded investments in era studies and improvement, supportive regulatory frameworks, extended consciousness and electricity security troubles and environmental concerns amongst others are fueling the boom in call for for clean and inexperienced energy. The report on the Global Smart Cards Automated Fare Collection System Market is a thorough
07-13-2017 | Industry, Real Estate & Constr …
Climaveneta
A green hotel on a green island
Mitsubishi Electric Hydronics & IT Cooling Systems, through its brand Climaveneta, has recently supplied HVAC units to the new luxury hotel now under construction at Benitses Beach in Corfu, also known as the “Green Island” for its thick vegetation. The complex includes a 5-star hotel, 40 bungalows and furnished villas, with a total capacity of 893 beds. It is the first large hotel in Greece, designed to avoid the use
12-12-2014 | Logistics & Transport
German Center for Research and Innovation
Green Logistics
Logistics has become an indispensable component of today’s global economy. On Thursday, December 11, join experts at the German Center for Research and Innovation (GCRI) in New York for a discussion on the future of sustainable logistics. NEW YORK (December 8, 2014) – Global supply chains and distribution networks are a key performance factor for many companies as they attempt to coordinate activities in a way that meets customer requirements at
03-03-2011 | Energy & Environment
GluePlace
100% Green Spray Adhesive
Using current technology both in adhesive compounding and aerosol packaging, Adhesives Solutions, Inc. has developed a true “GREEN” aerosol spray adhesive. The only one of its’ kind on the market today. Introducing V&S 1226 Water Based Foam & Fabric Spray Adhesive, this spray produces bonds with foam tearing strength. It is specially formulated for bonding flexible foams to themselves or other materials such as: wood, metal, paper, fabrics, corrugated, etc.
Comments about openPR
9 o'clock: discuss press release with client, 10 o'clock: submit release to openPR, within the briefest possible time release is published and displayed in a prominent place on openPR.de. I am thrilled!
Zehra Spindler, Calypso Now! - Communication Agency