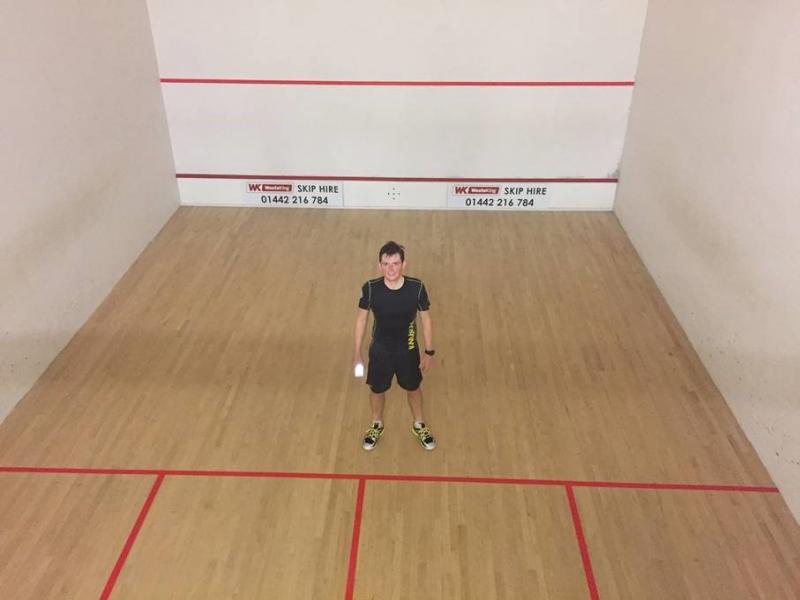 On the court at Tring - displaying Waste King signage - is the Scottish professional, Greg Lobban, the current world number 29.

Waste King, the environmentally friendly waste collection and recycling services specialist, has become one of the sponsors of the 2019/20 PSA World Tour, the international squash circuit organised by the Professional Squash Association (PSA).This month, the PSA World Tour tournament comes to Tring Squash Club, in Hertfordshire – close to Waste King’s headquarters. The winner of the tournament – which runs from 15th to 19th October and is known as the Arnold Homes Tring Open - will receive some £25,000.Last year’s Arnold Homes Tring Open saw an all-Welsh final, with Caerphilly’s Peter Creed losing to the 2018 Commonwealth Games semi-finalist, Joel Makin. While Makin is absent this year, Creed – seeded 6 – is back. The top seed at Tring this year is England’s Daryl Selby. Glenn Currie, Waste King’s Managing Director, commented, “As a keen squash player, I’m excited that some of the world’s best professional players will be returning to Tring as part of the PSA World Tour – and I’m delighted that Waste King can help make that happen.“Much as I’d have liked to have been playing in the tournament, my primary focus for the last 12 years has been helping to provide a friendly, efficient, cost-effective waste collections, clearance and recycling service which is environmentally friendly,” he added. “Unlike the PSA World Tour, Waste King’s activities may not – yet – span the world but we now operate throughout the UK, working with commercial and domestic customers.“So, while some of the world’s elite squash players will be playing hard at the tournament in Tring, Waste King will be working hard to clear waste around the country and make it a more environmentally friendly place.”About PSA World Tour The 2019/20 PSA World Tour is the international squash circuit organised by the Professional Squash Association (PSA) for the 2019/20 squash season. It's the 5th PSA season since the merger of PSA and WSA associations in 2015. The most important tournaments in the series are the Men's and Women's PSA World Championship. The tour also features two circuits of regular events: PSA World Tour, which features the highest prize money and the best fields and PSA Challenger Tour.Waste King Ltd Unit 25b, Old Airfield Industrial Estate, Cheddington Lane, Long Marston, TRING, HP23 4QR Tel: +44 1442 216784; Web: http://wastekingrubbishclearance.com/ Contact: Glenn Currie, Waste King Ltd, +44 1442 216784 / +44 7761 577001; gc@wasteking.co.uk PR contact: Bob Little, Bob Little PR, +44 1727 860405; bob.little@boblittlepr.comAbout Waste King Ltd A specialist collections, clearance and recycling company, Waste King serves the domestic and commercial markets. It focuses not only on providing a friendly, efficient, cost-effective service but also one which is environmentally friendly. In particular, Waste King’s uniformed, Environment Agency-licensed staff take time to ensure that the maximum amount of waste can be recycled and that all the waste it collects is disposed of in an environmentally friendly way. Waste King was formed, in 2007, by Glenn Currie and Andy Cattigan, who had experience in sales and IT respectively and were keen to ‘do something to help the environment’.

09-16-2020 | Energy & Environment
Waste King
Captain Tom Moore becomes a Waste King customer
Asked by the BBC to collect some unwanted items from the Bedfordshire home of Captain Sir Tom Moore, Waste King, the environmentally friendly waste collection and recycling services specialist, were delighted to help. The BBC had been doing some filming at Captain Tom’s home in Marston Moretaine and, originally, asked Waste King to supply a four-yard skip to take the resulting waste. However, when the BBC learned about Waste King’s ‘Man
12-02-2019 | Energy & Environment
Waste King
Third Major Green Apple Environment Award for Waste King
Waste King, the environmentally friendly waste collection and recycling services specialist, was named a winner in this year’s Green Apple Awards, at a ceremony held in the Houses of Parliament, at the Palace of Westminster, in London on 25th November. Rewarding environmental best practice and open to any organisation, community or individual, this year’s Awards were presented – in their 25th anniversary year – by the Green Organisation’s founder, Roger
10-31-2018 | Energy & Environment
Waste King
Waste King Helps Make a Young Boy’s Garden Dreams Come True
Waste collection and recycling services specialist, Waste King, is one of four companies which have collaborated to help Tristan, a five-year old boy in Milton Keynes who has Down’s Syndrome, to play safely in his own garden. In the spring this year, Tristan’s father – Luke Timberlake – entered a ‘Magical Garden Makeover’ competition run by Dobbies Garden Centres and MyBuilder.com, an online marketplace helping homeowners find tradesmen. The competition attracted
09-26-2014 | Energy & Environment
Waste King
Waste King announces headquarters’ move
Waste King - a specialist collections, clearance and recycling company that focuses on providing a service which is highly environmentally friendly – is moving its headquarters from the Frogmore Industrial Estate at Two Waters, Hemel Hempstead, to the Old Ministry Airfield, in Cheddington. Waste King’s Operations Director, Andy Cattigan, explained: “For some time, Waste King has been experiencing a steady and continual increase in its customer base. With this has