LYMEC the programmatic force of ELDR 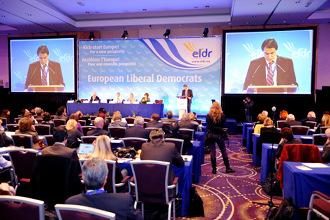 Last weekend, the European Liberal, Democrat and Reform Party (ELDR) assembled in Barcelona to hold its 30th Congress. The European Liberal Youth (LYMEC) attended the Congress with ten delegates as well as having many active LYMEC members in the other party delegations active in Barcelona.Congress reelected Annemie Neyts (OpenVLD) as President of the ELDR Party for her third mandate. David Griffiths (LibDems) has been re-elected as Treasurer for the second time.The Congress also elected 4 Vice Presidents: Markus Löning (FDP), Lousewies Van Der Laan (D66), Marc Guerrero (CDC) and Leoluca Orlando (IdV).LYMEC President Aloys Rigaut commented: “We would like to congratulate very warmly all those elected and wish them every success. With the entry into force of the Lisbon treaty, democratic control and strong European parties are now more needed than ever. The main challenge for the ELDR will be to continue transforming itself from an European umbrella organization into a true political party, directed towards gaining influence on the decision-making in order to implement its policies.”Besides the Bureau elections, it was the programmatic debate that dominated the Congress in Barcelona. LYMEC proved to be a strong force for political debate within ELDR while discussing the theme resolution “Liberal Answers For A New Prosperity”.LYMEC Vice President and delegation leader Alexander Plahr commented: “We managed to improve the theme resolution further, making it an excellent document dealing with liberal economy. We can also be extremely proud that we managed to convince ELDR delegates of LYMEC policies in many other areas: ELDR now officially opposes automatic transfer of SWIFT banking data to the United States of America, is in favour of genetically modified crops and calls for a stronger commitment towards European Citizenship. LYMEC has proved that it is the programmatic force of ELDR. We now look forward to our mother party implementing those policies in their statements and events.”The European Liberal Youth, abbreviated as LYMEC, is a pan-European youth organisation seeking to promote liberal values throughout the EU and particularly through and as the youth organisation of the European Liberal Democrat and Reform Party (ELDR) and its parliamentary group in the European Parliament (ALDE).Involving about 210,000 members from all across Europe, LYMEC is made up Member Organisations (MO) and Individual Membership (IM) and it is active across the European continent. Our central aim is the creation of a liberal and federal Europe.LYMEC Secretariat Rue Montoyer 31/7 B-1000 Brussels Belgium (EU)Tel: +32 2 237 0146 Fax: +32 2 231 1907Email: office@lymec.eu Website: www.lymec.eu

07-07-2011 | Politics, Law & Society
LYMEC - European Liberal Youth
LYMEC: GMO legislation is a black day for the internal market
Yesterday the European Parliament adopted a report which allows to ban or restrict the cultivation of GMOs (Genetically Modified Organisms) individually on Member State level. Reacting to the news, LYMEC President Alexander Plahr commented: "This is a black day for the internal market. In the future the same GMO crops will be allowed in some, but forbidden in other Member States. If any kind of crops has to be forbidden,
11-30-2009 | Politics, Law & Society
LYMEC - European Liberal Youth
SWIFT: Liberals oppose erosion of individual privacy rights
This Monday, the 30th of November, the Council of the European Union is set to decide on the controversial issue of giving the United States of America access to so called SWIFT banking data. This is an issue that has been under preparation for a couple of years and aims at enhancing the odds of tracking down and countering potential terrorists and terrorists acts through the coordination of this data
08-17-2009 | Politics, Law & Society
LYMEC - European Liberal Youth
LYMEC: No sellout of personal bank data
The European Liberal Youth LYMEC strongly criticizes plans to grant US officials access to European bank data. Recently, member states have mandated the Presidency of the Council to negotiate new conditions under which the US will get unlimited access to private banking data. The US wants to have access to a new European database that SWIFT, a huge inter-bank network, is setting up in Switzerland. Currently the US treasury already can
07-21-2009 | Politics, Law & Society
LYMEC - European Liberal Youth
Iceland: In from the cold
On Friday the Republic of Iceland handed in an application to join the European Union to the Swedish EU presidency. Iceland's parliament last week had backed the government's plan to begin talks to join the EU, months after a meltdown of the north Atlantic island's economy amid the global financial crisis. LYMEC President Aloys Rigaut reacted: 'Iceland is one of Europe's oldest democracies and we can thus only welcome its EU
12-30-2008 | Politics, Law & Society
LYMEC - European Liberal Youth
Slovakia to join the Eurozone on January 1st
The European Liberal Youth (LYMEC) welcomes the introduction of the common currency in Slovakia. On January 1st 2009, the country will join the ranks of currently 15 member states that use the Euro. "Start-up packages" containing the EUR equivalent of 500 Sk (16.60 €) are already sold at all post offices and local commercial banks since December 1st. LYMEC President Aloys Rigaut states: "On New Year, five million Slovaks will join
06-05-2008 | Politics, Law & Society
LYMEC - European Liberal Youth
Elections in Macedonia: Democracy at stake
SKOPJE/BRUSSELS. Macedonia\'s Conservative \'\'Coalition for better Macedonia\'\' led by VMRO-DPMNE has won on first early parliamentary elections in the history of Macedonia, held on 1st of June. Last results published by State electoral committee showed that 46,89% of voters supported the \'\'Coalition for better Macedonia\'\'. Both liberal parties, Liberal Democratic Party and Liberal Party, were running on common election list as part of coalition named \'\'Sun - Coalition for Europe\'\',
Comments about openPR
OpenPR ist the nicest and most clearly laid out PR platform I have seen to this day. The press releases are displayed very nicely and clearly and without any unnecessary frills. The updates are fast and the finished release looks appealing and is clearly legible. Even with 16 years of experience one discovers new things from time to time. Congratulations!
Gabriele Ketterl, Director Marketing & PR, Menads