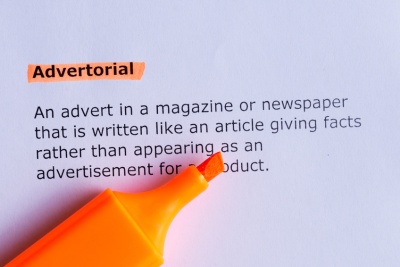 An advertorial is an advert that is written in a particular style and that has a slightly different aim and use than other forms of adverts. This is ‘advert as article’ and it has a lot going for it that any marketer should consider. In this post, we’ll be looking at the role of the advertorial in a bit more detail, as well as how you should write the perfect example!

What is an Advertorial?

While an advertorial can be found in both print media and online, it is perhaps most traditionally associated with print media. Here, the advertorial is often an ad that will appear in magazines that are displayed as full-page adverts.

What’s most important regarding advertorials, is that they are written as though they were articles. Often this will be written like news and in some cases, it can genuinely provide a lot of information.

The name is a portmanteau of these two terms in fact:

Why You Should Use Advertorials

Many people reading this might at first think that this sounds misleading. Perhaps they are concerned that their advertorials will be misleading, in that they will sound like articles when they are really adverts.

This is not the objective of a well-written advertorial however, and in fact it should always be made clear in some form or another that the article is in fact an advert. In print media, there will normally be a little disclaimer at the top, describing the content as an advert.

OpenPr-Tip: However, online you will often find that the definition is less clear cut. You might have seen articles explaining new fitness trends and the only thing giving away that they are not adverts is just how biased the content is!

In fact, you can make the argument that a lot of content marketing blurs the line between an advertorial. Read content on a website like Bulletproof Exec. Here, you will find interesting articles that tell you how to ‘hack’ your body for better sleep, weight loss or similar. However, almost every article will include tips that revolve around companies the product sells. This is part editorial but it is also subtly advertising.

This is not quite what we would consider to be advertorial however, but rather is content marketing.

Advertorials can however still take on a number of different forms.

One of the most common forms of advertorial is the full page advert which is written as an article, as explained. Often this will simply be ‘news’ that covers the release of the new product.

So, for instance, if you were to be selling a new shampoo, then the article might look something like so:

USERS SAY THAT THIS NEW HAIR PRODUCT HAS MADE THEIR HAIR SOFTER THAN EVER!

All of us want the softest and glossiest hair we can find, and all of us have struggled with split ends at some point. According to users though, a new product from [COMPANY] might just have finally solved all those problems.

The product comes from…”

This kind of advert is much more ‘blatantly’ advertorial in that it is more clearly subjective and trying to make a point and make a sale. That is obvious here because the focus of the story is 100% on the product itself.

Still, notice how the advertorial is written in the third person and not written as a release from the company itself. It does not say ‘Our new product’ and it still has some preamble, much like a traditional editorial.

Notice as well that the headline is written in a way that grabs attention and includes social proof.

This is the same strategy we will often see online, and this tends to utilize even more ‘clickbait’ styled headlines. These headlines are purposefully hyperbolic or they leave out key details in order to encourage the reader to read on. They might include elements of faux controversy.

“THIS NEW PILL CLAIMS TO BE ABLE TO GIVE ANYONE A SIX PACK… BUT SHOULD IT BE LEGAL?”

“ONE WEIRD TRICK THAT CAN SHED POUNDS”

But both these kinds of advertorial have, over time, become somewhat outdated. The problem is that these strategies have been over used and they are somewhat transparent even to begin with. Therefore, many users now see through them and they know what to expect.

The result is that content creators and advertisers have had to become a little more creative in their strategies and have tried to make ads that are less obviously ads.

The golden ratio is often said to be 70%-30%. This is to say that the best content should be 30% promotion and 70% interesting and useful content.

If you have ever read a magazine by a company like Wired then you might have encountered something like this. These magazines for instance will often come with inserts that include detailed articles on  subject that is at once interesting and also promotional.

For instance, in Wired there was recently a piece on IBM’s manufacturing process. The article talked about some of the innovative techniques that the company used and had lots of great pictures of the cars being created.

The article is something that could very likely have existed in the magazine anyway. In this case, it just so happened to also be an advert for IBM and of course reading about innovations in manufacturing will only make a car seem more desirable!

This tends to be the better strategy if you have the opportunity to add an ad to a magazine, then this is the best route to go down. Not only does it seem less clearly biased and self-motivated, but it also offers the reader something interesting in return. On top of that, the reader is going to want to read the advert, which is more than can be said for the vast majority of ads we see and treat simply as spam to be gotten rid of!

Looking for Advertorial and Content Marketing Services | https://www.soocel.com/
Content advertising is a showcasing system used to draw in, connect with, and hold a group of people by making and sharing significant articles, recordings, webcasts, and different media. This methodology builds up aptitude, advances brand mindfulness, and keeps your business top of psyche when it's an ideal opportunity to
Turning Point Magazine Publishes Diversity Themed Issue
Turning Point Magazine, the most widely read small business magazine for African Americans in the United States, today released its diversity themed September/October 2005 issue. Led by its special advertorial section, Corporate Champions of Diversity, this issue is primed to be one of the most valuable magazines this year
Used wind turbines marketplace: global wind turbines trading platform for new and used wind turbines
WindTurbines-MarketPlace has recently launched a global wind turbines trading platform, where demand and supply of new and used wind turbines meet online. WindTurbines-MarketPlace aims to improve wind farms' repowering possibilities. While in many parts of the world wind energy is becoming a popular energy source, since recently there was no
National Ad Focuses On New Perspectives In Long-Term Care Planning
The American Association for Long-Term Care Insurance (AALTCI), announced today it will publish in the December issue of Kiplinger’s Personal Finance magazine, its third consumer-focused advertorial section, entitled “Fresh Perspectives on Long-Term Care Planning." “Fresh Perspectives” will focus on practical long-term care planning strategies in the midst of a challenging
LOVEFiLM’S Calver headlines VCT and EIS Investor Forum 2011
Government changes to the Venture Capital Trust and Enterprise Investment Scheme that have enhanced opportunities for private investors will take centre-stage at this year’s VCT and EIS Investor Forum in London later this month. Hundreds of private investors will converge with representatives of the VCT and EIS fund management community on
© 2004 - 2022 openPR. All rights reserved. FAQ | Imprint | Privacy Policy | Terms & Conditions | Cookie Settings