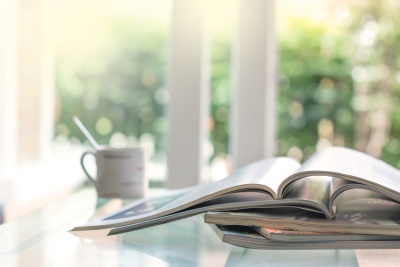 A magazine is a periodical publication that usually incorporates text and images, often in a glossy format, on a particular subject matter. Some examples include trade magazines, celebrity gossip magazines and more. A magazine is a periodical publication that has been around for several hundred years. Magazines have a variety of formats and subject matters, but the most common type of magazine is the glossy format that you would find in your local drugstore. Magazines have images and articles as well as regular features, often using covers with prominent headlines to attract potential buyers.

The first magazine known was launched in the mid-1600s in Germany. Various other countries followed with their own magazines including the Illustrated London News, which began in 1842 and was the first illustrated magazine ever created. Magazines have grown to be a huge percentage of the publications distributed around the world.

There are lots of different types of magazines. One of the most common types of magazines out there is the special interest magazine. These cater to specific hobbies or topics. Sometimes, these are called trade magazines, although that term can also mean a different sort of publication. These types of magazines may be about riding motorcycles, building computers, horseback riding or even something as unexpected as pipe tobacco and pipes.

OpenPr-Tip:There are also a variety of magazines targeted at specific interest groups that have nothing to do with hobbies or trades. For example, there are more than a few celebrity gossip magazines out there. You can see them in the grocery store aisle.

Here are some of the best known magazines in the United States.

There are three types of magazine circulation commonly used today. The first is the pay circulation model which is by far the most common method of monetizing a magazine. People either pay a monthly or yearly subscription to receive the magazine at their home or office, or they must purchase the magazine for the cover price off of the shelves at department stores, newsstands or other retail locations. You have probably seen or even purchased these types of magazines at the grocery store.

There are also a number of free circulation magazines that are out there. Many of these are religious magazines that are paid for by a specific religious organization. Another common type of free magazine is the magazine put out on the sidewalk in free dispensers usually supported by advertising. Finally, there are controlled circulation magazines which only go out to specific people. This is very common in trade publications.

Print magazines are not the only types of magazines out there. There are more and more online magazines being published these days because they do not have the printing and distribution expense of conventional magazines.

Pet Wellness Magazine Market Is Booming Worldwide | Animal Wellness Magazine, Pet Age Magazine, Best Friends Magazine, PetVet Magazine
Global Pet Wellness Magazine Market report provides an in-depth analysis of the key market insights, its future trends, and developments, profiles of leading players, key restraints and drivers, segmentation, and forecasting. The report highlights the market size and CAGR of the important segments, thus providing quick relevant information on the
Pet Wellness Magazine Market is Dazzling Worldwide with Pet Me! Magazine, PetVet Magazine, Boomer Pets Magazine
Latest published market study on Global Pet Wellness Magazine Market provides an overview of the current market dynamics in the Pet Wellness Magazine space, as well as what our survey respondents—all outsourcing decision-makers—predict the market will look like in 2027. The study breaks market by revenue and volume (wherever applicable)
INTRO MAGAZINE NOMINATED FOR BEST MAGAZINE IN OHIO
INTRO MAGAZINE is an official nominee for best magazine at the 2007 Ohio Hip Hop Awards. INTRO is the newest urban entertainment magazine to come out of Ohio. “INTRO is a place where main stream and underground music connect” states CEO Aviana. We introduce you to the newest projects that
Quick Magazine Distribution Is Doable with AnyFlip Online Magazine Software
In this age of digitization, both the publishing and entertainment industries encountered upheavals in the way their marketing and business processes are being done. The means of spreading ideas, news and information are no longer confined in a paper publication. In fact, information dissemination became highly reliant in the use
MemphisRap.com Preparing 'Hip' New Print Magazine Entitled Memphis Rap Magazine
MEMPHISRAP.COM INTRODUCES MEMPHIS RAP MAGAZINE MemphisRap.com, who has served as the authority on hip-hop in Memphis since 2001, has announced its upcoming print publication Memphis Rap Magazine scheduled to release in April 2020. The announcement was made by Memphis Rap’s Co-Founder and Director Hosea ‘M-Town’ Mays, Jr. Memphis Rap Magazine will be
© 2004 - 2022 openPR. All rights reserved. FAQ | Imprint | Privacy Policy | Terms & Conditions | Cookie Settings