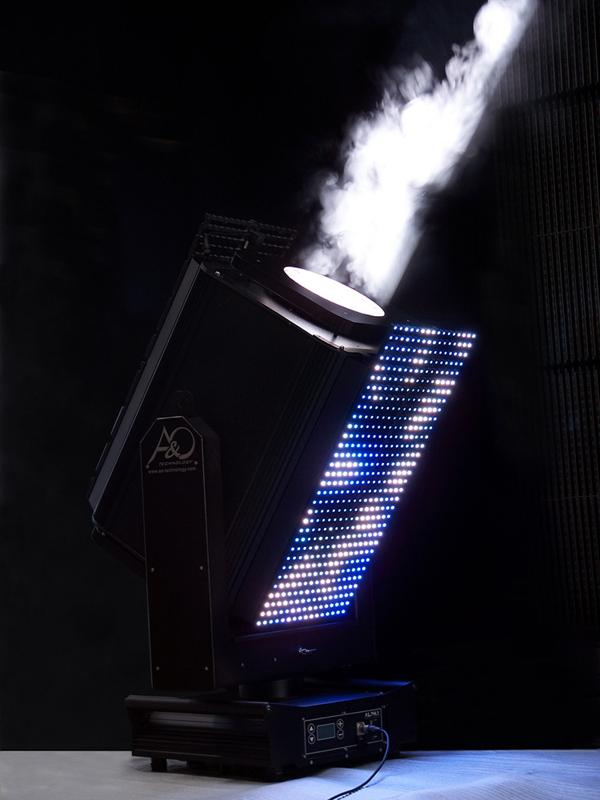 The FALCON® CMY LED-VIDEO is the logical further development of the FALCON® 6000 CMY, the well established 4.000W high-powered xenon searchlight with pan, tilt, CMY, colour changer, scroller for frost effects, dimmer, shutter and zoom. The now novel colour changer “CMY REALCOLOUR”, exclusively developed by alpha one together with ROSCO, is the first device in the world capable of achieving with colour gels the true colour mixing of 1.000 different CMY colours in 10% steps whilst retaining the fundamental colours. The fourth scroller has been equipped with 11 diffusion filters and can be used independently of the mix colours. For the first time, two video-capable LED panels have been successfully united with a searchlight. With this innovation, lighting designers have completely new effect combinations at their disposal. Needless to say alpha one has yet again succeeded in integrating all the driver components into the housing of the device, which is suitable for outdoor use. Only the power supply, DMX and a CAT lead from the video processor are required. What lies behind it? The FALCON® CMY LED-VIDEO is the latest innovation from A&O Technology. As the natural extension of the FALCON® 6000 CMY high-powered searchlight, the hybrid LED/Xenon searchlight is building upon the success of the FALCON® range. With a resolution of 512 pixels at 25mm intervals, over a billion mix colours, and the light output of on average 2.400 nits, the new FALCON® luminaire offers a number of new and highly appealing features. The CMY colour mixing of the FALCON® CMY LED-VIDEO is based on ROSCO SUPERGEL colour filters and eleven diffusion filters. The idea for this innovation came from the criticism that during stage applications the housing of the searchlight, being over a metre high, could partially obstruct sight lines. So A&O, after discussions with internationally renowned lighting designers, set about devising an effects device to which the same criticism would not apply. The result: an ultra-innovative, high-tech product made in Germany. Obviously, before the device was presented for the first time at the Showtech 2009 in Berlin, the requisite protection of utility patents were obtained. The device is specially designed for major events, TV shows and other spectacles indoors or out-of-doors. The FALCON® CMY LED-VIDEO was entirely developed by the German manufacturer alpha one gmbh of Oyten near Bremen and should be available in the autumn of 2009 from A&O Lighting Technology GmbH. A&O Lighting Technology GmbH, which was founded by Marco Niedermeier, has been actively engaged in the hiring and sale of show and architectural lighting equipment since 1995. A&O's diverse inventory includes special LED equipment and several hundred searchlights (high-power xenon floodlights) that can be used for well-known entertainment- and architectural lighting applications. It also has the exclusive worldwide distribution rights to a variety of architectural luminaries and searchlights, such as the FALCON® range from alpha one. A&O Lighting Technology, with headoffice in Germany, is active worldwide with subsidiaries and bureaus in UAE, USA, UK and Asia. For more information, visit: www.ao-technology.com July 2009 / A&O Lighting Technology GmbH Industriestraße 31-33, 28876 Oyten, Germany, Telephone: 0 42 07 / 66 84-0 Internet www.ao-technology.com, Contact: Tanja Niedermeier

12-12-2016 | Tourism, Cars, Traffic
Arts Outdoor Lighting Technology GmbH & Co. KG
Bridges in the light – Dubai Water Canal officially opened
November 2016, Dubai – For the inauguration of the Dubai Water Canal, AO Lighting was commissioned by Scientechnic to bathe two pedestrian bridges in blue, white and golden yellow light for a period of two weeks. After some three years of construction work, Dubai celebrated the official opening of the Dubai Water Canal with an impressive son et lumière. To mark the occasion, AO Lighting was commissioned by Scientechnic L.L.C to
08-08-2014 | Arts & Culture
A&O Lighting Technology GmbH
Mario Barth celebrates another world record – lighting designers Manfred “Ol …
June 2014, Olympic Stadium, Berlin – He did it again. Marion Barth’s fans remained loyal to him and handed him another world record in the Olympic Stadium for his show “It’s all men’s fault,” say women. A&O Technology supplied seventy FALCON searchlights for the event, which was recorded for DVD. Over Whitsun weekend, the comedian Mario Barth attempted a new world record, holding out to his vast legion of fans an
08-08-2014 | Arts & Culture
A&O Lighting Technology GmbH
Wianki 2014 – Lighting designer Pawel Pajak crowns Krakow’s Midsummer’s Ni …
June 2014, Krakow – The twenty-first of June is the longest day of the year and the shortest night; the summer solstice. Every year on the same date many Polish cities hold the Wianki Music Festival – chief among them Krakow. With tons of fireworks, a wide variety of musical offerings and an impressive array of FALCON searchlights, the banks of the Vistula near the Wawel hill this year were
01-24-2014 | Leisure, Entertainment, Miscel …
A&O Lighting Technology GmbH
A&O Creative celebrated the end of the year with three spectacular international …
January 2014, Dubai/Doha – With three spectacular events, A&O Technology in the role of general contractor, along with its in-house creative department under the leadership of the lighting designer Jerry P. Appelt, was able to close out the year 2013 in style and hit the ground running in 2014. At the end of November, the lighting specialist bathed the Burj Khalifa in light to mark the announcement that the city
08-31-2010 | Sports
A&O Lighting Technology GmbH
A&O FALCON®s at the Winter Olympics in Vancouver
Although temperatures were originally around 10° C and everyone was worried about conditions for the Winter Olympics, the weather in the end played along and the Games could begin on schedule. An impressive closing ceremony on the 28th February in the sold-out BC Place Stadium in Vancouver, British Columbia, then marked the end of the 21st Winter Olympics. For this major sporting occasion, A&O Technology USA commissioned by PRG Los
08-31-2010 | Arts & Culture
A&O Lighting Technology GmbH
A&O Middle East supports Maharashtra Day, one of the biggest shows in India 2010
It was fifty years ago on the 1st May 1960 that the state of Maharashtra achieved sovereignty. In the years since, it has established itself as one of the most important states in India. The fiftieth jubilee was marked by an enormous celebration in the state’s capital Mumbai, formerly known as Bombay. Maharashtra Day, or Kaamgaar Din, is regarded as a red letter day in the Indian calendar. Done Events of
Comments about openPR
OpenPR ist the nicest and most clearly laid out PR platform I have seen to this day. The press releases are displayed very nicely and clearly and without any unnecessary frills. The updates are fast and the finished release looks appealing and is clearly legible. Even with 16 years of experience one discovers new things from time to time. Congratulations!
Gabriele Ketterl, Director Marketing & PR, Menads