A&O FALCON®s at the Winter Olympics in Vancouver 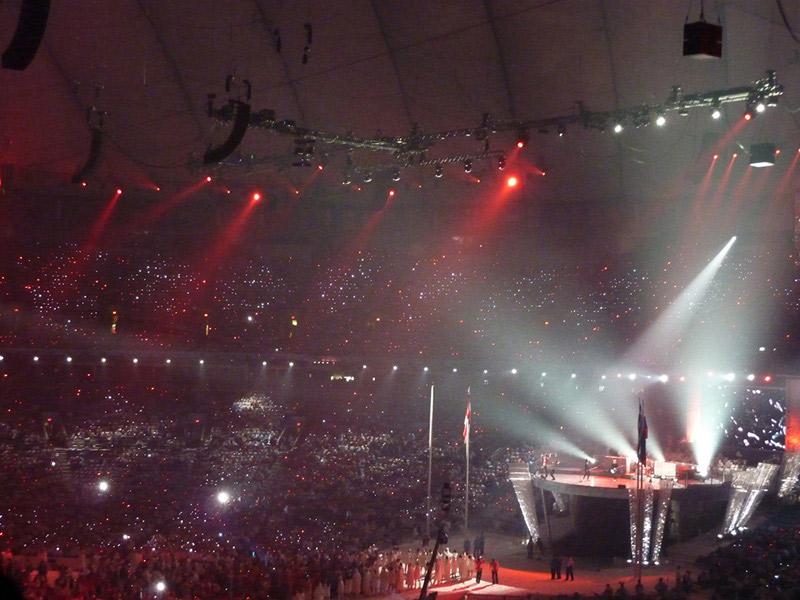 Although temperatures were originally around 10° C and everyone was worried about conditions for the Winter Olympics, the weather in the end played along and the Games could begin on schedule. An impressive closing ceremony on the 28th February in the sold-out BC Place Stadium in Vancouver, British Columbia, then marked the end of the 21st Winter Olympics. For this major sporting occasion, A&O Technology USA commissioned by PRG Los Angeles provided in all forty-four FALCON 6000 CMY and four FALCON FLOWER 7000W units. It was the first time such a large number of FALCON xenon searchlights had ever been deployed in Canada.The xenon searchlights, manufactured by alpha one, were used during the opening ceremony, the nightly medal presentation ceremonies and the closing ceremony in Vancouver’s BC Place Stadium. Thirty-six FALCON 6000 CMY units were flown from trussing beneath the stadium roof and four FALCON FLOWER 7000W units used as floor lamps. For each evening’s medal presentation ceremony, the lighting equipment was supplemented by a further eight FALCON 6000 CMY units positioned as additional floor lamps to the side of the stage. The lighting design for the ceremonies was the work of Bob Dickinson of Full Flood. The Winter Olympics were carried by TV stations throughout Canada and all over the world, the coverage including not only the competitions but also the various ceremonies.A&O Lighting Technology GmbH, which was founded by Marco Niedermeier, has been actively engaged in the hiring and sale of show and architectural lighting equipment since 1995. A&O's diverse inventory includes special LED equipment and several hundred searchlights (high-power xenon floodlights) that can be used for well-known entertainment- and architectural lighting applications. It also has the exclusive worldwide distribution rights to a variety of architectural luminaries and searchlights, such as the FALCON® range from alpha one. A&O Lighting Technology, with its head office in Germany, is active worldwide with subsidiaries and offices in UAE, USA and UK. For more information, visit: www.ao-technology.comJuly 2010 / A&O Lighting Technology GmbH, Industriestraße 31-33, 28876 Oyten, Germany, Telephone: 0 42 07 / 66 84-0, Internet www.ao-technology.com, Contact: Tanja Niedermeier

12-14-2018 | Industry, Real Estate & Constr …
Manies Construction
Winter Home Maintenance Guide
Keep your home in tip top shape this winter by performing this list of maintenance tasks to keep your family warm & safe all winter long. If you own a snow blower, be sure to check the manual for any routine pre-season maintenance suggestions. Also, make sure you have easy access to your shovel and have plenty of kitty liter on hand to help prevent slips. (this will not harm
03-30-2016 | Arts & Culture
Jeffrey Breslow Gallery
Magnetism | Meg Frazier + Morgan Winter
Chicago, IL - April 15, 2016, 5p - 8p- Magnetism | Meg Frazier + Morgan Winter. The Jeffrey Breslow Gallery celebrates a unique collaborative exhibition of work by Meg Frazier and Morgan Winter. The show, titled Magnetism, represents the unseen yet tactile energy that exists when two distinct styles approach artistic compositions as one. Meg Frazier, known for her bold brush strokes trickled throughout her abstract style, and Morgan Winter,
03-03-2016 | Fashion, Lifestyle, Trends
G2O Spa + Salon
Winter Rescue
WHAT: While spring is almost in the air, the harsh effects of winter can still be felt on skin and hair. This March, G2O Spa + Salon, Boston’s award-winning day spa and salon on Newbury Street, is reversing the winter woes with complimentary treatments that will rescue hair, skin and nails, and spring everyone’s beauty regime back to life.
11-26-2011 | Fashion, Lifestyle, Trends
Enliten, LLC
Enliten's Winter Release 2011-12
Enliten has announced its annual release and sale for Black Friday. The release has over 20 new additions, including women's apparel for the first time in company history. The new release features a collection of basics with their iconic logo and name on t-shirts, hoodies, and crew neck sweatshirts. To accentuate, the crewneck sweaters have detailed stitching across the lateral body and cross stitching at the neckline. For women, V-necks and
05-13-2011 | Fashion, Lifestyle, Trends
Bastyan Fashions limited
Bastyan Autumn/Winter 2011/12
The latest Autumn/Winter collection from Bastyan is a rich mix of sumptuous colours and tactile textures sitting against silhouettes that evoke a nostalgic almost cinematic feel. Owner and founder Tonia Bastyan designs for the modern woman who wants more than just trend from her wardrobe, she offers her a mix of well cut items which transcend seasons and give a feeling of comfort and quality without compromising on design. The coat collection
01-07-2011 | Sports
Destination Vietnam
Hanoi Winter Golf Promotion
Valid from 1Jan - 28 Feb 2011 Discover Vietnam- The undiscovered Golf Destination Mua Dong – Winter of Hanoi is really something special and admirable Hanoi has 4 different seasons which are very different with the South East Asia countries and it is even much different in winter In winter, you could feel the coldness from the wind blowing from North where Vietnam bordered with China especially on the Golf courses. That is why,
Comments about openPR
OpenPR ist the nicest and most clearly laid out PR platform I have seen to this day. The press releases are displayed very nicely and clearly and without any unnecessary frills. The updates are fast and the finished release looks appealing and is clearly legible. Even with 16 years of experience one discovers new things from time to time. Congratulations!
Gabriele Ketterl, Director Marketing & PR, Menads