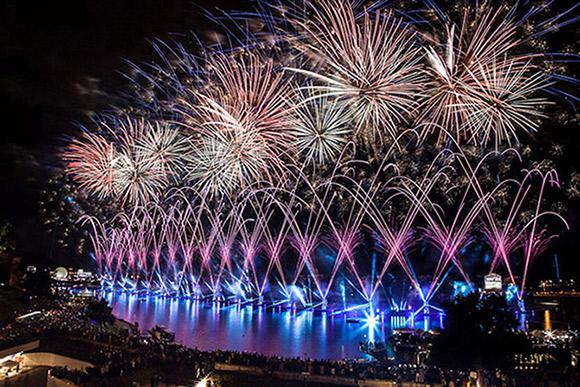 June 2014, Krakow – The twenty-first of June is the longest day of the year and the shortest night; the summer solstice. Every year on the same date many Polish cities hold the Wianki Music Festival – chief among them Krakow. With tons of fireworks, a wide variety of musical offerings and an impressive array of FALCON searchlights, the banks of the Vistula near the Wawel hill this year were bathed in light and sound – a summer spectacle of a particularly spectacular variety!Lighting designer Pawel “Spider” Pajak (Fish Eye) set the powerful coloured beams of FALCON searchlights dancing in the night sky as fireworks detonated all around them in a wide variety of colours and shapes. Krakow was aglow and spectators were enthralled.A&O Technology’s involvement in the event through the client TSE took the form of sixteen FALCON BEAM colour 3000W and thirty of the innovative xenon/LED hybrid FALCON CMY LED VIDEO luminaires supported by trained technicians. One challenge the event posed was the great distance over which the searchlight network extended: the FALCON BEAM colour 3000W searchlights were stationed at 30-metre intervals along the river bank over a length of just under 500 metres. There, too, the batteries of fireworks for the great display were installed. The FALCON CMY LED VIDEO luminaires were used as xenon/LED hybrid searchlights arranged in six groups of five on 1.5-metre platforms. It was their role to provide the crowning moment of the festival with a 15-minute, timecode-controlled show. The searchlights were controlled from the opposite bank of the river via wireless DMX. Two technicians from A&O Technology had been despatched to set up the FALCON searchlights for the big day and establish the network.About A&O Technology For almost twenty years, A&O Technology has been providing regional and international support for even the most demanding projects in the field of architectural or events lighting: from the supply of equipment – whether sale or rental – to the elaboration of creative concepts, to the provision of full-service support in the role of general contractor.The clear division of the company into sales, rental, creative and manufacturing departments guarantees customers communication backed by expertise and efficient solutions at every stage of a project.A large network of tried-and-tested partnerships is available to support your projects.The company’s exclusive distribution portfolio includes the FALCON® range of architectural luminaires and searchlights manufactured by the A&O subsidiary alpha one.A&O Technology has its headquarters in Bremen, Germany, as well as subsidiaries or bureaus in the UAE, USA, Russia and Asia and holds project partnerships worldwide.A&O Lighting Technology GmbH, Arberger Hafendamm 22, 28309 Bremen, Germany, Telephone: +49 (0)421 / 59 66 09-0, Internet www.ao-technology.com, contact: Ljiljana Jurkovic

11-05-2018 | Health & Medicine
Future Market Insights
GCC Medical Gloves Market Size By 2026 | Paul Hartmann AG, Hotpack Packaging Ind …
The GCC medical gloves market is estimated to increase from US$ 99.5 Mn in 2016 to US$ 240.8 Mn by 2026, registering a CAGR of 9.2% over the forecast period 2016–2026, according to a latest report titled “GCC Medical Gloves Market: Industry Analysis & Opportunity Assessment, 2016-2026” published by Future Market Insights. According to Future Market Insights analysts, an increasing awareness regarding hygiene and health and safety is boosting the growth
08-28-2018 | Advertising, Media Consulting, …
Agrimony Market
Agrimony Market Key Players Emorsgate Seeds, Falcon Russia., Healingherbs Ltd.
Agrimony Market Introduction Agrimony is a genus of 12–15 species of perennial herbaceous flowering plants in the family Rosaceae. Commonly it is known to be a domestic medicinal herb, which is native to the temperate regions of the Northern Hemisphere, with one species also in Africa. The agrimony herb has spikes which bear rows of tiny yellow flowers, known as church steeples. The agrimony is also characterized by having fruits that
02-27-2018 | Business, Economy, Finances, B …
business news
Global Turn Coordinators Market 2018 - EGC, FALCON GAUGE, Century Flight
The statistical surveying information incorporated into the Turn Coordinators report is the aftereffect of significant essential and optional research exercises. The report fragments the global Turn Coordinators market based on makers, item compose, applications, and regions. In this report, each fragment is contemplated completely and measurements are introduced in detail. The report offers an exact outline of the global Turn Coordinators advertise covering key factors, for example, drivers and restrictions
11-21-2017 | Industry, Real Estate & Constr …
business news
Global Contact Grills market 2017 - Westahl, Falcon, Dualit, Livart, Zojirushi
Apex Market Reports, recently published a detailed market research study focused on the "Contact Grills Market" across the global, regional and country level. The report provides 360° analysis of "Contact Grills Market" from view of manufacturers, regions, product types and end industries. The research report analyses and provides the historical data along with current performance of the global Contact Grills industry, and estimates the future trend of Contact Grills market
09-14-2017 | Business, Economy, Finances, B …
market research 2017
Contact Grills Market Analysis 2017-2022 Delonghi, Breville, Westahl, Falcon
Global Contact Grills Market by manufacturers, Types, Segment and Region A market study based on the " Contact Grills Market " across the globe, recently added to the repository of Market Research, is titled ‘Global Contact Grills Market 2017’. The research report analyses the historical as well as present performance of the worldwide Contact Grills industry, and makes predictions on the future status of Contact Grills market on the basis of
08-18-2015 | Business, Economy, Finances, B …
A&O Lighting Technology GmbH
FALCON® BEAM 2 – A&O Technology launches new searchlight
In the new FALCON BEAM 2, A&O Technology is bringing a brilliant new searchlight onto the market. With its extended feature set, the FALCON BEAM 2 is now the first choice for demanding illuminations in the fields of entertainment and architectural lighting. Thanks to a new high-precision parabolic reflector with an ultra-reflective coating, the FALCON BEAM 2 guarantees dazzling brightness. The colour changer is based on the tried-and-tested technology
Comments about openPR
OpenPR is clearly structured and remains true to its principle of confining itself to the essential parts. OpenPR has proven to be a very good and reliable partner to our media agency: Within the shortest time the releases are online and go down well with the media representatives. The success of OpenPR is reflected in the steadily increasing number of press releases. It is good that OpenPR exists!
Ursula Koslik, Director Marketing & PR, F+W Hamburg