In 2015, FALCON© searchlights enthuse over 2.6 million at open air events 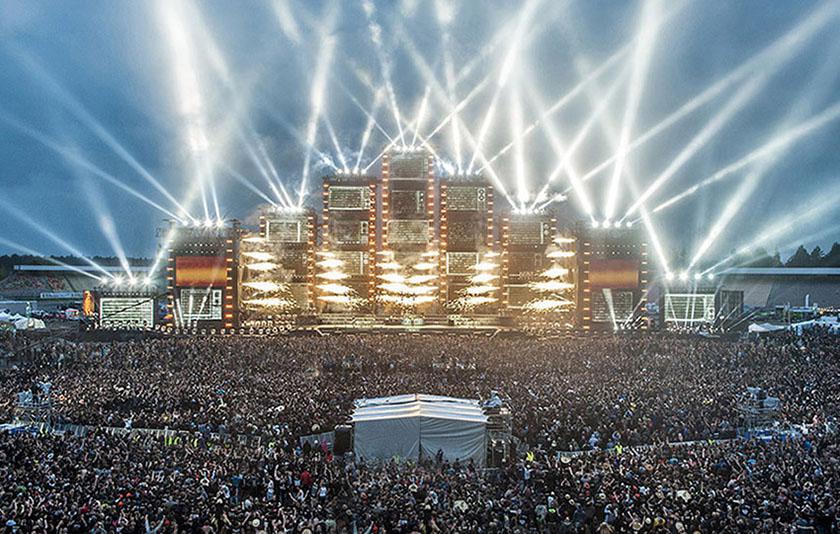 Autumn is coming, and the 2015 season of open air events and festivals in Europe is coming to an end. A&O Technology, manufacturer and distributor of FALCON searchlights, is drawing a highly positive balance for the season. At many of the most important festivals this year, FALCONs were used to make statements in light that were visible for miles around. Despite highly changeable weather – with a July heat wave followed by torrential rain in August and intermittent storms all summer long – the German-made searchlights proved, by their complete indifference to the elements, not only heroic effects engines but also true ‘men of the north’.Spectacular, colour-saturated, dazzlingly bright lighting effects go well with pulsating beats. They make the music visible and transform every open air event into an experience. Such was the case of the World Club Dome in Frankfurt. A&O Creative, under the direction of Manfred “Ollie” Olma, created for Big City Beats a new production for the opening and closing ceremonies in which the world’s biggest club in the Commerzbank Arena was bathed in bright light. This was followed by the popular Hurricane and Southside rock/independent festivals where, for the first time, the client, Benelux GmbH, used FACONs to provide the highlights of the light show. Commissioned by PRG AG, A&O Technology also supplied searchlights for the Wacken Festival and the Böhse Onkelz concert in the Hockenheimring, where the lighting designer, Jerry P. Appelt, worked them into the framework of the gigantic stage to generate impressive special effects. Laser Imagineering, too, integrated the lighting power of FALCONs this year into its production for the Airbeat One Dance Festival. One of the highlights of the summer of 2015 was without doubt the deployment of FALCONs at the Tomorrowland Festival in Belgium at the behest of ID&T, where lighting designer Sander Den Otter used them to impressive effect not only within the unforgettable stage set but also on the festival grounds. Lighting shows at the Ferdinands Feld Festival, the maritime “Sail in Bremerhaven” event, and the annual Water Show at the Autostadt brought the open air and festival season for FALCON searchlights to a triumphant close. Commissioned by Erlebnis Bremerhaven GmbH, A&O Creative produced two lighting shows for the windjammer event: the colour-dynamic illumination “Weserlichter” (Weser Lights) on three successive days in the main port and a second display that was visible every evening in the old harbour. The Autostadt integrated the searchlights into its magnificent, home-grown production “Vive la France!” that kept visitors entertained throughout its four-week run. In all, by the time the season was through, over 2.6 million visitors from all over the world had marvelled at the astonishing brightness of searchlights from A&O Technology. Summing up, one could say that the FALCONs through their versatility and brilliance were able on each occasion to surpass all expectations – regardless of the style of event, the positioning of the devices or the weather conditions. For long-distant effects in particular and to enthuse large crowds, the FALCON proved to be the perfect tool. “We are already looking forward to exciting projects next year,” reveals Adrian Gediga, Senior Manager Sales/Rentals of A&O Technology. “The end of one festival season heralds the start of the next.”About A&O Technology For twenty years, A&O Technology has been providing regional and international support for even the most demanding projects in the field of architectural or events lighting: from the supply of equipment – whether sale or rental – to the elaboration of creative concepts, to the provision of full-service support in the role of general contractor.The clear division of the company into sales, rental, creative and manufacturing departments guarantees customers communication backed by expertise and efficient solutions at every stage of a project.A large network of tried-and-tested partnerships is available to support your projects. The company’s exclusive distribution portfolio includes the FALCON® range of architectural luminaires and searchlights manufactured by the A&O subsidiary alpha one.A&O Technology has its headquarters in Bremen, Germany, as well as subsidiaries or bureaus in the UAE, USA, Russia and Asia and holds project partnerships worldwide. For more information about the company A&O Technology please visit the website www.ao-technology.comA&O Lighting Technology GmbH, Arberger Hafendamm 22, 28309 Bremen, Germany, Telephone: +49 (0)421 / 59 66 09-0, Internet www.ao-technology.com, contact: Ljiljana Jurkovic

You can edit or delete your press release In 2015, FALCON© searchlights enthuse over 2.6 million at open air events here

01-28-2016 | Leisure, Entertainment, Miscel …
A&O Lighting Technology GmbH
A&O Creative broadens the concept of Sail Bremerhaven 2015 with spectacular ligh …
For Sail Bremerhaven 2015, A&O Creative created light shows in the harbour. The lighting, laser and pyro displays enthused the international spectators. Every five years, Bremerhaven is given over to sailors. This year, over 250 ships from 20 nations dropped anchor in the harbour to participate in the Sail Bremerhaven festival, one of the largest gatherings of windjammers and traditional sailing ships in the world. The wide variety of vessels,
01-28-2016 | Leisure, Entertainment, Miscel …
A&O Lighting Technology GmbH
FALCON searchlights conjure magical moments at the Tomorrowland Festival in Belg …
For the first time, FALCON searchlights have been integrated into the imaginative design of the main stage at the Tomorrowland festival. The robust searchlights proved once again that they also make ideal festival luminaires. Their exceptionally far-reaching, colour-drenched lighting effects turned the festival’s main event this year into a truly vibrant spectacle. When colourful internationalism, the beats of electronic music and surreal mysticism come together, the ravers gather at the Tomorrowland
08-18-2015 | Industry, Real Estate & Constr …
A&O Lighting Technology GmbH
A&O Technology adds new brilliance to Dubai’s luxury icon
Burj Al Arab of Jumeirah, the icon of Dubai and one of the most expensive and luxurious hotels in the world, now affords an even more glittering spectacle in the night sky. The exchange and programming of the new high-tech lighting system was performed by local partner A&O Technology. Every evening, the Burj Al Arab offers a colourful light show. The changing hues and brilliant strobe effects enthuse millions of
08-18-2015 | Business, Economy, Finances, B …
A&O Lighting Technology GmbH
FALCON® BEAM 2 – A&O Technology launches new searchlight
In the new FALCON BEAM 2, A&O Technology is bringing a brilliant new searchlight onto the market. With its extended feature set, the FALCON BEAM 2 is now the first choice for demanding illuminations in the fields of entertainment and architectural lighting. Thanks to a new high-precision parabolic reflector with an ultra-reflective coating, the FALCON BEAM 2 guarantees dazzling brightness. The colour changer is based on the tried-and-tested technology

11-05-2018 | Health & Medicine
Future Market Insights
GCC Medical Gloves Market Size By 2026 | Paul Hartmann AG, Hotpack Packaging Ind …
The GCC medical gloves market is estimated to increase from US$ 99.5 Mn in 2016 to US$ 240.8 Mn by 2026, registering a CAGR of 9.2% over the forecast period 2016–2026, according to a latest report titled “GCC Medical Gloves Market: Industry Analysis & Opportunity Assessment, 2016-2026” published by Future Market Insights. According to Future Market Insights analysts, an increasing awareness regarding hygiene and health and safety is boosting the growth
08-28-2018 | Advertising, Media Consulting, …
Agrimony Market
Agrimony Market Key Players Emorsgate Seeds, Falcon Russia., Healingherbs Ltd.
Agrimony Market Introduction Agrimony is a genus of 12–15 species of perennial herbaceous flowering plants in the family Rosaceae. Commonly it is known to be a domestic medicinal herb, which is native to the temperate regions of the Northern Hemisphere, with one species also in Africa. The agrimony herb has spikes which bear rows of tiny yellow flowers, known as church steeples. The agrimony is also characterized by having fruits that
02-27-2018 | Business, Economy, Finances, B …
business news
Global Turn Coordinators Market 2018 - EGC, FALCON GAUGE, Century Flight
The statistical surveying information incorporated into the Turn Coordinators report is the aftereffect of significant essential and optional research exercises. The report fragments the global Turn Coordinators market based on makers, item compose, applications, and regions. In this report, each fragment is contemplated completely and measurements are introduced in detail. The report offers an exact outline of the global Turn Coordinators advertise covering key factors, for example, drivers and restrictions
11-21-2017 | Industry, Real Estate & Constr …
business news
Global Contact Grills market 2017 - Westahl, Falcon, Dualit, Livart, Zojirushi
Apex Market Reports, recently published a detailed market research study focused on the "Contact Grills Market" across the global, regional and country level. The report provides 360° analysis of "Contact Grills Market" from view of manufacturers, regions, product types and end industries. The research report analyses and provides the historical data along with current performance of the global Contact Grills industry, and estimates the future trend of Contact Grills market
09-14-2017 | Business, Economy, Finances, B …
market research 2017
Contact Grills Market Analysis 2017-2022 Delonghi, Breville, Westahl, Falcon
Global Contact Grills Market by manufacturers, Types, Segment and Region A market study based on the " Contact Grills Market " across the globe, recently added to the repository of Market Research, is titled ‘Global Contact Grills Market 2017’. The research report analyses the historical as well as present performance of the worldwide Contact Grills industry, and makes predictions on the future status of Contact Grills market on the basis of
08-18-2015 | Business, Economy, Finances, B …
A&O Lighting Technology GmbH
FALCON® BEAM 2 – A&O Technology launches new searchlight
In the new FALCON BEAM 2, A&O Technology is bringing a brilliant new searchlight onto the market. With its extended feature set, the FALCON BEAM 2 is now the first choice for demanding illuminations in the fields of entertainment and architectural lighting. Thanks to a new high-precision parabolic reflector with an ultra-reflective coating, the FALCON BEAM 2 guarantees dazzling brightness. The colour changer is based on the tried-and-tested technology
Comments about openPR
I can't but agree to the positive statements about your portal: easy to use, clear layout, very good search function, and quick editing!
Jens O'Brien, Borgmeier Media Communication