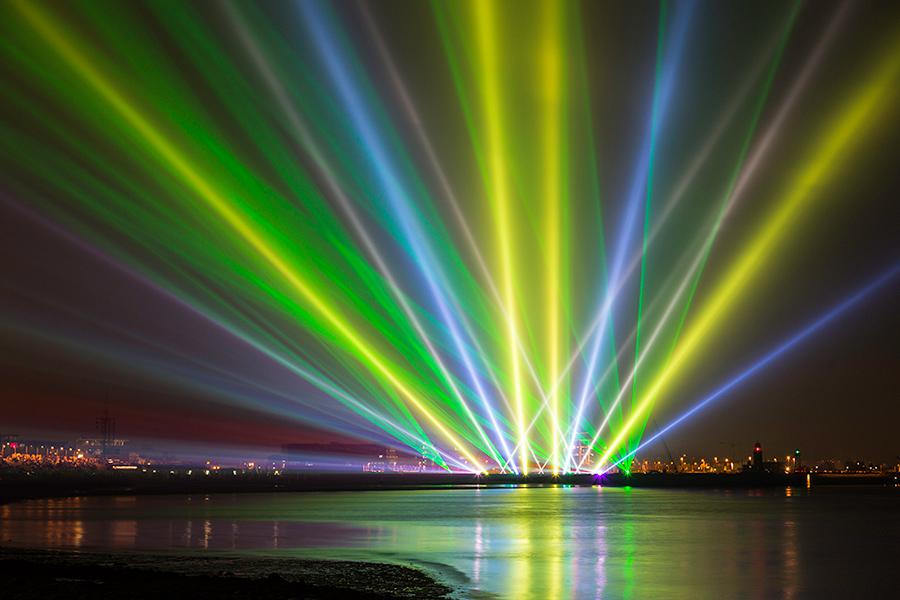 For Sail Bremerhaven 2015, A&O Creative created light shows in the harbour. The lighting, laser and pyro displays enthused the international spectators. Every five years, Bremerhaven is given over to sailors. This year, over 250 ships from 20 nations dropped anchor in the harbour to participate in the Sail Bremerhaven festival, one of the largest gatherings of windjammers and traditional sailing ships in the world. The wide variety of vessels, ranging from schooners to cutters, the flotillas, the open ships, the live bands and the wide variety of culinary delights on offer drew thousands of visitors to the quayside of the coastal town. Commissioned by Erlebnis Bremerhaven GmbH, the creative department of A&O Technology designed, programmed and realized a fourteen-minute, colour-dynamic show entitled ‘Weser Lights’. Over a dozen searchlights were installed at the Weser lido (Weser-Strandbad) for the five-day international windjammer festival. FALCON BEAM 7000W and 3000W searchlights as well as RGB and YAG lasers were among the devices used. A&O Creative together with teams from Comet Feuerwerk and laserfabrik showlaser coordinated the lighting and laser elements with the altitude fireworks. With its musical accompaniment, the light, laser and pyrotechnic show illuminated the coast three evenings in a row. This new attraction proved one of the highlights of this year’s festival.In addition, A&O Creative staged a light show in the old harbour in which FALCON FLOWER 3000W and FALCON CMY LED-VIDEO LED/xenon hybrid searchlights performed each evening their elaborate choreography in the night sky. Their beams reflected in the harbour basin emulated the potpourri of masts that was such a striking feature of the cityscape throughout Sail Bremerhaven. At the end of the festival, the organizers announced that over 1.2 million visitors from all over the world had witnessed this display of the largest and most beautiful sailing ships in the world. Sail Bremerhaven was opened by its patron, German president Joachim Gauck.About A&O Technology For twenty years, A&O Technology has been providing regional and international support for even the most demanding projects in the field of architectural or events lighting: from the supply of equipment – whether sale or rental – to the elaboration of creative concepts, to the provision of full-service support in the role of general contractor.The clear division of the company into sales, rental, creative and manufacturing departments guarantees customers communication backed by expertise and efficient solutions at every stage of a project.A large network of tried-and-tested partnerships is available to support your projects. The company’s exclusive distribution portfolio includes the FALCON® range of architectural luminaires and searchlights manufactured by the A&O subsidiary alpha one.A&O Technology has its headquarters in Bremen, Germany, as well as subsidiaries or bureaus in the UAE, USA, Russia and Asia and holds project partnerships worldwide. For more information about the company A&O Technology please visit the website www.ao-technology.comA&O Lighting Technology GmbH, Arberger Hafendamm 22, 28309 Bremen, Germany, Telephone: +49 (0)421 / 59 66 09-0, Internet www.ao-technology.com, contact: Ljiljana Jurkovic

01-28-2016 | Leisure, Entertainment, Miscel …
A&O Lighting Technology GmbH
In 2015, FALCON© searchlights enthuse over 2.6 million at open air events
Autumn is coming, and the 2015 season of open air events and festivals in Europe is coming to an end. A&O Technology, manufacturer and distributor of FALCON searchlights, is drawing a highly positive balance for the season. At many of the most important festivals this year, FALCONs were used to make statements in light that were visible for miles around. Despite highly changeable weather – with a July heat wave
01-28-2016 | Leisure, Entertainment, Miscel …
A&O Lighting Technology GmbH
FALCON searchlights conjure magical moments at the Tomorrowland Festival in Belg …
For the first time, FALCON searchlights have been integrated into the imaginative design of the main stage at the Tomorrowland festival. The robust searchlights proved once again that they also make ideal festival luminaires. Their exceptionally far-reaching, colour-drenched lighting effects turned the festival’s main event this year into a truly vibrant spectacle. When colourful internationalism, the beats of electronic music and surreal mysticism come together, the ravers gather at the Tomorrowland
08-18-2015 | Industry, Real Estate & Constr …
A&O Lighting Technology GmbH
A&O Technology adds new brilliance to Dubai’s luxury icon
Burj Al Arab of Jumeirah, the icon of Dubai and one of the most expensive and luxurious hotels in the world, now affords an even more glittering spectacle in the night sky. The exchange and programming of the new high-tech lighting system was performed by local partner A&O Technology. Every evening, the Burj Al Arab offers a colourful light show. The changing hues and brilliant strobe effects enthuse millions of
08-18-2015 | Business, Economy, Finances, B …
A&O Lighting Technology GmbH
FALCON® BEAM 2 – A&O Technology launches new searchlight
In the new FALCON BEAM 2, A&O Technology is bringing a brilliant new searchlight onto the market. With its extended feature set, the FALCON BEAM 2 is now the first choice for demanding illuminations in the fields of entertainment and architectural lighting. Thanks to a new high-precision parabolic reflector with an ultra-reflective coating, the FALCON BEAM 2 guarantees dazzling brightness. The colour changer is based on the tried-and-tested technology

10-02-2014 | Arts & Culture
A&O Lighting Technology GmbH
A&O Creative presents light show for the 40th Bremerhaven Festival Week
July 2014, Bremerhaven – Every year, the city of Bremerhaven treats visitors to a waterside son et lumière in the harbour area – this year’s was the fortieth such show. On calm summer evenings, the surface of the water is like a mirror in which the spectacular productions of the Bremerhaven Festival Week are reflected. Dazzling beams of light this year danced over the Old Harbour and the New Harbour
01-22-2012 | Logistics & Transport
Mitsui O.S.K. Lines, Ltd.
The New World Alliance to Launch New Trans-Atlantic Service
Seoul, Singapore, Tokyo, 19 January 2012 –The New World Alliance (TNWA) – APL Co. Pte Ltd (APL), Hyundai Merchant Marine (HMM) and Mitsui OSK Lines (MOL) today announced the launch of a new Trans-Atlantic service connecting Europe and the UK with the US East Coast and Panama. The Americas Europe Express (AEE) service is TNWA's third dedicated Trans-Atlantic service. It offers multiple weekly sailings from major US and European ports, as
02-03-2011 | Tourism, Cars, Traffic
Connect Worldwide Recruiting Agency
1. Cruise Recruiting Day in Bremerhaven / Germany on 18.02.2011
For the first time in over 11 years of successful business history, the Connect Worldwide Recruiting Agency will arrange its first ‘Cruise Recruiting Day’ in Bremerhaven on February 18, 2011 from 9.30am to 6:30pm. Due to this maritime ‘job and recruiting fare’, the agency Connect is bringing the most famous and leading cruise companies in the cruise industry to Bremerhaven. Especially at the beginning of the year the cruise lines have many
02-22-2010 | Logistics & Transport
INPLAN GmbH
New sales partner for Norway and Denmark
IT@strategy GmbH, Duisburg, Germany is the new sales partner for Norway and Denmark of INPLAN GmbH, the German market leader in port management software. The dedicated IT sales and consulting company, IT@strategy GmbH will coordinate all sales activities for the INPLAN software suites Port Management and Maritime Traffics. “Expanding our activities to Northern Europe with the assistance of an experienced partner with local expertise is part of our strategy for international
02-19-2010 | Logistics & Transport
INPLAN GmbH
Port Management Software for US market
German based INPLAN GmbH, a specialist in Port Management software, has entered a co-operation with Logistics and Port Management Americas LLC (LPMA), Needham, Massachusetts, to develop the American market. The operator of container terminals, LPMA will coordinate INPLAN sales activities in the United States. “Their local practical experience make LPMA an ideal partner for the further development of our software for the US market with our IT and logistics experts. Following
12-21-2005 | Logistics & Transport
YA Logistics
KITT Car with a Difference
YA Logistics have recently imported the Knight Rider Industries Two Thousand (KITT) black Pontiac – star of the 1980’s series Knight Rider, staring alongside David Hasselhoff. As a special project cargo, the car was the star of its container. From moving the entire World Rally Championships around the Mediterranean Sea on a specially chartered Roll-on/Roll-off ferry, to one-off cargos like KITT, YA Logistics specialise in importing and exporting vehicles around
Comments about openPR
OpenPR ist the nicest and most clearly laid out PR platform I have seen to this day. The press releases are displayed very nicely and clearly and without any unnecessary frills. The updates are fast and the finished release looks appealing and is clearly legible. Even with 16 years of experience one discovers new things from time to time. Congratulations!
Gabriele Ketterl, Director Marketing & PR, Menads