A&O Middle East supports Maharashtra Day, one of the biggest shows in India 2010 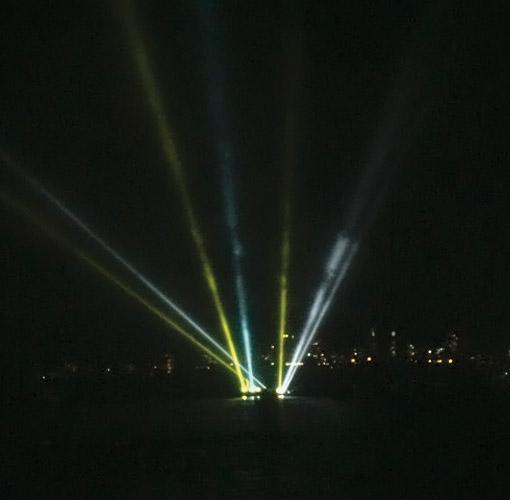 It was fifty years ago on the 1st May 1960 that the state of Maharashtra achieved sovereignty. In the years since, it has established itself as one of the most important states in India. The fiftieth jubilee was marked by an enormous celebration in the state’s capital Mumbai, formerly known as Bombay. Maharashtra Day, or Kaamgaar Din, is regarded as a red letter day in the Indian calendar.Done Events of Dubai ordered for this event ten FALCON BEAM 7000W and fourteen FALCON 6000 CMY searchlights from A&O Technology Middle East. For the lightshow on Marine Drive and the Corniche Road, ten FALCON BEAM 7000W searchlights were installed on floating platforms some 400 metres from the coast in a line running parallel to Corniche Beach. In addition, fourteen FALCON 6000 CMY units were installed on towers of scaffolding on the Corniche itself. From these vantage points, they were not only able to contribute to the Maharashtra Day beam show but also served to illuminate neighbouring buildings. For the control of the FALCON xenon searchlights, a Grand MA Full Size console was used as well as an MA Ultra Light. Lighting Designer Sonu A.B. created a spectacular show including music, lasers, lights and fireworks that drew an enthusiastic response from spectators.When the show was over, not only the Lighting Designer but also the client thanked the A&O team on location for their excellent work and cooperation.A&O Lighting Technology GmbH, which was founded by Marco Niedermeier, has been actively engaged in the hiring and sale of show and architectural lighting equipment since 1995. A&O's diverse inventory includes special LED equipment and several hundred searchlights (high-power xenon floodlights) that can be used for well-known entertainment- and architectural lighting applications. It also has the exclusive worldwide distribution rights to a variety of architectural luminaries and searchlights, such as the FALCON® range from alpha one. A&O Lighting Technology, with its head office in Germany, is active worldwide with subsidiaries and offices in UAE, USA and UK. For more information, visit: www.ao-technology.comJuly 2010 / A&O Lighting Technology GmbH, Industriestraße 31-33, 28876 Oyten, Germany, Telephone: 0 42 07 / 66 84-0, Internet www.ao-technology.com, Contact: Tanja Niedermeier

You can edit or delete your press release A&O Middle East supports Maharashtra Day, one of the biggest shows in India 2010 here

07-03-2018 | Arts & Culture
Paul Bennett Fine Artist LTD
THE LIGHT & THE DARKNESS
A new series of seascape and landscape oil paintings in Paul’s signature style, inspired by the wilds of Western Scotland and Skye. The work for these shows is based on the drama of play between light and darkness, heavily influenced by trips to Western Scotland and the Isle of Skye. The working process for this new series has been as destructive and creative as the landscapes seen in situ, but as
12-05-2013 | Science & Education
Fraunhofer IAO
Light quality in offices
The Light: Global study gets underway with online user survey Light has a fundamental impact on our sense of well-being and performance. In cooperation with Zumtobel, a supplier of lighting solutions, Fraunhofer IAO has launched a global user survey of lighting quality in offices. The objective is to identify the best lighting conditions for a variety of spaces and lighting situations. As we move through the darker winter months, many people become
10-26-2012 | Sports
Omron Healthcare
Light Improves Athletic Performance
A variety of factors influence athletic performance: Physical fitness and stamina, as well as the manner of nutrition, probably have the most impact. But a new study found another aspect, which had remained widely unconsidered: light. According to the study, the right lighting not only supports a higher capacity of concentration, but also positively influences stamina and performance in sports. Depending on the athlete’s body clock and the time of
10-23-2012 | IT, New Media & Software
Voyage Manager Ltd.
Voyage Manager Accounces VM Light
Voyage manager Ltd, a technology company that specializes in travel security and tracking solutions, has recently announced the release of VM Light, a user friendly itinerary tracking service. VM Light is a standalone itinerary tracker, designed for organizations that do not require the full functionality of the VM Suite, but are looking for a cost effective, simple travel tracker solution to increase employee security and efficient business travel. VM Light is
08-08-2011 | Health & Medicine
DigiGlyph, Inc.
Cooking Light Done Right
Seattle, WA August 5th, 2011 – DigiGlyph released a new series of cookbooks title Cooking Light Done Right authored by Kristi Rimkus, a healthy cooking blogger who is certified in nutrition and wellness by The American College of Healthcare Science. Each great tasting, healthy recipe comes with easy to follow instructions that include the nutritional value of each meal. The cookbooks are available as an eBook on Kindle & Nook
07-21-2009 | Industry, Real Estate & Constr …
MENTOR GmbH & Co. Präzisions-Bauteile KG
M-TUBE Flex: LED light system with flexible light guide
The M-TUBE is an LED light system designed as a construction set: The flexible light guide can be combined with LEDs in different colors and intensities. In this way it is possible to realize soft ambience illumination as well as illumination and lighting with strong brightness. The light is fed into the light guide from the sides. Inside the light guide it is evenly emitted along the imprinted white reflector line.
Comments about openPR
9 o'clock: discuss press release with client, 10 o'clock: submit release to openPR, within the briefest possible time release is published and displayed in a prominent place on openPR.de. I am thrilled!
Zehra Spindler, Calypso Now! - Communication Agency