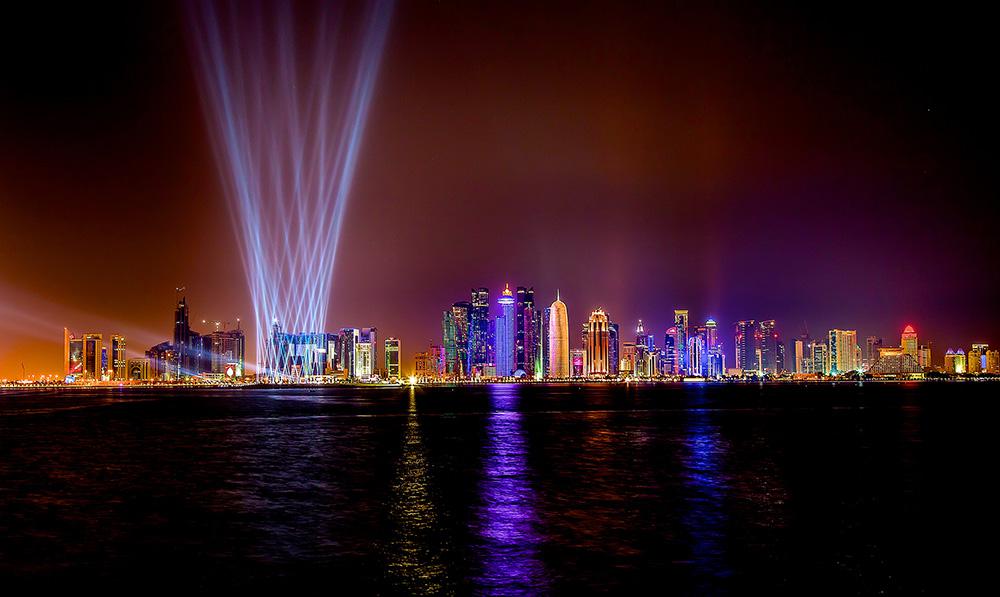 January 2014, Dubai/Doha – With three spectacular events, A&O Technology in the role of general contractor, along with its in-house creative department under the leadership of the lighting designer Jerry P. Appelt, was able to close out the year 2013 in style and hit the ground running in 2014. At the end of November, the lighting specialist bathed the Burj Khalifa in light to mark the announcement that the city had been chosen to host Expo 2020. On 18 December, a magnificent light show in Doha followed to mark National Day 2013, and a further superb lighting spectacle that included a record-breaking firework display on 31 December at the Atlantis, The Palm in Dubai heralded the advent of 2014. “A&O Technology is now excellently placed in terms of ideas and expertise to participate in shaping the future of the lighting sector,” says Marco Niedermeier, CEO.It began with the news that Dubai would be hosting Expo 2020. This will be the first time ever that the world’s fair is held in an Arab country. To mark the announcement on 28 November, A&O Technology bathed the 828-metre-high Burj Khalifa from top to bottom in blue and white light using xenon searchlights. This was also the first time the tower had been lit from all three sides to create a 360° illumination. The expo colours gave way at the end of the show to the colours of the national flag, to mark the United Arab Emirates’ National Day. To underline the role of the world’s highest building as a landmark visible from afar, A&O Technology pulled off a logistical masterstroke in a relatively short space of time. As the supplier of lighting equipment, A&O Technology was responsible for the technical and logistical planning including the peripherals. The A&O Creative team was responsible for the creative concept behind the illumination.Next it was time in Doha for Qatar to celebrate its own National Day. It does so on 18 December each year to celebrate its independence, this being the day Sheik Jassem bin Mohamed bin Thani, the founder of the state of Qatar, took power in the year 1878. The location of the installation for the National Day illumination was Old Palm Trees Island, which lies some 800 metres from the corniche lining Doha Bay in the Persian Gulf. This was the first time fireworks and moving searchlights had been installed in this rather cramped location and it required A&O Technology working closely with the pyrotechnicians. The highlight of the show was the first use of the ‘Double Twister’ composed of 7,000W searchlights flanked by fans of light spread by FALCON 6000 CMY searchlights. This architecture of light, formed by column-like beams, had already in a simpler form enthused onlookers in Azerbaijan and Muscat. For this event, A&O Technology installed FALCON BEAM colour 7,000W and FALCON 6000 CMY fixtures on the small island ‒ a logistical challenge in itself as all the equipment had to be transported there by ship. In the end, A&O Creative, the in-house creative department of A&O Technology, realized a light show that could be seen from 360° and began as an ambient show four days before the actual event. Every evening, from 7 pm to midnight, this ambient show became more elaborate, until guests and onlookers on the big day, 18 December, were able to witness the spectacle in its consummate splendour.Back in Dubai, setting-up operations then began in earnest at the Atlantis, The Palm. With the huge New Year’s celebrations at Dubai’s leading entertainment resort, which included a 360° facade illumination with searchlights, A&O Technology participated in a record-breaking production, as the accompanying firework display involved the use of some 500,000 individual fireworks! This was one Arabian night in which the sense of expressions like ‘sea of light’ and ‘riot of colour’ became abundantly obvious. With a six-minute lightshow, Dubai celebrated the arrival of the New Year at the Atlantis Resort in incomparable style. Accompanied by the Atlantis’s legendary Sandance Music Festival, the event drew partygoers in their thousands from all over the world. A&O Creative designed a lavish illumination with lush colours adorning the facade and moving searchlights on the roofs that could be seen for miles around. This was the first time that FALCON 6000 CMY searchlights had been employed as wall washes and they proved fully convincing in the role. On the beach side, the main public area, FALCON CMY LED-VIDEO moving LED/xenon hybrid searchlights with LED panels complemented the facade illumination and the play of beams from the roof. The installation of the FALCON BEAM colour 7,000W searchlights on the roof, incidentally, was also no simple matter, as the devices and equipment had to be moved through the lobby and up the stairs of the hotel while it was still receiving guests. Yet in spite of all the difficulties, A&O Creative managed in the end to make this already luxurious hotel even more magnificent and impressive, with rays reaching into the sky against a backdrop of pyrotechnics.For all three events, A&O Creative was responsible for the design, control, execution and operation of the light show, whilst A&O Technology appeared in the role of general contractor, also for each event.About A&O Technology:A&O Lighting Technology GmbH, founded by Marco Niedermeier, has been engaged since 1995 in the distribution and rental of specialized lighting equipment to numerous internationally recognized architectural and entertainment projects. Its exclusive distribution portfolio includes the A&O FALCON® range, which comprises a variety of architectural spotlights and searchlights manufactured by the in-house manufacturer alpha one.High-quality equipment, international cooperation and a creative team of employees have allowed A&O Technology to develop into an enterprise active worldwide in the distribution and rental of high-tech products for a wide range of applications — often to spectacular effect.A&O Technology is headquartered in Bremen, Germany, with subsidiaries or bureaus in UAE, USA, Russia and Asia and holds project partnerships worldwide.For more information about the company A&O Technology please visit the website www.ao-technology.comJanuary 2014 / A&O Lighting Technology GmbH, Arberger Hafendamm 22, 28309 Bremen, Germany, Telephone: +49 (0)421 / 59 66 09-0, Internet www.ao-technology.com, contact: Ljiljana Jurkovic