OFF THE WALL – From Vandalism to Urban Art 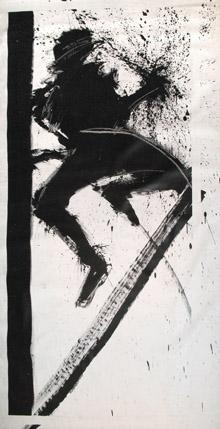 Since its early beginnings as an art form in the 1970’s, Street art, Graffiti – or Urban Art has been considered a transgression. Graffiti writers, who usually were not schooled in classical arts and didn’t adhere to the confines of the classical picture plane and its white cube dwellings became visible through the cracks of a society then desperately trying to re-define itself from the burden of modernity. Graffiti imagery owes close proximity to “tribal art” and early academic readings tended to bundle it with rebellious communities that operated outside of organized society. Some even considered the works and life styles of graffiti writers to embody urban criticism in its most democratic form. It was an art form dressed in anonymity, created without care for posterity, made without applying classic value systems and for the most part presented in such a way that it became a constant reminder of the decay of Western ideals and philosophies. On a conceptual plane, graffiti was the perfect form of vandalism and visually it was so different and misbehaving that it completely defined the era of civil disobedience of the 1980’s. From the early movement of graffiti writing grew Hip Hop culture in music, anarchist styles in fashion and a renewed interest in tribal dance, now in the form of Electric Boogie and Break Dance. Colonization and incorporation of any rebellious activity is the inevitable response of popular culture – soaking up every transgression to feed it back to the public as mainstream culture. Early communities of graffiti writers of the 1970’s and 80’s were soon added to the general language of the art world. The initial euphoria of this new art form however, soon wore off and “graffiti art” was deemed a passing fad, for lack of better academic support and art-world agendas. There was simply no platform to expand for any scholarship to evoke further meaning. The individuals within this group were considered unruly and uncontrollable, rendering them obsolete by any art market sense at the time and “graffiti art” was regurgitated by the art world as “unsophisticated and ill-fitting”. With “graffiti art” and the indifference it later endured from the art establishment, a rift between subject and object had been exposed, which created more problems than it could solve by its mere existence – hence graffiti’s initial decline as a marketable art form by the Mid-1980’s. Toward the end of the 1990’s, a different form of urban visual expression began to be noticed on the streets of major cities. This time it was inward looking, highly individualistic and performing within a language much different to the initial “tribal” works from some decades before. It emerged from a number of artists who had been seasoned by different means of communication, mainly the growing influence of the Internet and its default openness to exchange of information. But also the artists’ need to redefine visual space in the urban environment, now consolidating threats such as invasion of the personal sphere, objection to surveillance of commonly shared space and the threat to the private being in the public domain.The show, “Off the Wall”, at WILDE Gallery aims to examine the bridge between the earlier generations of street artists and the ongoing practice of current artists dealing with urban discourse.WILDE Gallery was founded September 2007 in Berlin and deals with contemporary art as well as art advisory services. The gallery shows 8 to 10 exhibition per year with international contemporary artists.WILDE Gallery Chaussee Straße 7 10115 Berlin +49(0) 30 258 16 258

04-27-2009 | Arts & Culture
WILDE GALLERY
EVOL - New Work at WILDE Gallery
Exhibition from May 1 - May 30 Opening reception at May 1th, 7pm EVOL's interests have focused on the overlooked and the refuse of urban society, offering visual comments and thoughts that remind us of the failure of modernism and its visions of an architectural utopia. EVOL draws our attention to the collective memory of places, a memory that is open ended, but in it’s decoding always seems to remain strangely personal.
03-23-2009 | Arts & Culture
WILDE GALLERY
EXHUMATION
WILDE Gallery is pleased to announce the solo exhibition of Kenno Apatrida, his first with the gallery on Friday March 27th. Apatrida’s works were recently displayed at SCOPE New York Art Fair, gaining great report and attention with the American public. Kenno Apatrida, originally from South America has spend the last 18 years in Berlin as an involuntary resident, goes against the tide of contemporary thought by unleashing works of art
02-05-2009 | Arts & Culture
WILDE GALLERY
Cartoon - Exhibition by Stephen Andrews
Stephen Andrews was born 1956 in Sarnia, Ontario. He lives and works in Toronto. Cartoon was curated by Doina Popescu, Ryerson Photography Gallery and Research Centre, Ryerson University, Toronto, Canada Cartoon is an animated adaptation of a car commercial and is a companion piece to The Quick and the Dead another animation based on footage of two soldiers in Iraq. Together they provide two very different takes on the current political situation.
08-20-2008 | Arts & Culture
WILDE GALLERY
INSIDE - Michael Luther
Michael Luther’s painterly world is that of the minutely intimate. The main sources for his pictures are found in his most immediate surroundings such as his studio, or even more in extreme close-up, the actual source for making pictures, namely the paints and art materials themselves. For WILDE Gallery, Luther has created a series of paintings depicting the very spaces in which they are to be shown. These are paintings

01-21-2021 | Business, Economy, Finances, B …
VOID International Media Group
Richard Breitengraser accepted into Forbes Business Council
CEO of VOID International Media Group joins the Forbes Council for global industry leaders. New York City/Berlin, January 19, 2020 — Richard Breitengraser, Founder & CEO of the VOID International Media Group has been accepted into the Forbes Business Council, the foremost organization for successful industry leaders worldwide. Richard Breitengraser was vetted and selected by a review committee based on the depth and diversity of his experience. Criteria for
12-03-2020 | Business, Economy, Finances, B …
Accelerate Financial Technologies Inc.
Richard Kang Joins Accelerate as Special Advisor
December 2, 2020- Accelerate Financial Technologies Inc. (“Accelerate” or the "Company") is pleased to announce that Richard Kang has joined the Company as Special Advisor. "We're excited to have Richard join the Accelerate team as Special Advisor to help lead our distribution and business development activities as we execute on our mission to democratize alternative investments," said Julian Klymochko, CEO of Accelerate. "Richard's long track record of success in the ETF
04-23-2012 | Arts & Culture
timeframehd.com
Richard Kirby’s Timeframe HD Goes Live
World renown documentary and wildlife cinematographer, Richard Kirby has launched a stunning new dedicated time-lapse website. Recently launched Timeframehd.com elegantly showcases all of Kirby’s extraordinary timelapse catalogue online, enabling easy access to the high definition broadcast quality footage to the wider broadcast and corporate world for the first time. The film-maker, a pioneer of this photographic technique, had his first big break creating timelapse for Peter Greenway’s iconic feature film
08-17-2011 | Arts & Culture
Light Space & Time Online Gallery
Richard Mittelstadt Featured in the Artist Showcase
Light Space & Time Online Art Gallery is extremely pleased to announce that Richard Mittelstadt is now featured in the Gallery’s Artist Showcase. Jupiter, Florida - August 16, 2011 -- Light Space & Time Online Art Gallery is extremely pleased to announce that Richard Mittelstadt is now featured in the Gallery’s Artist Showcase. Richard is a Minnesota based artist whose artistic talents are demonstrated in a broad array of styles, subjects
07-04-2011 | Arts & Culture
Artisan Galleries
Artisan Galleries present Richard Rowan
Essex, United Kingdom, (27 June 2011) – Artisan Galleries, a leading online supplier of affordable fine art with 5 celebrated galleries across London, are delighted to announce an exhibition by renowned glass artist Richard Rowan taking place on Thursday 30th June 2011 at the Artisan Fine Art, Epping gallery. Coming from a design and fine art background, Rowan won the Daily Mail’s 1992 ‘Artist of the Year’ award, but after finding
02-23-2010 | Tourism, Cars, Traffic
Relais & Châteaux Hertelendy Kastely
Experience the taste – Richard Nussel in Hungary
Foodies should rejoice: Now Relais & Châteaux Hertelendy Kastély expects you with the most exciting culinary experience. Richard Nussel has been leading the kitchen of the first Hungarian member of Relais & Châteaux since the beginning of this year. He accumulated his experience over 20 professional years in the most outstanding establishment of gastronomy, nearly all of them Michelin star restaurants. Amongst others he worked in the Grand Chef Relais
Comments about openPR
OpenPR ist the nicest and most clearly laid out PR platform I have seen to this day. The press releases are displayed very nicely and clearly and without any unnecessary frills. The updates are fast and the finished release looks appealing and is clearly legible. Even with 16 years of experience one discovers new things from time to time. Congratulations!
Gabriele Ketterl, Director Marketing & PR, Menads