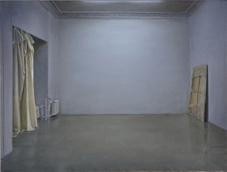 Michael Luther’s painterly world is that of the minutely intimate. The main sources for his pictures are found in his most immediate surroundings such as his studio, or even more in extreme close-up, the actual source for making pictures, namely the paints and art materials themselves. For WILDE Gallery, Luther has created a series of paintings depicting the very spaces in which they are to be shown. These are paintings that literally feed upon themselves in a birth-life cycle, that expose their content as a mirror image of the hyper real. Michael Luther’s method is meditative rather than conceptual and he approaches the painted picture plane, as would many process-based artists, through contemplation and at times through obsessive compulsion, which in a different age from ours may have been described as transcendental. “INSIDE” by Michael Luther opens at WILDE Gallery on Saturday, August 30th, 2008 from 19h (7pm). The exhibition opening coincides with the “Lange Nacht der Museen – Berlin” and the gallery will remain open past its normal hours until late. The exhibition runs from August 30th, 2008 until September 20th, 2008 A catalogue will accompany the exhibition with an introductory essay by Joakim Borda.WILDE Gallery Chaussestrasse 7 10115 Berlin +49 (0)30 258 16 258 mail@wilde-gallery.comwww.wilde-gallery.com

04-27-2009 | Arts & Culture
WILDE GALLERY
EVOL - New Work at WILDE Gallery
Exhibition from May 1 - May 30 Opening reception at May 1th, 7pm EVOL's interests have focused on the overlooked and the refuse of urban society, offering visual comments and thoughts that remind us of the failure of modernism and its visions of an architectural utopia. EVOL draws our attention to the collective memory of places, a memory that is open ended, but in it’s decoding always seems to remain strangely personal.
03-23-2009 | Arts & Culture
WILDE GALLERY
EXHUMATION
WILDE Gallery is pleased to announce the solo exhibition of Kenno Apatrida, his first with the gallery on Friday March 27th. Apatrida’s works were recently displayed at SCOPE New York Art Fair, gaining great report and attention with the American public. Kenno Apatrida, originally from South America has spend the last 18 years in Berlin as an involuntary resident, goes against the tide of contemporary thought by unleashing works of art
02-05-2009 | Arts & Culture
WILDE GALLERY
Cartoon - Exhibition by Stephen Andrews
Stephen Andrews was born 1956 in Sarnia, Ontario. He lives and works in Toronto. Cartoon was curated by Doina Popescu, Ryerson Photography Gallery and Research Centre, Ryerson University, Toronto, Canada Cartoon is an animated adaptation of a car commercial and is a companion piece to The Quick and the Dead another animation based on footage of two soldiers in Iraq. Together they provide two very different takes on the current political situation.
11-10-2008 | Arts & Culture
WILDE GALLERY
OFF THE WALL – From Vandalism to Urban Art
Since its early beginnings as an art form in the 1970’s, Street art, Graffiti – or Urban Art has been considered a transgression. Graffiti writers, who usually were not schooled in classical arts and didn’t adhere to the confines of the classical picture plane and its white cube dwellings became visible through the cracks of a society then desperately trying to re-define itself from the burden of modernity. Graffiti

03-12-2019 | Business, Economy, Finances, B …
The Insight Partners
Corporate Secretarial Services Market to 2025 – TMF Group, PwC, Deloitte, Maza …
The global corporate secretarial services market accounted to US$835.5 Mn in 2017 and is expected to grow at a CAGR of 7.3% during the forecast period 2018 – 2025, to account to US$1,440.5 Mn by 2025. Corporate secretarial services comprise services offered to ensure the company's compliance with the statutory and regulatory requirements. The service provider handles the client's company share transaction, act as an advisor to the company, and implement
02-02-2017 | Leisure, Entertainment, Miscel …
Punch TV Studios
The "Martin Luther King Jr. of Wall Street" Calls for Economic Empowerment
As one of only a few African-American CEOs of a publicly traded company, Punch TV Studios CEO Joseph Collins launched his company’s Initial Public Offering (IPO) in June 2016. Projections currently estimate the company will generate more than half a billion dollars in annual revenue by year four post the IPO. Joseph Collins is following up a hugely successful 2016, by continuing to redefine both the media, and Wall Street itself.
09-04-2013 | Associations & Organizations
Write Consult LLC
A Strategic Plan to Realize Dr. Martin Luther King’s Dream
An updated Universal, Common Strategic Plan for a Peaceful, Prosperous and Just World is being launched in coordination with the National Action Network’s Commemoration of the 50th anniversary of MLK’s “I Have A Dream” Speech at the 1963 March on Washington. This Plan, outlined on WethePeopleNow.org, proves that such a world is possible and shows how to achieve it. The August 24th launch is timed to correspond with thousands descending
01-24-2013 | Politics, Law & Society
The Law Offices of Jeffery M. Leving, Ltd.
At the 2013 Inauguration, President Barack Obama’s Legacy Entwines with Martin …
The inauguration of President Barack Obama will include nationally respected fatherhood advocate Jeffery Leving among its guests this Martin Luther King Day, 2013. In a ceremony symbolizing what Reverend Jesse Jackson, Jr. calls “the last lap of the unfinished race” for African-American equality, the re-elected President Obama will be sworn in for his second term on a day that all Americans associate with the nation’s greatest moral struggle. Mr. King’s non-violent
01-18-2012 | Business, Economy, Finances, B …
Rosendin Electric
Rosendin Electric Begins Construction of Martin Luther King Junior High School i …
New Design-Build Project Latest in Rosendin Electric's Growing List of Bay Area Public Works Projects. PITTSBURGH, Calif. (January 17, 2012) -- Rosendin Electric (http://www.rosendin.com), one of the nation’s largest private electrical contractors and a 100% employee-owned company, today announced the start of construction on the new Martin Luther King Junior High School. The new Pittsburgh Unified School District middle school is being built by Webcor Builders and Rosendin Electric holds the $3.3
08-26-2011 | Politics, Law & Society
Gardere Wynne Sewell LLP
Gardere Recognizes Dedication of Martin Luther King Jr. Memorial
DALLAS/HOUSTON – Gardere Wynne Sewell LLP continues its tradition of extolling the work and teachings of Dr. Martin Luther King Jr. and celebrates the upcoming dedication of the official Martin Luther King Jr. Memorial in Washington, D.C., on Sunday, August 28, 2011, the anniversary of Dr. King’s historic “I Have a Dream” speech. “Although harmful divisions haunt us still, we are uplifted by the timeless message of unity brought to us
Comments about openPR
I can't but agree to the positive statements about your portal: easy to use, clear layout, very good search function, and quick editing!
Jens O'Brien, Borgmeier Media Communication