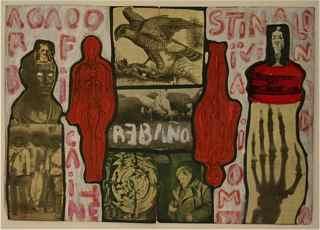 WILDE Gallery is pleased to announce the solo exhibition of Kenno Apatrida, his first with the gallery on Friday March 27th. Apatrida’s works were recently displayed at SCOPE New York Art Fair, gaining great report and attention with the American public.Kenno Apatrida, originally from South America has spend the last 18 years in Berlin as an involuntary resident, goes against the tide of contemporary thought by unleashing works of art that defy many current trends in art making. His works are phantasmagorical, spiritual and transcendental, humorous and painfully genuine. Apatrida’s practice refers to philosophical precursors, ranging from shamanistic rituals to the nightmares of William Blake and Henry Füseli, William Burroughs, political junk from the former GDR and Zen Buddhism. Apatrida’s works go through an alchemical process and are returned to us as icons of spirituality specific to our modern age, transformed to shrines of fallen empires, ancient mythology, cultural constructs and the many ghosts of the past that continue to both enrich and enslave the present.WILDE Gallery was founded September 2007 in Berlin and deals with contemporary art as well as art advisory services. The gallery shows 8 to 10 exhibition per year with international contemporary artists.WILDE Gallery Chausseestr. 7 10115 Berlin +49 (0)30 258 16 258 www.wilde-gallery.com

You can edit or delete your press release EXHUMATION here

04-27-2009 | Arts & Culture
WILDE GALLERY
EVOL - New Work at WILDE Gallery
Exhibition from May 1 - May 30 Opening reception at May 1th, 7pm EVOL's interests have focused on the overlooked and the refuse of urban society, offering visual comments and thoughts that remind us of the failure of modernism and its visions of an architectural utopia. EVOL draws our attention to the collective memory of places, a memory that is open ended, but in it’s decoding always seems to remain strangely personal.
02-05-2009 | Arts & Culture
WILDE GALLERY
Cartoon - Exhibition by Stephen Andrews
Stephen Andrews was born 1956 in Sarnia, Ontario. He lives and works in Toronto. Cartoon was curated by Doina Popescu, Ryerson Photography Gallery and Research Centre, Ryerson University, Toronto, Canada Cartoon is an animated adaptation of a car commercial and is a companion piece to The Quick and the Dead another animation based on footage of two soldiers in Iraq. Together they provide two very different takes on the current political situation.
11-10-2008 | Arts & Culture
WILDE GALLERY
OFF THE WALL – From Vandalism to Urban Art
Since its early beginnings as an art form in the 1970’s, Street art, Graffiti – or Urban Art has been considered a transgression. Graffiti writers, who usually were not schooled in classical arts and didn’t adhere to the confines of the classical picture plane and its white cube dwellings became visible through the cracks of a society then desperately trying to re-define itself from the burden of modernity. Graffiti
08-20-2008 | Arts & Culture
WILDE GALLERY
INSIDE - Michael Luther
Michael Luther’s painterly world is that of the minutely intimate. The main sources for his pictures are found in his most immediate surroundings such as his studio, or even more in extreme close-up, the actual source for making pictures, namely the paints and art materials themselves. For WILDE Gallery, Luther has created a series of paintings depicting the very spaces in which they are to be shown. These are paintings