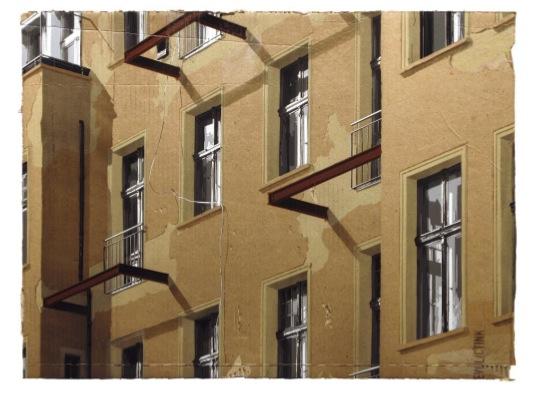 Exhibition from May 1 - May 30 Opening reception at May 1th, 7pmEVOL's interests have focused on the overlooked and the refuse of urban society, offering visual comments and thoughts that remind us of the failure of modernism and its visions of an architectural utopia. EVOL draws our attention to the collective memory of places, a memory that is open ended, but in it’s decoding always seems to remain strangely personal. The artists’ exploration of urban sites and the visual ‘background’ noise of the city is a stark reminder of the transience of life as well as the certainty of death. The pictures of EVOL are quite literally decaying from their moment of inception. The artist places materiality itself in the forefront of his expression of the urban condition, its promise of ruin and eventual cyclical gentrification. Architectural elements dominate EVOL’s images and their photographic precision is the result of a multitude of labour-intensive stencils that are layered, applied and traced with spray cans on found wood and discarded cardboard. It is a reverse imaging process that finally arrives at a model of representation that is not painting, not photography, not graffiti and not drawing, but a synthesis of them all. For his first solo show with the gallery, EVOL presents a Four by Three meter installation titled “Flamingo Beach – Later” consisting of a meticulously stencilled environment that oscillates between a real transitory space and an imaginary faux location that plays on the idea of the cinematic prop as well as collective suspension of disbelief.In 2007, EVOL was approached to create the design for a corridor at the Flamingo Beach Lotel. This infamous art-hotel was based in the Berlin suburb of Neukölln, a multi cultural area containing one of Berlin’s most authentic but poorest neighbourhoods. Guests of the hotel, which in fact was a legalized squat, would pay virtually nothing for a room and in return were able to choose from spending a night inside a video installation, a deserted island, an all encompassing chessboard or to sleep in the colour White. EVOL’s signature style architectural commentaries took on a new level with this project, where he had to approach a three-dimensional space that was both an installation, but also a functional transitory space. The hotel was closed in the summer of 2008 and the original installation was discarded and returned to surplus. “Flamingo Beach – Later” thus reappears as a memory of the original, now presented as a freestanding sculpture.Having gained notoriety at last year’s art fairs in Miami Beach and during the Armory Art-Week in New York in March, EVOL’s works have been acquired by leading international collectors and several works are currently being discussed for inclusion with US and European museums. In the summer 2009 EVOL will participate at OSTRALE 2009 in Dresden and the exhibition “Street/Studio” at Irvine Contemporary, Washington DC. His works have been extensively highlighted in the new book: Beyond Architecture (Gestalten Verlag, 2009) A catalogue accompanies the exhibition with an interview by Carson Chan.WILDE Gallery was founded September 2007 in Berlin and deals with contemporary art as well as art advisory services. The gallery shows 8 to 10 exhibition per year with international contemporary artists.WILDE Gallery Chausseestr. 7 10115 Berlin +49 (0)30 258 16 258 www.wilde-gallery.de pieper@wilde-gallery.de

03-23-2009 | Arts & Culture
WILDE GALLERY
EXHUMATION
WILDE Gallery is pleased to announce the solo exhibition of Kenno Apatrida, his first with the gallery on Friday March 27th. Apatrida’s works were recently displayed at SCOPE New York Art Fair, gaining great report and attention with the American public. Kenno Apatrida, originally from South America has spend the last 18 years in Berlin as an involuntary resident, goes against the tide of contemporary thought by unleashing works of art
02-05-2009 | Arts & Culture
WILDE GALLERY
Cartoon - Exhibition by Stephen Andrews
Stephen Andrews was born 1956 in Sarnia, Ontario. He lives and works in Toronto. Cartoon was curated by Doina Popescu, Ryerson Photography Gallery and Research Centre, Ryerson University, Toronto, Canada Cartoon is an animated adaptation of a car commercial and is a companion piece to The Quick and the Dead another animation based on footage of two soldiers in Iraq. Together they provide two very different takes on the current political situation.
11-10-2008 | Arts & Culture
WILDE GALLERY
OFF THE WALL – From Vandalism to Urban Art
Since its early beginnings as an art form in the 1970’s, Street art, Graffiti – or Urban Art has been considered a transgression. Graffiti writers, who usually were not schooled in classical arts and didn’t adhere to the confines of the classical picture plane and its white cube dwellings became visible through the cracks of a society then desperately trying to re-define itself from the burden of modernity. Graffiti
08-20-2008 | Arts & Culture
WILDE GALLERY
INSIDE - Michael Luther
Michael Luther’s painterly world is that of the minutely intimate. The main sources for his pictures are found in his most immediate surroundings such as his studio, or even more in extreme close-up, the actual source for making pictures, namely the paints and art materials themselves. For WILDE Gallery, Luther has created a series of paintings depicting the very spaces in which they are to be shown. These are paintings