Estrada Takes His Act to The Comedy Zone 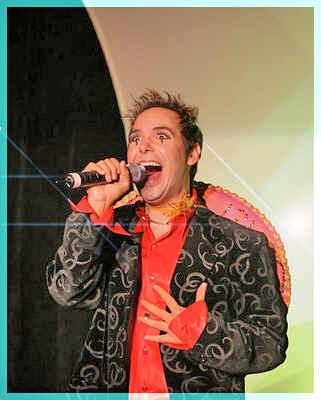 Comedian Jade Esteban Estrada has been called “genuinely funny” by Minneapolis-St. Paul Magazine. He will appear for one performance only at The Comedy Zone in Tallahassee Jun 9. Photo by THOMAS DOWNS.

June 8, 2008 – Tallahassee, FL – Jade Esteban Estrada, the host of the 19th Annual South Florida GLAAD Media Awards on the Bravo Network, will deliver his award-winning solo musical comedy “ICONS: The Lesbian and Gay History of the World, Vol. 3” at 8:00 p.m. Monday, June 9, 2008 to The Comedy Zone located at 401 East Tennessee Street in Tallahassee, Florida. Tickets are $10 at the door. The performance is the first event in a weeklong celebration for Tallahassee PrideFest 2008.

No stranger to Tallahassee, Estrada took home the award for ‘Entertainer of the Year’ at the 2006 Rainbow Awards presented by The Family Tree of Tallahassee.

The Canadian-based comedy web site The Comedy Green Room named Estrada the ‘Comic of the Week.’

“You definitely shouldn’t miss New York-based solo performer Jade Esteban Estrada, who has made a career of one-man shows in which he plays various historical gay figures,” states Mark Lowry of the Fort Worth Star-Telegram.

ICONS: The Lesbian and Gay History of the World. Vol. 3 won the awards for Best Solo Performance and Best Original Music at the 2006 Columbus National Gay and Lesbian Theatre Festival. In the show he portrays biblical Naomi, King James, Bessie Smith, Greg Louganis and Mary Cheney, the daughter of Vice-President Dick Cheney.

Steve Marsh of Minneapolis-St. Paul Magazine calls him “genuinely funny…one of the finest solo theatre artists of the 21st century.”

Estrada also stars in the upcoming sci-fi action film “The Innocent Killers” where he plays a gay assassin.