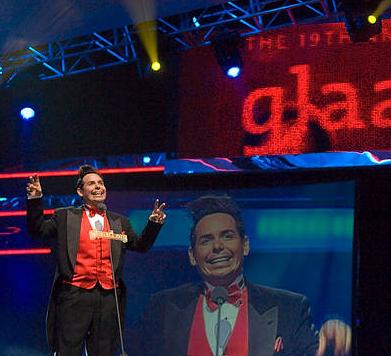 Comedian Jade Esteban Estrada plays many characters in "A Lullaby for Ryan: The History of HIV/AIDS in America." Photo by MITCHELL ZACHS.

April 25, 2008 – Billings, MT – Solo theatre artist Jade Esteban Estrada (2005 Performance Artist of the Year) earned a standing ovation for his original solo musical comedy “A Lullaby for Ryan: The History of HIV/AIDS in America” on Friday, March 7, 2008 at the Venture Theatre in Billings, Montana. The northwest premiere of the show was produced by the Yellowstone AIDS Project (YAP) and New York-based Vicarious Productions. Proceeds benefited YAP, a not-for-profit organization that offers HIV testing, community outreach and presentation, emergency support, housing assistance and other services to persons in Montana living with HIV/AIDS. For more information visit www.getjaded.com. Written and performed by Estrada, “A Lullaby for Ryan” chronicled the last quarter century of the AIDS epidemic in the United States with stories of courage, strength and human triumph. A reception was held in the theatre lobby after the show where the television actor met patrons and signed autographs.The show originally premiered at the Metropolitan Community Church of Omaha in conjunction with the Omaha AIDS Quilt Display in December 2007.“I have been hearing rave reviews from everyone who attended. We all appreciated the humor, compassion, and truthful way in which Jade portrayed many facets of this cause. We were all laughing with him and at ourselves and we left feeling bonded by the experience,” said Shelley Hayes, Executive Director of YAP.“In his performance, history and humor meld together to create a rich, insightful, and unforgettable experience. His dedication to each character made it easy for the audience to sympathize with some of the real faces behind HIV/AIDS, while allowing us to be carried away by laughter at just the right times. We admire his ability to tap into the human side of HIV and celebrate the stories of strength and courage that inspire us all,” said Tasha LeClair, Program Associate of YAP.See an interview with Estrada on YouTube. http://www.youtube.com/watch?v=1Aw4E7poel4 Estrada recently hosted the 19th Annual South Florida GLAAD Media Awards for Bravo TV and also debuted his own a designer humor line of bilingual greeting cards, “Jade Esteban Estrada for Nos Vemos Greetings.”He stars in the upcoming feature film “The Innocent Killers” directed by Brett Mauser. For further information or to request high resolution artwork or an interview, please contact Greta Golding at vicariouspr@aol.com, call 646-342-8647 or visit www.getjaded.com.Vicarious New York 145 West 45th Street New York, New York 10036 vicariouspr@aol.com www.getjaded.com 646-342-8647Vicarious Productions produces the nationally touring shows of multimedia star Jade Esteban Estrada.