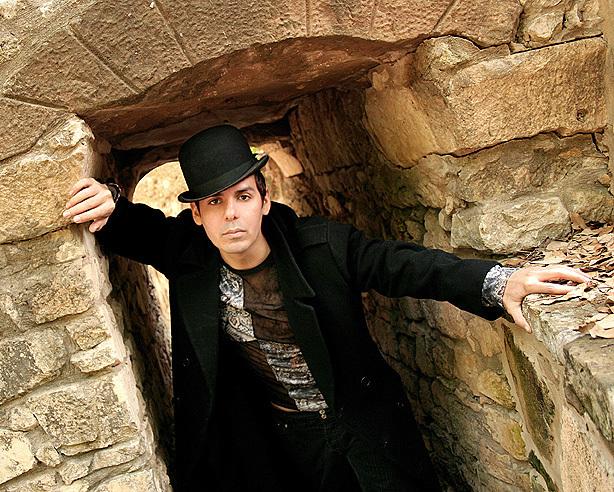 Multiple award-winner Jade Esteban Estrada has made a name for himself as "a man of many faces". He brings his popular solo play "Tortilla Heaven" to YVCC May 18. The show is written by his sister Celeste Angela Estrada. Photo by FADELA CASTRO.

May 2, 2007 - New York, N.Y. - One Man. Two Languages. Three Generations. Yakima Valley Community College and Vicarious Productions are proud to announce the Yakima debut performance of the award-winning solo comedy TORTILLA HEAVEN, written by Celeste Angela Estrada and performed by nationally acclaimed solo theatre artist Jade Esteban Estrada (2005 Performance Artist of the Year) at 8:00 p.m. Friday, May 18, 2007. The bilingual performance will be held at Kendall Hall located at South 16th Avenue and Nob Hill Boulevard at Yakima Valley Community College in Yakima, Washington. The show is presented as part of “A Series To Realize Yakima’s Promise: Expanding Our World Through Cultural Diversity.” The event is wheelchair accessible. Show duration is 65 minutes with no intermission. The celebrated actor will hold a Q and A session after the show and also sign autographs. Ticket prices are $5 general admission and free for students and seniors. The bilingual performance is open to the public and appropriate for all ages and linguistic abilities. For information call (509) 574-6800 extension 3151 or log onto www.getjaded.com.

Estrada’s last appeared in Washington at Washington State University in Pullman with his new solo show “Pico de Gallo.” The popular “Tortilla Heaven” has played twice at WSU in 2006.

“A multifaceted entertainer…laughs will roll in from audience members,” states Bobby Bush of the Corpus Christi Caller-Times.

“The monologue at the end, done by the character Charles is one of the best and most poignant realities that many within the Mexican community face,” states W. Brian Moore of QBliss.net.

"Transforming from one character to the next, Estrada unravels a multitude of stories, songs and humorous contradictions in celebration of the heartbeat of Latino culture," says the Boise Weekly.

Winner of the 2004 Literary Award for Best Play, "Tortilla Heaven" is a solo play written by Celeste Angela Estrada and performed by her brother, Comedy Central’s Jade Esteban Estrada. The piece tackles the struggles of a Mexican American family seeking to hold on to their culture while living in the United States. The Estrada siblings shed a comedic light on the struggle that many second and third generation Mexican Americans go through as they balance between abandoning their heritage and assimilating entirely into their new location.

Estrada plays seven characters in the bilingual play in order to show the different types of people and personalities that make up a traditional Mexican family in today’s society. Each character has their own unique struggle as they try to grasp the American culture while also staying true to their Mexican roots, culture, language and ultimately themselves. The show is directed by Los Angeles-based David Miguel Estrada, younger brother to the actor and playwright.

Formally the choreographer to television personality Charo and a scratch vocalist for the Back Street Boys, Estrada released his debut CD "Angel" (Vicarious) in 2001 and in 2002 took part in the "Being Out Rocks" (Centaur) CD compilation in honor of National Coming Out Day for the Human Rights Campaign.

In October 2006, Kentucky Governor Ernie Fletcher paid tribute to Estrada by commissioning him the title of "Kentucky Colonel," the highest honor awarded by the Commonwealth of Kentucky that acknowledges outstanding ambassadors of goodwill and fellowship around the world. The Texas native joined other honorary colonels which include Winston Churchill, Ronald Reagan, Bob Hope, Joan Crawford, Johnny Depp, Muhammad Ali and Pope John Paul II.

Estrada's television credits include appearances on the Emmy-nominated "In the Life TV" on PBS, "Friday Night Lights" on NBC and "The Graham Norton Effect" on Comedy Central. His popular Latin dance music can be heard on the Golden Globe and Emmy award-winning police drama, "The Shield" on the FX Network.

Tom Sime of the Dallas Morning News calls Estrada, "...funny and irreverent." "Most performers would be happy to have a fraction of Jade Esteban Estrada's career," states Marty Rosen of the Louisville Courier-Journal. Hector Saldana of the San Antonio Express-News calls him "a show biz messiah." Roy Proctor of the Richmond Times-Dispatch calls him "a master entertainer."

Estrada will perform a 30-city tour during Hispanic Heritage Month of “Tortilla Heaven.”

For further information or to request high resolution artwork or an
interview, please contact Greta Golding at vicariouspr@aol.com, call
646-342-8647 or visit www.getjaded.com.

"Estrada may be one of the finest solo theatre artists of the 21st century."
OUTLOOK WEEKLY