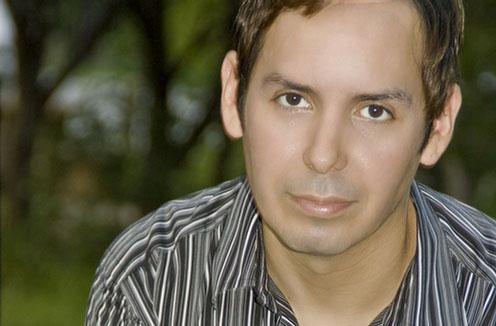 Comedian Jade Esteban Estrada has been called the "first gay Latin star" by The Advocate and Out Magazine. He has been named ‘Comic of the Week.’ Photo by FRED MOSES.

Estrada has been featured on “The Graham Norton Effect” on Comedy Central and most recently has been cast in the new video game “Bruiser and Scratch” for Steel Penny Games. His music can be heard on “The Shield” on the FX Network. Other television appearances include “Friday Night Lights” on NBC and “In The Life” on PBS.

“Estrada is not an icon by accident,” raves Nicholas Snow of Notes from Hollywood. “You’ll laugh your butts off when Jade Esteban Estrada takes the stage,” warns Out Magazine. The Oklahoma Gazette calls him a “prominent and controversial gay Latin performer.” The Advocate calls him “the first gay Latin star.”

The former Charo choreographer and scratch vocalist for the Back Street Boys has been known for his highly acclaimed solo theatre shows including “Tortilla Heaven” and “ICONS: The Lesbian and Gay History of the World, Vol. 1.”

The San Antonio native began his comedic career when he won the Best Amateur Comic in New York Competition in 1995 at Stand Up N.Y. He has appeared at Rivercenter Comedy Club and Gotham Comedy Club among others.

Estrada begins work on the film “Callous” directed by Joey Lanai in Los Angeles in mid-August and his self-penned book “Impersonating Sappho” is scheduled for a November release.