First Fridays in Southtown the Focus of New Comedic Documentary 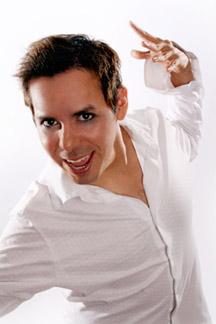 Comedian Jade Esteban Estrada is Ennis P. Degollado in "Ennis Does Southtown" at the Seguin Film and Arts Festival. Photo by PATRICK PATTERSON.

October 21, 2008 – Seguin, TX – The 4th Annual Seguin Film and Arts Festival has chosen the new comedic documentary “Ennis Does Southtown” as an official selection to screen at 9:00 a.m. Saturday, October 25, 2008 at the Palace Theatre located at 314 South Austin in Seguin, Texas. The film stars comedian Jade Esteban Estrada. Admission is $3 for the general public and $2 for students and seniors. For more tickets and reservations contact 830-372-1928 or email info@seguinfestival.org. Information can also be found at getjaded.com.

‘”Ennis Does Southtown” was a big hit at the McAllen Arts and Film Festival when it premiered two weeks ago,” said Suta. “Ennis seems to strike a chord with people. He’s just so much fun to watch!”

“Ennis Does Southtown” was an official selection of the McAllen Art and Film Festival in September.

Formally the chief choreographer to Latin diva Charo and a scratch vocalist for the Back Street Boys, the comic has appeared on the Emmy award-winning television show “30 Rock” as well as “The Graham Norton Effect” on Comedy Central. He was also the host of the 19th Annual South Florida GLAAD Media Awards on Bravo. Katie Schardl of the Tallahassee Democrat calls him “an effervescent entertainer.”

Estrada is also the star of the new vampire film “Blood Rivals: Santos el Vampiro” which made its world premiere at the San Antonio Local Film Festival at the Empire Theatre on October 10, 2008 directed by Carlos Pina. He was also the co-host of the 25th Annual Gay Fiesta event which was held on October 5, 2008 at the historic Sunken Gardens Theatre in San Antonio’s Brackenridge Park.