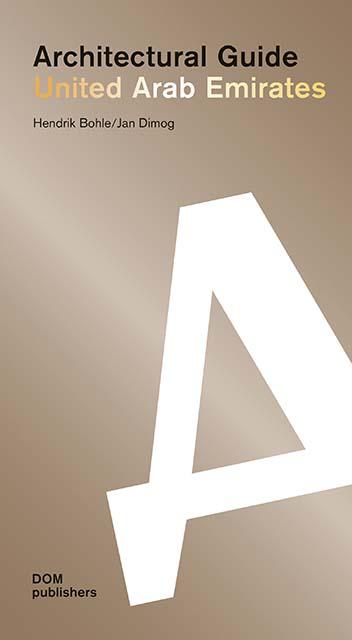 Architecture and the United Arab Emirates: these keywords almost automatically provoke thoughts of the headline-grabbing and record-breaking architecture in Abu Dhabi and Dubai. A closer inspection, however, reveals neo-traditional edifices in Sharjah or ambitious structures and trendsetting projects in the smaller emirates. Furthermore, there are numerous examples of a new generation of Emirati architecture, whose focus lies on sustainability and the preservation of diverse building traditions. The architecture in the emirates is thus an expression of a greater creative diversity than one may imagine at first sight.The Architectural Guide United Arab Emirates presents more than 200 buildings and projects from this still young country which has been catapulted within three generations from austere Bedouin culture into the era of the Burj Khalifa. The authors Hendrik Bohle and Jan Dimog portray all seven emirates in separate chapters, with a particular focus on the glittering Dubai, the sophisticated Abu Dhabi and the cultural capital of Sharjah, imbued with tradition. These not only lead to well-known highlights, but also into remote corners, showing traditional architecture - albeit in short supply - such as fortresses, souks, wind towers and the residential buildings of wealthy merchants. Furthermore, they address efforts to maintain subjects of architectural heritage such as, for example, the Heart of Sharjah project. Excursions into special locations and portraits of architects and artists who constitute important figures within the region paint a vibrant picture of current architecture. A comprehensive glimpse behind the scenes of this dynamic country is afforded by interviews not only with international and local project developers, but also with representative figures from other fields, such as hotel and museum directors, a tour guide and the political affairs advisor from the UAE Embassy in Berlin.The authors cast a critical eye over the multifaceted architecture and visionary construction projects of the UAE, thus presenting a complex portrait of this ever-evolving land.The Architectural Guide Istanbul has also been written by the same authors. Architectural guides on Cairo and Iran will also afford the reader insight into the Middle Eastern world.Hendrik Bohle ∕ Jan Dimog Architectural Guide United Arab Emirates 135 × 245 mm, 540 pages 1.090 images, Softcover ISBN 978-3-86922-508-1 (English) EUR 48,00 September 2016. DOM publishers, BerlinThe travel guides by DOM publishers are intended for those interested in building culture and are presented in a convenient format. A careful selection of projects and expert proofreading make these books a (lexical) reference work, while background information and a fresh design stimulate imaginary journeys. The series was awarded an Iconic Award 2014 by the German Design Council. For further information see: www.dom-publishers.comgisela graf communications supports publishers, museums and institutions specialising in architecture, design or art, with professional press and PR work, also on an international level. Communications — Individual concepts and texts for media relations Connections — Media contacts, interview arrangements, events — anything that brings people and subjects together Corrections — Editing and copy editing of texts and specialised publications, catalogues and brochuresgisela graf communications Gisela Graf Schillerstr. 20 D 79102 Freiburg T +49 761 791 99 09 F +49 761 791 99 08 contact@gisela-graf.com www.gisela-graf.com