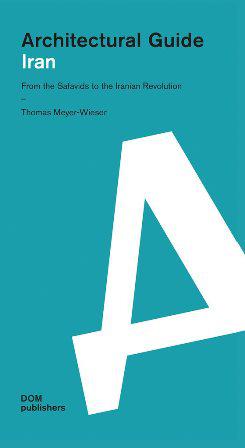 From the Safavids to the Iranian RevolutionIran has one of the oldest urban cultures, dating back over 4,000 years. In the Architectural Guide Iran, the author and architect Thomas Meyer-Wieser explores Iranian architecture, from the Safavids to the Iranian Revolution, with the help of 360 buildings and projects in Isfahan, Shiraz, and Tehran. On the fictional tour of these three cities - alternating capital, depending on the ruling dynasty - detours lead to other historically significant places such as Tabriz, Qazvin, or Firuzabad. Since 642 A.D. (the Islamic conquest), the Persian building culture was transformed, influencing architects and artists as far as Central Asia to the north and India to the east. As in hardly any other oriental country, despite its constant changes, an independent urban and architectural development - a major contribution to world architecture - is depicted. The book focuses on the identity of the Iranian-Islamic architecture, which is self-assertive since the Sovereignty of the Safavids in 1501 A.D. The country's economically robust and stable political system - still operative today - required a functioning infrastructure for the flourishing trade, as evidenced by a new architectural expression that mostly manifested itself in Isfahan. Meyer-Wieser follows the path of architecture and its interdependence in politics and economy to Shiraz, and finally to the modern, capital of Tehran. He also takes his readers on excursions to Persian garden architecture that anticipated the idea of the city during the early history of the Persian Empire, on to the architecture of the Iranian revolution, and presents the young architectural genre of today's Islamic Republic of Iran. This Architectural Guide Iran imparts travelers - as well as those at home - with a synopsis of Iranian architectural history, in the overall context of the political, economic, and ideological - or religious - developments of the Persian country, and brings together that which is generally known as fragmented.Thomas Meyer-Wieser Architectural Guide Iran From the Safavids to the Iranian Revolution 134 x 245 mm, 576 pages 1,600 pictures, softcover ISBN 978-3-86922-570-8 (English) EUR 48,00 June 2017. DOM publishers, BerlinThe Architectural Guides by DOM publishers are handy travel companions for readers interested in architecture and culture. Projects are carefully selected and researched to make each individual book a ready work of reference, while background information and attractive design inspire armchair travellers to imaginary journeys. In 2014, the series was awarded with the "Iconic Award“ by the German Design Council, and in 2016 with the "German Design Award Special“. Further information: www.dom-publishers.comgisela graf communications supports publishers, museums and institutions specialising in architecture, design or art, with professional press and PR work, also on an international level.Communications — Individual concepts and texts for media relations Connections — Media contacts, interview arrangements, events — anything that brings people and subjects together Corrections — Editing and copy editing of texts and specialised publications, catalogues and brochuresgisela graf communications Gisela Graf Schillerstr. 20 D 79102 Freiburg T +49 761 791 99 09 F +49 761 791 99 08 contact@gisela-graf.com www.gisela-graf.com