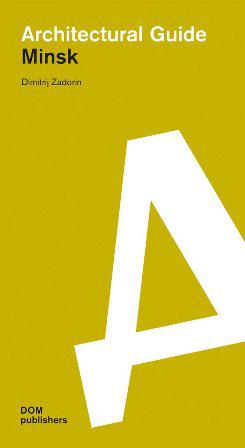 Minsk, founded in 1067, was a small, inconspicuous town lost in the backwoods of Eastern Europe for many centuries. Ironically, it was the devastation caused by the Second World War that drove the Soviet authorities to transform Minsk into a major city of true importance. The post-war development turned Minsk into one of the world’s fastest growing cities in the 1960s and 1970s and also left behind bright, visible traces of how ideas of the ‘perfect’ Soviet city changed over time. Today Minsk is seen by many as a reserve of Soviet architecture and city planning, situated in a rather peculiar political and economic context.The Architectural Guide Minsk presents not only the city’s popular attractions, it offers a comprehensive picture of all layers and aspects of the city. The architectural works presented range from 17th century churches to arenas and hotels built for the 2014 Ice Hockey World Championships; from iconic symbols of the capital to the distant but intriguing outskirts. This volume also focuses on the twentieth century and the industrial housing of Soviet Modernism, which particularly defines the cityscape of Minsk.The author and architect, Dmitrij Zadorin, who himself comes from Minsk, tells the story of the city by presenting what he calls its ‘seven faces’: 200 buildings, ten squares, five war monuments, seven parks, all metro stations, as well as ten residential estates and twenty mass housing series that together contributed to what became known as the ‘Minsk Phenomenon’. The volume is structured geographically, and its ten chapters offer a sweeping tour, from the old city in the pre-war centre, to the Socialist City, through to the city’s suburbs, each of which forms its own coherent spatial unit.This thoroughly researched 500-page architectural guide can claim to be a comprehensive documentation of Minsk, offering a representative overall picture of the Belarusian city.Dimitrij Zadorin Architectural Guide Minsk 134 × 245 mm, 540 pages 900 pictures, softcover, ISBN 978-3-86922-239-4 (english) € 38,00 / CHF 46,40 July 2018. DOM publishers, BerlinThe Architectural Guides by DOM publishers are handy travel companions for readers interested in architecture and culture. Projects are carefully selected and researched to make each individual book a ready work of reference, while background information and attractive design inspire armchair travellers to imaginary journeys. In 2014, the series was awarded with the „Iconic Award“ by the German Design Council, and in 2016 with the „German Design Award Special“. Further information: www.dom-publishers.comgisela graf communications supports publishers, museums and institutions specialising in architecture, design or art, with professional press and PR work, also on an international level. Communications — Individual concepts and texts for media relations Connections — Media contacts, interview arrangements, events — anything that brings people and subjects together Corrections — Editing and copy editing of texts and specialised publications, catalogues and brochuresgisela graf communications Gisela Graf Schillerstr. 20 D 79102 Freiburg T +49 761 791 99 09 F +49 761 791 99 08 contact@gisela-graf.com www.gisela-graf.com

10-08-2021 | Industry, Real Estate & Constr …
QY Research, Inc.
Vibrostand Market Present Scenario and the Growth Prospects 2021-2027 | Minsk, C …
The report titled Global Vibrostand Market is one of the most comprehensive and important additions to QY Research’s archive of market research studies. It offers detailed research and analysis of key aspects of the global Vibrostand market. The market analysts authoring this report have provided in-depth information on leading growth drivers, restraints, challenges, trends, and opportunities to offer a complete analysis of the global Vibrostand market. Market participants can use
01-28-2021 | Health & Medicine
Elemed
New generation cardiological gamma camera has been put into operation at the Min …
Spectrum Dynamics Medical D-SPECT Belarus The first specialized cardiological gamma camera D-SPECT manufactured by the Israeli company Spectrum Dynamics Medical has been installed in the Isotope Laboratory with the functions of radionuclide diagnostics of the Minsk Clinical Consultative and Diagnostic Center. The use of innovative semiconductor detectors based on cadmium-zinc telluride in the D-SPECT gamma camera made it possible to expand its capabilities, reduce the dose load on the patient while reducing
05-12-2020 | Advertising, Media Consulting, …
QY Research Inc.
Vibrostand Market Opportunities and Competition 2020-2026 | Minsk, CAC, ZhuoQin
Detail Market Research on Global Vibrostand Market 2020 with Industry Insights, Trends, Competition, Growth Analysis and Forecast by 2026. The global Vibrostand market has been garnering remarkable momentum in the recent years. The steadily escalating demand due to improving purchasing power is projected to bode well for the global market. QY Research's latest publication, titled global Vibrostand market, offers an insightful take on the drivers and restraints present in the market.
12-06-2016 | Energy & Environment
BPC Engineering
BPC Engineering Commissioned Microturbine CHP Plant for Cardiac Center in Minsk
An advanced microturbine power plant was commissioned in Minsk for the Scientific and Practical Center «Cardiology» of the Ministry of Health of Belarus. BPC Engineering was the main contractor for the project performing generating equipment supply (microturbines with integrated heat recovery modules), installation supervision and pre-commissioning. This installation is crucial in securing uninterruptible operation of the center. The opening ceremony participants included Mikhail Malashenko, the Deputy Chairman the Federal Agency
10-28-2010 | Politics, Law & Society
BelTA
OSCE ODIHR observation mission to arrive in Minsk in early November
MINSK, 27 October (BelTA) – Long-term observers from OSCE Office for Democratic Institutions and Human Rights are expected in Minsk in early November, Head of the OSCE Office in Minsk Benedikt Haller told media on 27 October. A total of 40 long-term and nearly 400 short-term observers are expected to arrive. OSCE long-term observation mission will focus on the social and political situation in the country, election legislation and its application, monitor
07-21-2008 | IT, New Media & Software
Itransition Software
Sergey Gvardeitsev, CEO of ITransition, winner of “Man of Business 2008” awa …
Minsk, Belarus – July, 10, 2008 – Sergey Gvardeitsev, CEO of ITransion awarded “Man of Business” prize in the nomination «for establishing an enterprise showing an example of the transition to innovative track of development”. The “Man of Business” contest is held in Minsk annually with the purpose of revealing twelve most successful top-managers. The decision is based on the business activity of the enterprises that they head. This year’s contest
Comments about openPR
9 o'clock: discuss press release with client, 10 o'clock: submit release to openPR, within the briefest possible time release is published and displayed in a prominent place on openPR.de. I am thrilled!
Zehra Spindler, Calypso Now! - Communication Agency