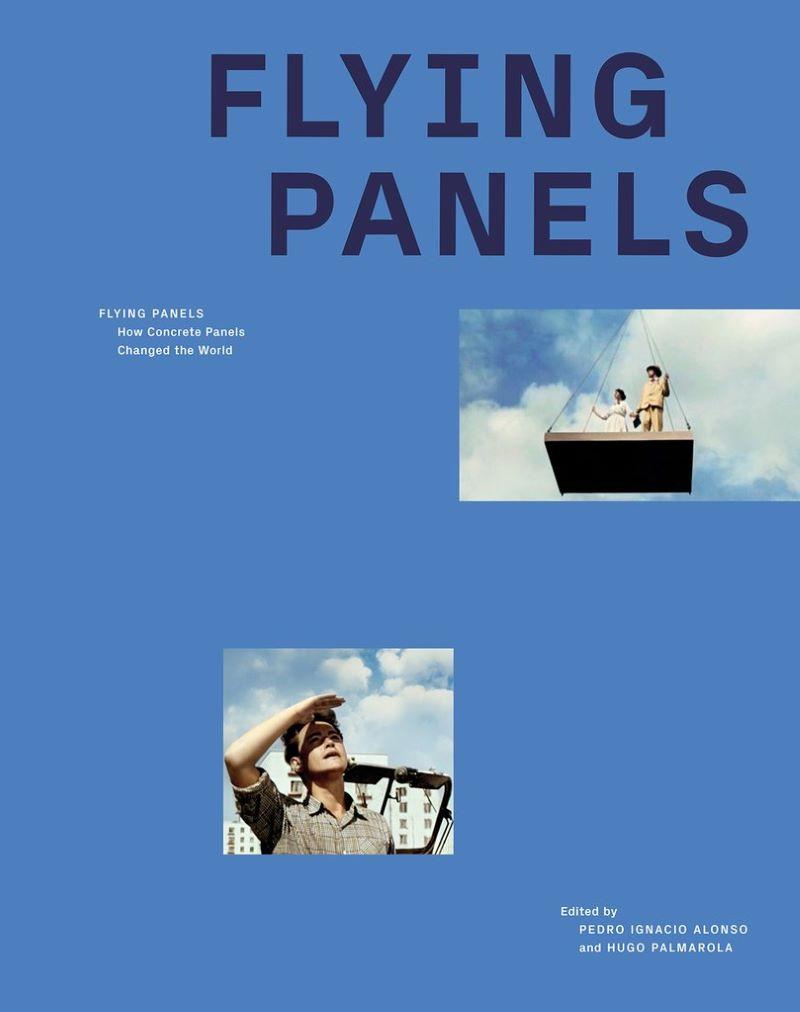 During the second half of the twentieth century countless concrete panels sailed through the skies: not only physically from factory to construction site, or from country to country, but also figuratively. The flying concrete panel could be found all over the world in countless pictures, on posters, in cartoons and movies and even as toys or theatre and opera sets. Their symbolism made them an emblem for the promise of a modern, better world.It was this phenomenon that induced Pedro Ignacio Alonso and Hugo Palmarola, the editors of Flying Panels. How Concrete Panels Changed the World, to compile a cultural history of the concrete panel from its beginnings to the present. In it, they look at how the prefabricated panel moved towards the centre of debate when it came to modernising and industrialisation processes in architecture and what visions and aspirations one had initially placed with them - until they achieved the notoriety of being the cause responsible for the monotony of today's cities and associated societal problems. Currently they are going through what one can almost see as a revival due to the many aesthetic and constructive possibilities that they offer. In the book architects, historians, philosophers and curators discuss the cultural influence that this method of construction has caused. By looking at media portrayal, the authors show how closely technology, society, politics and art are interwoven. The book therefore elucidates how industrial mass production evolved from manual labour, how the technologies of concrete panels rapidly spread and led to the creation of millions of square meters of housing in more than seventy countries. Not only did countless people have a roof over their heads within a relatively short period of time, but the new construction technology also became a powerful tool for the development of a new society. That this was not only the case in the USSR, but also in countries like the United States, China or Sweden, is illustrated in the wealth of material that the authors have gathered during their research work - which lasted for more than a decade - that is now present to the public. This publication accompanies the exhibition of the same name curated by Pedro Ignacio Alonso and Hugo Palmarola, which will run at ArkDes - The Swedish Centre for Architecture and Design in Stockholm from October 18, 2019 to March 1, 2020. With essays by Michael Abrahamson, Jimena Castillo, Adrian Forty, Boris Groys, Maria Lind, Jennifer Mack, Philipp Meuser, Natalya Solopova, Erik Stenberg, and Christine Varga-Harris.Pedro Ignacio Alonso/Hugo Palmarola (eds.) Flying Panels. How Concrete Panels Changed the World With essays by Michael Abrahamson, Jimena Castillo, Adrian Forty, Boris Groys, Maria Lind, Jennifer Mack, Philipp Meuser, Natalya Solopova, Erik Stenberg and Christine Varga-Harris 170 x 240 mm, 264 pages 300 pictures, Hardcover ISBN 978-3-86922-563-0 (English edition) EUR 38.00 / CHF 46.40 October 2019. DOM publishers, Berlingisela graf communications Gisela Graf Schillerstr. 20 D 79102 Freiburg T +49 761 791 99 09 F +49 761 791 99 08 contact@gisela-graf.com www.gisela-graf.comgisela graf communications supports publishers, museums and institutions specialising in architecture, design or art, with professional press and PR work, also on an international level. Communications -- Individual concepts and texts for media relations Connections -- Media contacts, interview arrangements, events -- anything that brings people and subjects together Corrections -- Editing and copy editing of texts and specialised publications, catalogues and brochures

You can edit or delete your press release Flying Panels. How Concrete Panels Changed the World here

03-09-2020 | Arts & Culture
gisela graf communications
Next to Bauhaus 2
The Bauhaus centenary might be over, but the Bauhaus tradition persists. This is clearly shown in the Dessau School of Architecture's new annual "Next to Bauhaus 2". The second volume of documentation on the research and teachings by the Faculty of Architecture, Facility Management and Spatial Information of the Anhalt University of Applied Sciences provides an overview of the work and legacy of lecturers and students of the Dessau campus
12-09-2019 | Arts & Culture
gisela graf communications
Mass Housing in the Socialist City. Heritage, Values, and Perspectives
Prefabricated mass housing in cities from formerly socialist countries represents an enormous volume of residential housing today and is therefore an important tool for the future urban development within these cities. But transformation of these districts is needed due to the functional, societal, and technical challenges that they face. How can these - sometimes gigantic - structures from the 1960s and 70s be adapted to today's needs? How can a
07-31-2019 | Arts & Culture
gisela graf communications
Architectural Guide Moon
Mankind first reached the moon on July 21, 1969. This celestial body had always been a place of longing for earth's inhabitants but this date really set things in motion. Luna, Ranger and Apollo - these and all of the other missions that followed contributed to the fact that we can now seriously consider settling on the moon - and in a manner that is quite different from the
07-29-2019 | Arts & Culture
gisela graf communications
Sports Facilities. Leisure and Movement in Urban Space
Gone are the days in which the typically multi-purpose school gyms located somewhere on the outskirts of town are the first thing to come to mind when one mentions sports facilities. Nowadays a growing number of sports facilities are developed which are not only designed with an unusual concept and integration into the urban context, but which also provide a significant and aesthetic contribution to their surroundings - all the