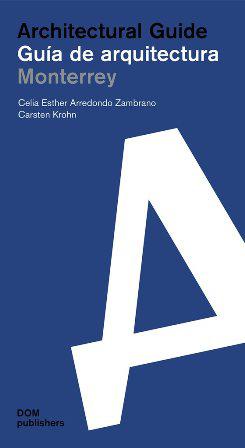 Monterrey is known as ‘the city of the mountains’, in reference to its privileged location at the foothills of the Sierra Madre. The city, founded in the north-east of Mexico in 1596, remained dormant until the turn of the 20th century, when it went through a period of rapid industrial growth that transformed it into a prosperous city. Today, Monterrey is an important metropolis brimming with culture, education, and business.In the Architectural Guide Monterrey, Celia Esther Arredondo Zambrano and Carsten Krohn explore how the city’s architecture contributed to this transformation. The city needed to accommodate a rapid population growth from one to four million residents, particularly in the last 50 years. Nonetheless, Monterrey is still considered to be among the cities in Mexico with the highest living standards.This volume is structured geographically and presents 100 buildings in the Monterrey‘s historic centre as well as a number of other districts in the city. It presents Monterrey’s colonial origins – ever present in the Barrio Antiguo – and the breweries and foundries that played a central role in the city’s industrialisation. The book also explores how the spirit of modernity is reflected in the works of several famous Mexican architects – such as Mario Pani, Enrique de la Mora, and Luis Barragán – and finally arrives at the rapid growth of residential, corporate, and commercial developments currently taking place, with designs by internationally renowned architects such as Nicholas Grimshaw, Tadao Ando, Norman Foster, Zaha Hadid, and Alejandro Aravena.This architectural guide is bilingual, featuring texts in both Spanish and English. It is the second architectural guide by DOM publishers on Mexico, following the publication of the guide on Mexico City. Further titles on Latin America include guides on Brazil, Caracas, Havanna (all in English) as well as Chile (German).Celia Esther Arredondo Zambrano ∕ Carsten Krohn Architectural Guide Monterrey 134 × 245 mm, 208 pages 240 pictures, softcover ISBN 978-3-86922-620-0. Spanish / English EUR 28,00 / CHF 34,80 July 2018. DOM publishers, BerlinThe Architectural Guides by DOM publishers are handy travel companions for readers interested in architecture and culture. Projects are carefully selected and researched to make each individual book a ready work of reference, while background information and attractive design inspire armchair travellers to imaginary journeys. In 2014, the series was awarded with the „Iconic Award“ by the German Design Council, and in 2016 with the „German Design Award Special“. Further information: www.dom-publishers.comgisela graf communications supports publishers, museums and institutions specialising in architecture, design or art, with professional press and PR work, also on an international level. Communications — Individual concepts and texts for media relations Connections — Media contacts, interview arrangements, events — anything that brings people and subjects together Corrections — Editing and copy editing of texts and specialised publications, catalogues and brochuresgisela graf communications Gisela Graf Schillerstr. 20 D 79102 Freiburg T +49 761 791 99 09 F +49 761 791 99 08 contact@gisela-graf.com www.gisela-graf.com