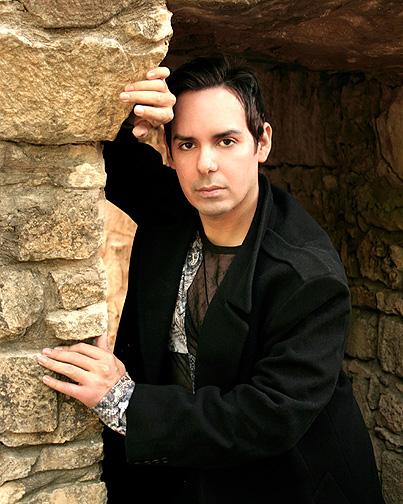 Comedian Jade Esteban Estrada has been called the "master entertainer" by the Richmond Times-Dispatch. He will speak in honor of Hispanic Heritage Month at MTV Networks September 17. Photo by FADELA CASTRO.

He has been featured on “The Graham Norton Effect” on Comedy Central. His music can be heard on “The Shield” on the FX Network. Other television appearances include “Friday Night Lights” on NBC and “In The Life” on PBS.

“Estrada is not an icon by accident,” raves Nicholas Snow of Notes from Hollywood. “You’ll laugh your butts off when Jade Esteban Estrada takes the stage,” warns Out Magazine. The Oklahoma Gazette calls him a “prominent and controversial gay Latin performer.” The Advocate calls him “the first gay Latin star.” The Bowling Green News calls him “one of today’s best solo performers.”

The former Charo choreographer and scratch vocalist for the Back Street Boys has been known for his highly acclaimed solo theatre shows including “Tortilla Heaven” and “ICONS: The Lesbian and Gay History of the World, Vol. 1.”

As a Latin pop singer, he lent his tenor voice to the Human Right Campaign's "Being Out Rocks" CD compilation in 2002.