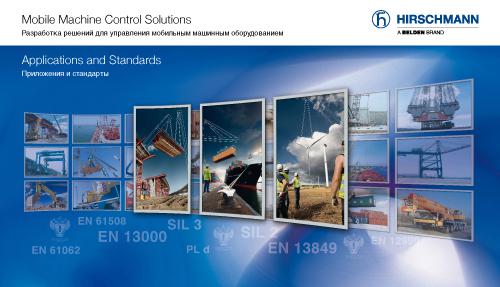 Hirschmann Mobile Machine Control Solutions (MCS), a vendor of future-proof, reliable mobile applicaitons, will exhibit for the first time with its own booth at CTT Moscow from May 20 to June 2, 2012, the leading trade show for the construction machine industry in Russia and Eastern Europe. Among other things, Hirschmann MCS now boasts certification from the Russian government agency ROSTECHNADSOR for use of the qSCALE system in Russian boom-type cranes!At the 13th CTT, Hirschmann MCS will be an important exhibitor at the “Crocus Expo” International Exhibition Center, which representatives of manufacturers, retailers, and service providers in the construction and building materials sectors will be visiting to learn about innovative construction machines and technologies. At the Hirschmann MCS booth in the German Pavilion (Hall 6/6-716), decision-makers, engineers, and technicians from all over the world (the 2011 show attracted 28,269 of them) can witness first-hand a demonstration of the iSCALE Control System, an automation platform that is geared to meeting future needs. Hirschmann MCS will show high-end safety load indication on its large vSCALE D3 console. And on the smaller vSCALE D2 console, the company will demonstrate how easy it is to program the entire control system with the aid of its own Codesys ® module library.In addition, Hirschmann MCS will exhibit its standard fSENS KMD and fSENS DKA sensor products, as well as a system for wireless transmission of measurement data.The last show in 2011 counted 790 exhibitors from 27 countries, and the total exhibition space climbed to 73,800 square meters. New records are also expected to be set in 2012. The reason for all this interest is the enormous potential of the Russian market – especially for Western manufacturers. Hirschmann MCS already enjoys an excellent reputation in Russia, which it has earned with leading-edge products that are absolutely convincing with regard to their compliance with safety requirements and their suitability for use in rough environments. At CTT 2012, Hirschmann MCS delivers proof positive that it totally deserves its image as a dependable and innovative partner to Russian companies. See you in Moscow!Company Profile:Hirschmann Mobile Machine Control Solutions (MCS) is a business unit of Hirschmann Automation and Control GmbH, a company of the U.S.-based Belden Inc. Group. Hirschmann MCS is the world market leader in safe load indication systems for telescopic and lattice-boom cranes and the system provider of innovative mobile automation platforms for all applications involving rough environmental conditions. The company is setting new standards in meeting safety requirements and in the product categories of sensors, controllers, consoles, and software for mobile machines and applications – across all industries. Hirschmann MCS produces and sells product and system solutions for manufacturers of mobile machines and equpiment. It has 130 employees in Ettlingen, Germany and another 20 in Chambersburg, Pennsylvania (in the United States), and 300 staff work at a joint venture in Xuzhou, China and a sales office in Shanghai.Contact:Nicole Krupp-Sieber Hirschmann Automation and Control GmbH Hirschmann Mobile Machine Control Solutions Hertzstrasse 32 - 34 76275 Ettlingen GermanyPhone: +49 (0)7243 709-3101 Fax:    +49 (0)7243 709-3129 e-Mail: Nicole.Krupp-Sieber@belden.com www.beldensolutions.com

You can edit or delete your press release Hirschmann MCS: A Major Partner in Russia here