A Strong Partner to the Russian Construction Machine Industry 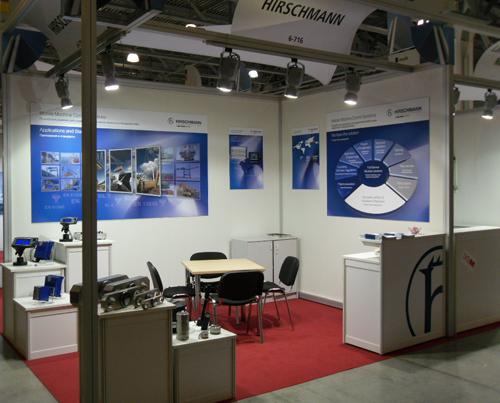 For the first time, Hirschmann MCS had its own booth at CTT.

At the CTT in Moscow, Hirschmann Mobile Machine Control Solutions (MCS) successfully positioned itself as a reliable partner to Russian manufacturers of construction machinery. Thanks to the approval of the qSCALE system for Russian boom-type cranes, the company made many promising new contacts.For the first time, Hirschmann MCS had its own booth at the CTT show in Moscow from May 29 to June 2, exhibiting alongside industry giants such as XCMG, Zoomlion, Liebherr, Terex, Link-Belt, and Altec of the United States and Hidrokon of Turkey. This allowed Hirschmann MCS to give greater weight to its commitment to serving the Russian crane market.Because the state authority ROSTECHNADSOR had approved the qSCALE System for use in Russian boom-type cranes, Hirschmann MCS has been able to enter into ongoing and highly promising partnerships with many customers. Both existing and prospective business partners were especially impressed by the company’s innovativeness, which it demonstrated with its iSCALE Control System automation platform.Hirschmann MCS sees great potential for its solutions in the steadily growing Russian market. The demand on the part of Russian construction machine producers for both existing products and further innovative solutions from Hirschmann MCS is increasing.Company Profile:Hirschmann Mobile Machine Control Solutions (MCS) is a business unit of Hirschmann Automation and Control GmbH, a company of the U.S.-based Belden Inc. Group. Hirschmann MCS is the world market leader in safe load indication systems for telescopic and lattice-boom cranes and the system provider of innovative mobile automation platforms for all applications involving rough environmental conditions. The company is setting new standards in meeting safety requirements and in the product categories of sensors, controllers, consoles, and software for mobile machines and applications – across all industries. Hirschmann MCS produces and sells product and system solutions for manufacturers of mobile machines and equpiment. It has 130 employees in Ettlingen, Germany and another 20 in Chambersburg, Pennsylvania (in the United States), and 300 staff work at a joint venture in Xuzhou, China and a sales office in Shanghai.Contact:Nicole Krupp-Sieber Hirschmann Automation and Control GmbH Hirschmann Mobile Machine Control Solutions Hertzstrasse 32 - 34 76275 Ettlingen GermanyPhone: +49 (0)7243 709-3101 Fax:    +49 (0)7243 709-3129 e-Mail: Nicole.Krupp-Sieber@belden.com www.beldensolutions.com