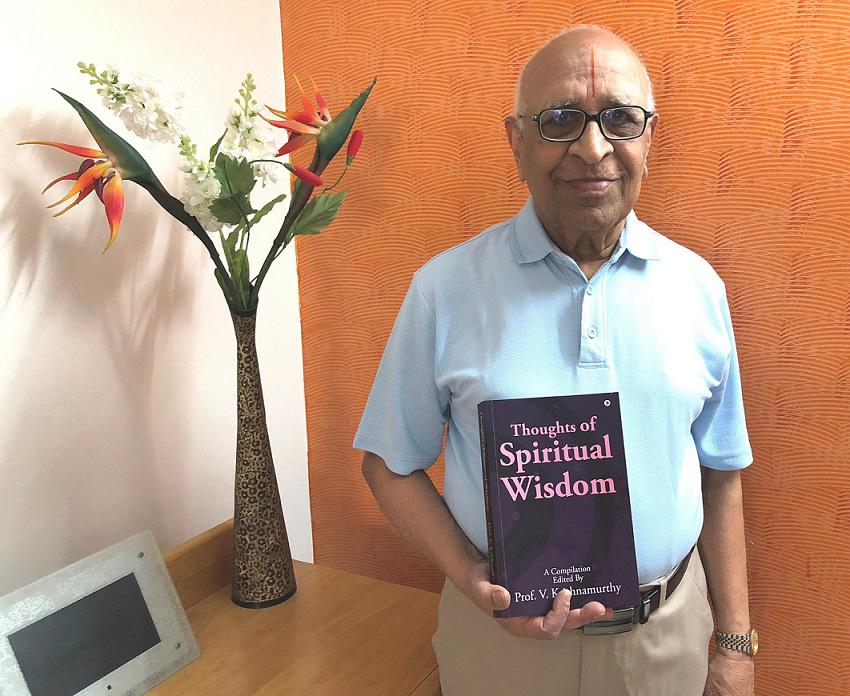 One who opens any page of this book of 365 Thoughts of Spiritual Wisdom is bound to drift into a cornucopia of various voices from towering scholars of spirituality across the globe speaking from personal experience.It is known that Information is just bits of data while knowledge is putting them together and wisdom is transcending them. When Prof Krishnamurthy puts it together and transcends, then it becomes very special. Prof. V. Krishnamurthy (born 1927) M.A. of Madras University and Ph.D, of Annamalai University, is an ex-Director of K.K. Birla Academy, New Delhi. Formerly he was Dy. Director and Prof. of Mathematics at Birla Institute of Technology and Science, Pilani for more than two decades. His teaching prowess and administrative acumen are folklore at Birla Institute of Technology and Science - BITS Pilani alumni “Proud to be BITSians”s spread across all latitudes longitudes and altitudes. He has authored a number of books and research papers in the areas of Linear Algebra, Functional Analysis and Combinatorial Mathematics which has won international recognition. Prof Krishnamurthy was also trained systematically in the traditional Hindu scriptures by his father Sri R. Viswanatha Sastrigal, a scholarly exponent who was himself a living example of the ideal Hindu way of life. Over the years Prof. Krishnamurthy has given several successful lectures on Hinduism, the Ramayana, the Bhagavad Gita, the Upanishads, and Srimad Bhagavatam to Indian and American audiences. His expositions have been acclaimed for their precision, clarity and an irresistible appeal to the modern mind.The purpose of this compilation “Thoughts of Spiritual Wisdom” is to spread spiritually oriented thinking across the world among those who have a basic urge to rise beyond the mundane. The main pattern of the book is the variety of its compilation by which it opens out windows to a spiritual panorama. Each page may trigger a new train of thought, the source of which is right on the same page. To put it mathematically, most of the thought-quotations indeed have a gradient for steepest ascent with optimum step size towards a Hindu environment. The origin of the book goes back to the compiler’s practice in 2017 to post one such thought on his Facebook page daily during the year. No title was posted for any of the thoughts except to serially number and date them. Readers were invited to suggest a heading or title for each of the thoughts as they appeared daily and that was how the heading on each page of the book was evolved. A look at these titles of the thoughts and the list of their author-sources will itself be an eye-opener into the extensive mansion of spirituality. The uniqueness of this book is that it is indeed an outcome of crowdsourcing of thoughts, opinions, arguments, counter views by scholars across the world on social media giant Facebook.The book has been published by Notion Press Media Pvt Ltd Old No.38, New No.6, McNichols Road, Chetpet, Chennai 600 031 Phone +91 9840474398. To get a copy of the book “Thoughts of Spiritual Wisdom authored by Prof V Krishnamurthy at a very special 20% discount, use coupon code ADVAITABHAKTI by clicking the link https://notionpress.com/read/thoughts-of-spiritual-wisdomThose who want to get the book “Thoughts of Spiritual Wisdom authored by Prof V Krishnamurthy at the discount of 20% through Amazon, may email to him at profvk@yahoo.com to get a special coupon code. His other books on religion include Essentials of Hinduism (1989); Hinduism for the Next Generation (1992); The Ten Commandments of Hinduism (1994); Science and Spirituality: A Vedanta Perception (2002); Kannan sorppaDi vaazhva-deppaDi (2002) (In Tamil, with an appendix on Dhruva-Stuti - An Upanishad Capsule); and Live Happily the Gita Way (2008); Gems from the Ocean of Spiritual Hindu Thought and Gems from the Ocean of Devotional Hindu Thought (2010).For more details about Prof V Krishnamurthy see http://www.advaita.org.uk/discourses/profvk/profvk.htmAbout BITSAA: BITS Alumni Association (BITSAA) has emerged as one of the strongest alumni networks of any university. BITSAA International engages in charitable and educational activities by raising funds for setting up endowments, creating scholarships, rewarding teaching and research and generally promoting the development of resources at Birla Institute of Technology and Science at Pilani, Dubai, Goa & Hyderabad campuses. BITSAA International also aims to strengthen the ties, friendship and communication amongst former students, alumni faculty and friends of the Institute. BITSAA International provides a number of channels for people to stay connected with each other and with Birla Institute of Technology & Science. Notable other alumni initiatives for BITS Pilani include Guru Dakshina program by 70-75 batch to honour former faculty members, Prof Venkateswaran Faculty Excellence award by Karthik Krishna, Prof SSR Memorial Teaching Excellence Award, Atma Nirbara multi crore Pilani Resource Centre by 75-80 batch alumni and many more. For more on BITSAA see https://www.bitsaa.org/Prof BR Natarajan BITS Pilani Alumnus Pilani Rajasthan India 333031 Phone: +91-9799476406 Email: brnatarajan@bitsaa.org Website: https://www.bitsaa.org/

11-13-2021 | Health & Medicine
Drluisgavin.com
Ear Ringing How to Treat by Prof. Dr. Luis Gavin
By Prof. Dr. Luis Gavin, King’s College and Gargash Hospital in Dubai Professor Dr. Luis Gavin – a leading international Speaker, Maxillofacial Surgeon from Spain, Specialist in ear ringing and tinnitus, dealing with hundreds of patients each year. Ear ringing is the perception of noise or ringing in the ears. It can cause hearing loss, loudness, discomfort and imbalance. Sadly, many cases often go untreated or are misdiagnosed as Meniere's disease, vertigo,
10-19-2021 | Health & Medicine
Drluisgavin.com
Face lifting Without Surgery By Prof. Dr. Luis Gavin
Face lifting Without Surgery By Prof. Dr. Luis Gavin, a leading international Speaker, Maxillofacial Surgery Consultant – and Ozone Therapist Works at King’s College Hospital, a leading hospital in Dubai. How Is it Performed? The thread lift procedure can be performed under local anesthesia and only takes 1 to 2 hours. The surgeon inserts tiny threads, bio absorbable sutures, under the skin of the face. The sutures attach to skin tissue and
04-14-2020 | Arts & Culture
Al-Khalifa Business School
Prof. Igor Eleferenko appointed Dean of Al-Khalifa Business School
H.E. Prof. Sir Igor Eleferenko Ph.D. (Russian Federation) has been elected on 6th April 2020 as the Dean of Al-Khalifa Business School. Born on 23rd May 1958, in Moscow; in 1980 he graduated from Moscow State Pedagogical Institute named after M. Teresa. He has more than 40 years of experience as Associate Editor, Editor, Deputy Head of the APN Bureau in Havana, Deputy Editor-in-Chief, Editor-in-Chief of AVID APN, Editor-in-chief of TRK "TV-News"
01-31-2020 | Business, Economy, Finances, B …
INDIAN INSTITUTE OF FINANCE
Union Budget 2020-21 : Forecasts by Prof. Yamini Agarwal
Fiscal Deficit in the Budget to be presented on 1st February, 2020 is likely to be 3.34% depending upon the growth targets fixed by the Finance Minister said Prof. (Dr.) Yamini Agarwal, Professor of Finance and Dean (Research), Indian Institute of Finance while making a presentation on "My Budget" for the programme - Mera Budget on Rajya Sabha TV recently. According to her, the major issues in the present budget are
04-20-2019 | Science & Education
Banasthali
Banasthali Celebrates 87th Birthday of Dada Prof Diwakar Shastri
By nurturing Banasthali which is today one among the most sought after and top ranking women’s universities in India with global ranking, Prof Diwakar Shastri known to one and all as “Dada” built capacities for the spirit of inquiry, creativity and moral leadership among the enrolled girl students and became their role models. Known for his dignified unassuming personality, gleaming intellect, meticulous planning, deep regard for punctuality, far reaching vision and
09-18-2017 | Science & Education
Banasthali
Prof Joy Mukhopadhyay Talks on Colour Science & Technology at Banasthali
One field which combines Chemistry, Physics, Physiology and Psychology is undoubtedly Colour Science and Technology. Global market size of dyes and pigments is of the order of USD 27.8 Billion with India market size of USD 4.9 Billion. Specialty chemicals, which comprise low volume, high value chemicals with specific applications, constitute a significant part of the Indian chemical industry include agrochemicals, flavors and fragrances, surfactants, polymer additives, personal care ingredients,
Comments about openPR
I can't but agree to the positive statements about your portal: easy to use, clear layout, very good search function, and quick editing!
Jens O'Brien, Borgmeier Media Communication