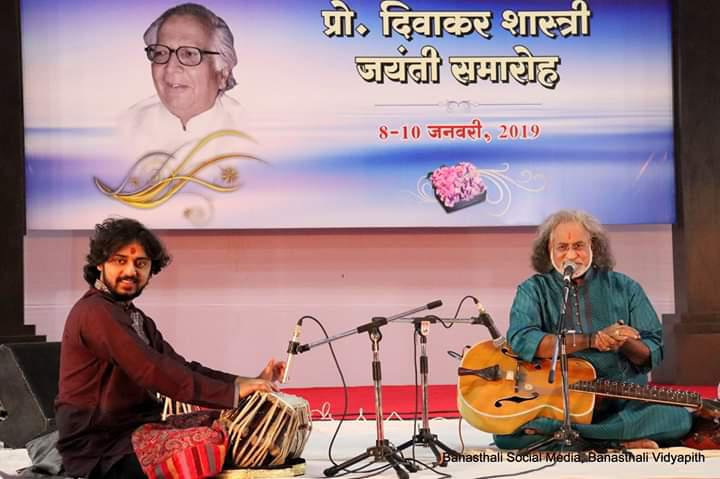 By nurturing Banasthali which is today one among the most sought after and top ranking women’s universities in India with global ranking, Prof Diwakar Shastri known to one and all as “Dada” built capacities for the spirit of inquiry, creativity and moral leadership among the enrolled girl students and became their role models.Known for his dignified unassuming personality, gleaming intellect, meticulous planning, deep regard for punctuality, far reaching vision and dynamic leadership, Dada indeed made an indelible mark in the field of education and women empowerment at Banasthali.Born on 09 Jan 1932, Prof Diwakar Shastri completed his education from Delhi School of Economics and played a stellar role in shaping the finances of Banasthali, introduced several new courses and championed the cause of wearing Khadi by everyone in the campus. To mark his 87th birthday, Banasthali organized a three day celebrations during 8-10 Jan 2019. The celebrations started on 08 Jan 209 with industry doyen Sri Mridu Hari Dalmia’s talk on Nirog Banasthali which was attended by all faculty and thousands of students. He emphasized on good practices of exercise and eating habits to keep healthy. The evening of same day had a mesmerizing Mohan Veena performance by Grammy Award winning Pandit Vishwa Mohan Bhatt for whom music is the medium to talk to God.On 09 Jan 2019, the new class rooms of Sharda Mandir and the Innovation Hub to trigger unusual ideas by nexgen students were inaugurated by Vice Chancellor Prof Aditya Shastri and other dignitaries. The day also had a special broadcast dedicated to Dadaji by FM Radio Banasthali. Team Banasthali which bagged top ranking honours at National Youth Festival had Victory Rally across the campus followed by a grand felicitation ceremony for each one of the medal winners. The last day 10 Jan 2019 had inauguration of state of the art indoor sports stadium and the celebrations ended with an unforgettable music program at Sur Mandir auditorium by Pandit Parimal Chakravorty renowned Tabla player and Pandit Kewalya Kumar Gaurav of Kirana Gharana.The students and faculty who attended Dadaji Birthday Celebrations left with beaming faces and pride that they were indeed part of an institution which is a jewel in the crown among the women’s universities not only in India today but across the globe.For more details about Banasthali see http://www.banasthali.org/About Banasthali: Established in 1935, the Institution which is also the largest fully residential women’s university in the world has played a big role in revolutionizing women’s education and empowerment in India for the last eight decades. Banasthali has scripted numerous success stories in a wide range of fields, and stands tall among the citadels of learning in India today. Proud to be Banasthali alumni who call themselves as Banasthalites can be found in all latitudes, longitudes and altitudes in all walks of life across the globe. Banasthali has the pride of being chosen as a Faculty Development Centre under the MHRD Govt of India Pandit Madan Mohan Malaviya National Mission on Teachers and Teaching (PMMMNMTT) as well as for hosting Atal Incubation Centre (AIC) by NITI Aayog Apart from various National Rankings which include India Today #2, FICCI University of the year 2015, NAAC A grade, MHRD NIRF 29, in recent past, Banasthali has been in national and international media attention for getting Quacquarelli Symonds QS Asia University Ranking, QS BRICS Ranking, Diamond status under QS i-Gauge Indian University Rating and the overall Four Star Ranking in - QS Stars Rated for Excellence with 5 Stars for each for Teaching, Employability, Facilities, Arts & Culture and Inclusiveness.Banasthali Vidyapith Banasthali Rajasthan – 304022 Phone 91 1438 228456 / 228341 Email: info@banasthali.ac.in Website: http://www.banasthali.org Facebook: www.facebook.com/Banasthali.org

06-01-2022 | Advertising, Media Consulting, …
AMA Research & Media LLP
Instant Delivery Market to Eyewitness Massive Growth by 2028 | Walmart, Zomato, …
Latest published market study on Global Instant Delivery Market provides an overview of the current market dynamics in the Instant Delivery space, as well as what our survey respondents-all outsourcing decision-makers-predict the market will look like in 2027. The study breaks market by revenue and volume (wherever applicable) and price history to estimates size and trend analysis and identifying gaps and opportunities. Some of the players that are in coverage
04-13-2022 | Health & Medicine
Absolute Markets Insights
Veterinary Pharmacovigilance Market Giants Spending Is Going to Boom With DADA, …
The recent report titled as Global Veterinary Pharmacovigilance Market published by Absolute Markets Insights is a focused study encompassing the market segmentation primarily based on type and application. The report investigates the key drivers leading to the growth of the Veterinary Pharmacovigilance market during the forecast period and analyzes the factors that may hinder the market growth in the future. Besides, the report highlights the potential opportunities for the market
12-16-2021 | Associations & Organizations
Dada Bhagwan Foundation
The In-person Self-realization Ceremony Hailed the 114th Birthday Fete of Param …
The Dada Bhagwan Foundation (DBF), an esteemed spiritual organization, celebrated the 114th birthday of the Akram spiritual scientist, Param Pujya Dada Bhagwan after a long wait of two years for in-person commemoration. Of all the event highlights, the Self-realization ceremony seemed to be the most spiritually uplifting one. ADALAJ, GUJARAT, INDIA: The 114th birthday of Late Shree Ambalal Muljibhai Patel, fondly known as Param Pujya Dada Bhagwan or the Gnani Purush,
11-10-2020 | IT, New Media & Software
Market Research Inc.
ASTONISHING DRIVERS OF ONLINE ENGLISH LEARNING PLATFORM MARKET SCOPE WITH UPCOMI …
Market Research Inc proclaims the obtainability of a new statistical data to its repository titled as, Online English Learning Platform market. It covers the wide-ranging aspects of the businesses such as pillars, features, sales strategies, planning models to get better insights for the businesses. Furthermore, it throws light on recent developments and technological platforms, several tools, and methodologies that help to boost the performance of industries. The rise in the
08-20-2020 | IT, New Media & Software
Orian Research
Instant Delivery Market Next Big Thing | Major Giants: Alibaba,DaDa,JD,Meituan,S …
Global Instant Delivery Market" Research Report 2020 provides an in-depth analysis of the Instant Delivery Market with the forecast of market size and growth. The analysis includes addressable market, market by volume, market share by business type and by segment .The research study examines the Instant Delivery Market on the basis of a number of criteria, such as the product type, application, and its geographical presence. Get Sample Copy of this
08-08-2020 | Advertising, Media Consulting, …
Market Insights Reports
Instant Delivery Market 2020 Business Scenario –Alibaba, DaDa, JD, Meituan
Global Instant Delivery Market Size, Status and Forecast 2020-2026 The report presents an in-depth assessment of the Instant Delivery Market including enabling technologies, key trends, market drivers, challenges, standardization, regulatory landscape, deployment models, operator case studies, opportunities, future roadmap, value chain, ecosystem player profiles, and strategies. The report also presents SWOT Analysis and forecast for Instant Delivery investments from 2020 till 2026. Inquire for Sample Copy of this Report: https://www.marketinsightsreports.com/reports/08062204257/global-instant-delivery-market-size-status-and-forecast-2020-2026/inquiry?Mode=70 Key Market Players: Alibaba,
Comments about openPR
OpenPR ist the nicest and most clearly laid out PR platform I have seen to this day. The press releases are displayed very nicely and clearly and without any unnecessary frills. The updates are fast and the finished release looks appealing and is clearly legible. Even with 16 years of experience one discovers new things from time to time. Congratulations!
Gabriele Ketterl, Director Marketing & PR, Menads