International Masterclasses for Directors and Trainers 2009-10 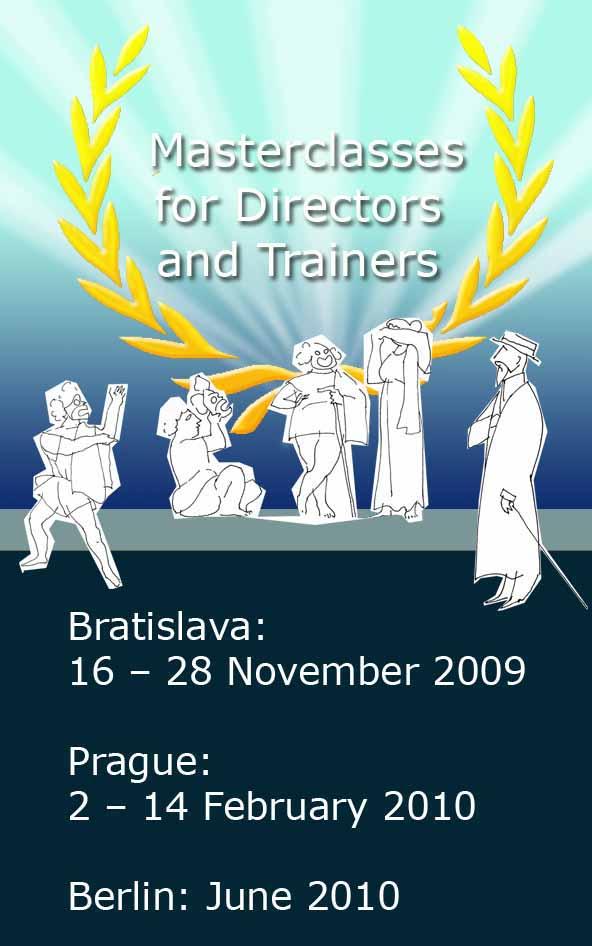 The Art of Dialogue an intercultural theatre research project (2008 – 2010)artistic director: Prof. Dr. Jurij AlschitzThe year of intercultural dialogue 2008 invited us to give a thought on the very nature of the Dialogue itself – to look at its different forms and various meanings.The Art of Dialogue is an inter-cultural theatre research project with work¬shops, master classes, colloquia, laboratories, and performances. Research, teaching and production form one insepa¬rable unity. EATC initiated a collaboration of 15 organisations from 11 European countries, who will look at ONE theme from different points of view, under different aspects by using various forms of realisation. In this frame EATC offers Academies, Teachers and Directors to participate in theInternational Masterclasses for Directors and Trainers 2009-10The Line “Train the Trainers” mediates new teaching and rehearsal methods. It is a theatre research in dialog with directors and teachers, which leads to a long-term further develop¬ment of the subject, which can directly be applied in the collaborating institutions.Three masterclasses will cover three themes, which build upon each other – how to lead and how to teach the Art of Dialog:I. The training for dialogue The themes for the lectures and discussions are: What does it mean Dialogue? Dialogue for the ears? Dialogue for the eyes? Dialogue for the brain? Dialogue for the heart? What makes the different between a conversation and the dramatic dialogue? In which relationship are dialogue and dispute? What is the nature of the dialogue in silence? We want to look at the landscape for dialogue, and the Humane in the field of dialogue. Practically we will look at the general technique, of the strategy of the dialogue: defense, attack, initiative, lie, paradox etc. Training and exercises for the education of the actor in the art of dialogue.II. Different kind of the dialogue and ways of analysis Looking at the history of theatre – the main principles of dialogue vary for the different kinds of dialogue and periods of theatre: the pure dialogue (exchange between two individuals to open knowledge)the dialogue of I + I (2 monologues exchanging replica) the dialogue of the “upper I”(2 positions for one unknown truth; Plato) the dialogue of agreement (the way to find agreement through the labyrinth; Molière, Shakespeare) the dialogue as duel (fencing with words; Oscar Wilde) the dialogue of gentlemen (the other position comes first) the dialogue of the deaf (Chekhov, Pinter, Beckett) The main material for practice in this course could be Plato: Ion and Pinter: LandscapeIII. The rehearsal practice. Dialogue between director and actor The Art of Rehearsal of the dialog will put the different types discussed in ModuleII into practice. Rehearsing itself will be looked at as a form of dialogue between the director and actors The main material for practice in this course will be Chekhov: Three Sisters, and Pushkin: Mozart and Salieri.The Masterclasses (each 2 weeks, full-time) will be held at three academies: 1. VSMU - Academy of Music and Dramatic Art Bratislava, 16 – 28 November 20092. DAMU – Academy for Performing Arts Prag, 2 – 14 February 20103. AKT-ZENT - research centre of iti/unesco theatre training committee Berlin – June 2010The participants will be selected by their academies for the whole line. In the time between the sessions, they have already the possibility to try out and experiment in their daily practice, coming back with results of their research and with enough new questions.All results of the masterclasses and laboratories will be published in a handbook for actors, directors, and teachers.programme director : Christine SchmalorEuropean Association for Theatre CultureThe European Association for Theatre Culture (EATC) links together the international theatre centres AKT-ZENT (Germany), KOINE (France), PROTEI (Italy), and SCUT (Scandinavia). It was founded in 1995, under the artistic direction of Jurij Alschitz, to provide a framework for continuous learning, experiment, and research. In 2006, AKT-ZENT was designated Research Centre of the Theatre Education & Training Committee ITI/UNESCO (International Theatre Institute). The EATC is an unusual network - namely a network of ideas - with the shared objective of acquiring, accumulating, and disseminating knowledge and theatre expertise. Over the last years the “Team Teaching” model that has been developed is unique in Europe. Thanks to the European ensemble of teachers, EATC can teach a self-enclosed pedagogic system in a fully multi-lingual environment; thus putting the theoretical quest for a European theatrical language into real practice specifically bringing together Russian and various western European theatre cultures. In various European countries master classes and seminars are held with the objective of exploring and imparting methodological principles. This learning process develops into research work on specific themes and laboratories where actors and pedagogues are free to experiment in peace. This research work in turn develops into performances, publications, and work modules to bring new insight into acting methods. With ARS INCOGNITA, the association has its own series of publications, printing teaching and research results.Christine Schmalorpress release :Christijan LaljakAKT-ZENT e.V. Internationales Theaterzentrum Berlin research centre of iti/unesco theatre training committee Künstlerische Leitung: Dr. Jurij Alschitz Skalitzerstr. 97, D-10997 Berlin, T/F +49 - 30 – 612 87 274 e-mail: akt.zent@berlin.de www.theatreculture.org

10-24-2008 | Arts & Culture
AKT-ZENT, International Theatre Center
THE ART OF REHERSAL and THE ART OF TRAINING
A seminar in two parts for directors, acting teachers, pedagogues and actors is taking place from 15. January - 3. February 2009 in the rooms of AKT-ZENT, International Theatre Center, at Berlin. Artistic director is Prof. Dr. Jurij Alschitz. The first part - The Art of Analysis - is from 15. - 23. January and the second part - The Art of Rehersal - is from 26. January to 3.

05-03-2017 | Business, Economy, Finances, B …
JSC "Investment Projects Fund"
Constructive dialogue of the regional authorities and business community
The meeting of the council for improvement of the investment climate and to assistance of development of the competition in the Lipetsk region was held by the deputy head of the region Andrey Kozoderov last week. The head of representative office of the autonomous nonprofit organization "Agency of Strategic Initiatives on Promotion of New Projects" Dmitry Abramov took part in work in the CFD. Implementation of orders of the President of
07-08-2010 | IT, New Media & Software
artegic AG
ELAINE FIVE makes industrial enterprises ready for online dialogue marketing
eCRM solution supports SAP-based service processes Bonn, July 8th 2010 - artegic’s new ELAINE FIVE Online Dialogue CRM offers industrial enterprises with centralised SAP infrastructures a compatible interface with this new version of eCRM software. By linking SAP R/3 and SAP XI, bi-directional data transfer will become possible, e. g. from profile or transaction data. artegic has thus created a vital platform to efficiently build and expand online dialogue marketing
03-02-2010 | IT, New Media & Software
Portrait Software
PORTRAIT SOFTWARE UNVEILS PORTRAIT DIALOGUE 5
Boston, MA - February 25, 2010 – Portrait Software, a leading provider of customer interaction software, today announced the early availability of Portrait Dialogue 5. Formerly known as Portrait Campaign Manager, the significantly enhanced solution converts disparate campaigns and customer interactions into an engaging two-way dialogue to improve customer retention, reduce customer opt-out, and increase lifetime value. Portrait Dialogue 5 will help marketing and CRM departments improve the
09-18-2009 | Business, Economy, Finances, B …
econique summits GmbH & Co. KG
CxO Dialogue in Frankfurt: Leading banks discuss risk, market and IT strategies
The international executive network econique organises the European CxO Dialogue Banking Strategy in Frankfurt on the 28th / 29th October 2009. This executive summit brings together management players as well as solution providers to share their views and analyse current issues on risk management, compliance, IT and CRM. The CxO Dialogue provides an opportunity to network with executives of leading banks from all around Europe. Speakers from the European Central
07-13-2009 | IT, New Media & Software
artegic AG
A.T.U strengthens customer dialogue via email
artegic provides ECRM for Europe’s leading automotive workshop chain. Auto-Teile-Unger (A.T.U) looks forward to integrated ECRM. With the help of the ELAINE Online Dialogue Marketing Solution provided by ECRM specialist artegic (artegic.net) , A.T.U is fully integrating email marketing in its customer relation management. Main focus is the management of A.T.U loyalty card holders, as well as the distribution and service communication for its online shop. Online dialogue marketing is a fundamental
02-06-2008 | Politics, Law & Society
Civilisations Matter - Academy for Intercultural Dialogue gGmbH
Academy for Intercultural Dialogue has established a new platform
(CM, Berlin, 2008-02-06) The Academy for Intercultural Dialogue, founded December 2007 in Berlin, has established a new platform: cm-germany.org . Beyond the political scene and exempt from economic incitement, the Academy is designated to provide a forum of dialogue between groups of different political, religious and ethnical backgrounds. With its name 'Civilisations Matter', underlining the need of an interdisciplinary and intercultural discussion, this academy is bound to be an international site of
Comments about openPR
Your portal is fast, simple, and easy to use. Others may have more functions but they also demand more editing time, you have to preformat the text in order to achieve a good result etc. I think openPR is really fantastic!
Andreas Knepper, wallmedien AG