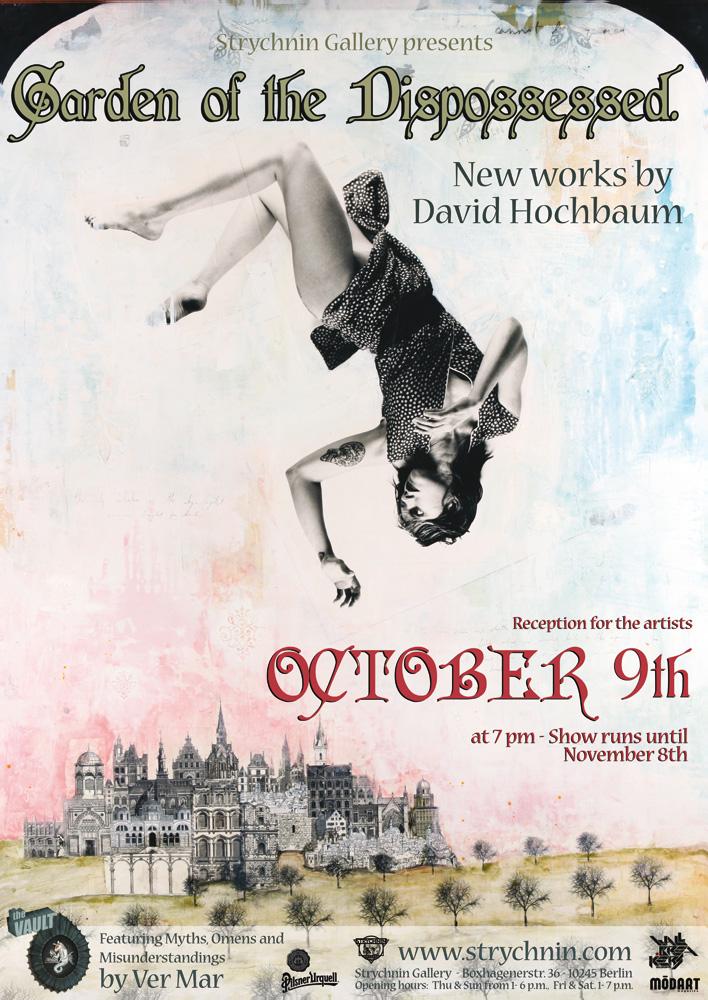 The invitation card to the latest exhibition by David Hochbaum. Artist Ver Mar will be showing works in "The Vault", Strychnin's second exhibition room.

Also featuring Myths, Omens and Misunderstandings - Ver Mar in The Vault. Reception for the artists October 9th at 7 p.m. After his last solo show at Strychnin Gallery Berlin in November 2008, American artist David Hochbaum returns with new works – this time going back to his roots in the darkroom. Presenting mixed media works based on black and white photographs, Hochbaum’s preoccupation with houses, labyrinthine streets and cityscapes reaches a new level of perfection in these carefully layered works. Ver Mar, whose sculptures of oceanic mythological creatures have already been seen in a few group shows at Strychnin Gallery, is showing a full-blown installation in Europe for the first time in The Vault, Strychnin’s exhibition room reserved for special occasions. The latest works by North American artist David Hochbaum are inspired by the city, most of all New York City, where he was born and has now been living and working for the past 14 years. The work gives testimony to the time spent and dues paid to a cut throat and unforgiving environment. The many tableaus in Hochbaum's latest series of works contain several complex layers of materials. The artist creates claustrophobic cities, flaunting the grandiose expression of man’s desire to achieve and progress beyond the heavens, cutting into the sky, obstructing the clear horizons. He has also created contradicting images of trees and forests, which come across more as figurative studies of people rather than timber. The city landscapes also take on an almost human quality although one does not see a single person inside them, unless looming over the buildings like giants, completely out of proportion to the cities' scale. In contrast to the images presenting outer cityscapes, Hochbaum then seems to zoom inside to show a more tranquil interior. He presents singular portraits of the possible inhabitants of the towns, sleeping in the grass, contemplating on the riverside, or traversing through the gardens. The quality of these works is more related to photography and maintains more integrity to the medium of the black and white silver print than to painting. But not unlike most of Hochbaum’s body of work, the materials are slashed, varnished and written upon, adding texture and the evidence of life to the surface. American artist Ver Mar is fascinated by the cinema of Tim Burton, Jan Svankmajer, and Jim Henson among others. The concept of stop action films and period pieces where elaborate production design involving lavish costumes, make up and sets are her inspiration. Her sculptures are monuments to sea-creatures and half-human, half-animal crossbreeds, portraits of the secret dream rulers of this world. Her latest show in Strychnin Gallery Berlin's special showroom called The Vault is inspired by mankind's desire before the age of science to understand nature and themselves by coming up with imaginative explanations, creating myths, legends and symbolism in the process that define all of our cultures until today. The contradictions resulting from changing interpretations of these symbols are fascinating to the artist, whose work is especially influenced by Chinese and European symbolism and mythology. Garden Of The Dispossessed - New Mixed Media works by David Hochbaum Myths, Omens and Misunderstandings - Ver Mar in The Vault. Opens October 9th 2009 - Runs until November 8th 2009 Opening hours: Thu & Sun from 1- 6 p.m., Fri & Sat. 1- 7 p.m. With galleries in three bustling hotspots – New York City, Berlin, and London – Strychnin Gallery is a playground for artists from all around the globe. It is a place where collaboration is encouraged, new projects are constantly developed and creativity is the one and only thing that truly counts. Owned by charismatic curator Yasha Young, Strychnin is dedicated to presenting emerging American artists to the European art world and vice versa. It features a variety of artists with particular individual styles rather than artists belonging to a collective “hip” movement. If you insist on putting a label on them, try lowbrow turned highbrow, pop surrealism or fantastic realism among others. The gallery participates in major international art fairs on a regular basis, including Bridge Art Fair, Liste, or Art Fair 21 in Cologne, which appointed gallery owner Yasha Young to its selection committee in 2008. Strychnin Gallery Boxhagenerstr. 36 10245 Berlin PR Contact: Iris Bitter pr@strychnin.com Phone: +49 160 915 15 965 www.strychnin.com