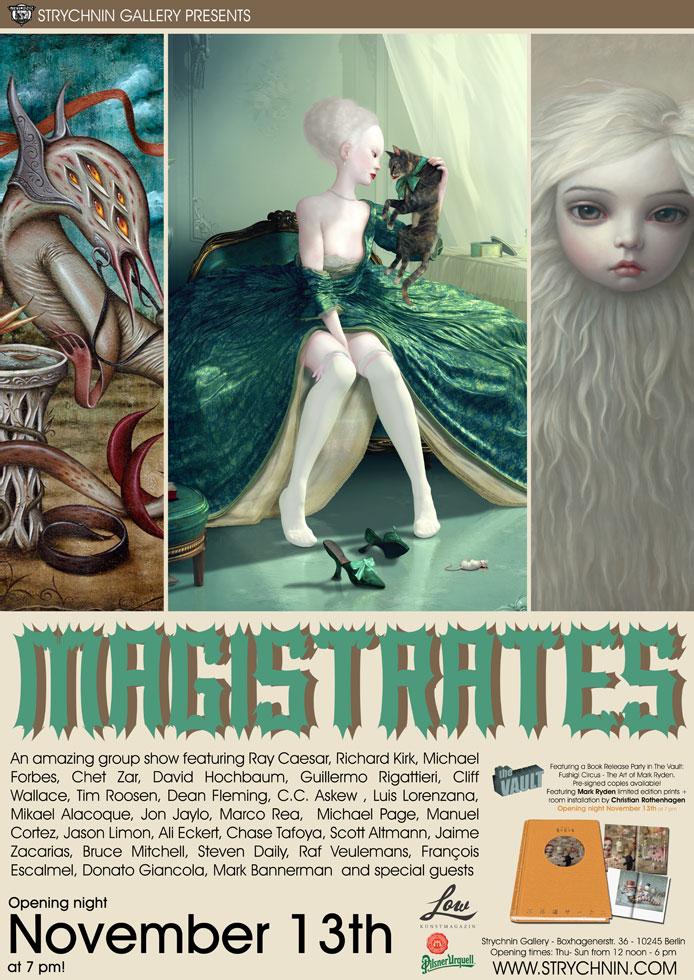 Invitation to the Magistrates exhibition, which features over 25 artists from all over the world.

Magistrates features Ray Caesar, Michael Forbes, Chet Zar, David Hochbaum, Guillermo Rigattieri, Cliff Wallace, Tim Roosen, Dean Flemming, C.C. Askew, Luis Lorenzana, Mikael Alacoque, Jon Jaylo, Marco Rea, Michael Page, Manuel Cortez, Jason Limon, Ali Eckert, Chase Tafoya, Scott Altmann, Jaimes Zacarias, Bruce Mitchell, Steven Daily, Raf Veulemans, François Escalmel, Donato Giancola, Richard Kirk and others. Opens November 13th at 7 pm.Magistrates features over 25 internationally renowned artists such as Ray Cesar, Michael Page, Chet Zar or Michael Forbes. Works in this show range from a variety of different media such as painting, etching, digital painting, photography and sculpture, making for an exhibition featuring many unique artistic positions from pop surrealism to fantastic art, special effects to lowbrow, pop art to urban art. Strychnin is also presenting an exclusive book release party for Mark Ryden's latest book, Fushigi Circus, as well as some prints by the famous artist that were previously sold out. Ryden, who by many is considered one of the Godfathers of lowbrow art, has pre-signed multiple copies of his latest collection of works especially for this book release party in The Vault.Magistrates – A group show featuring international pop-surrealist artists. Opens November 13th at 7 pm. Runs until December 6th Opening hours: Thu - Sun from 12- 6 pmWith galleries in three bustling hotspots – New York City, Berlin, and London – Strychnin Gallery is a playground for artists from all around the globe. It is a place where collaboration is encouraged, new projects are constantly developed and creativity is the one and only thing that truly counts.Owned by charismatic curator Yasha Young, Strychnin is dedicated to presenting emerging American artists to the European art world and vice versa. It features a variety of artists with particular individual styles rather than artists belonging to a collective “hip” movement. If you insist on putting a label on them, try lowbrow turned highbrow, pop surrealism or fantastic realism among others.The gallery participates in major international art fairs on a regular basis, including Bridge Art Fair, Liste, or Art Fair 21 in Cologne, which appointed gallery owner Yasha Young to its selection committee in 2008.Strychnin Gallery Boxhagenerstr. 36 10245 Berlin www.strychnin.comPR contact: Iris Bitter pr@strychnin.com Phone: +49 309700 2035

02-24-2020 | IT, New Media & Software
Pioneer Technology Group
MIAMI-DADE COUNTY VALUE ADJUSTMENT BOARD (VAB) SELECTS PIONEER TO IMPLEMENT AXIA …
Miami-Dade County's VAB has chosen Pioneer Technology Group's Axia solution to improve their VAB petitioning process and move to a streamlined, cost-effective process. As the real estate market changes, Miami-Dade continues to have the largest volume in petitions in the state of Florida. Miami-Dade sought to upgrade their legacy infrastructure to a scalable, robust, public-facing interface, to enable a self-service system; Axia fit the bill perfectly. Derek Long, Product Manager
12-05-2016 | Business, Economy, Finances, B …
Equities First Holdings, LLC
Equities First Holdings Hong Kong Limited Receives Reconfirmation of Hong Kong M …
The Hong Kong Money Lenders License was granted by the Hong Kong Eastern Magistrates Courts. Hong Kong, China -- Equities First Holdings Hong Kong Limited, the Asian subsidiary of Equities First Holdings, LLC (EFH, http://www.equitiesfirst.com) a global securities-based lender and a leader in alternative shareholder financing solutions, has received reconfirmation of its Hong Kong Money Lenders License from the Hong Kong Eastern Magistrates Courts. This license enables EFH to act as a
11-08-2016 | Politics, Law & Society
CloudQast
CloudQast’s programmes and platform for England and Wales’ Magistrates
Magistrates in England and Wales can now access video-based online learning programmes, including guides on managing yourself, teamworking and making judicial decisions. Most of these programmes, commissioned by The Magistrates Association (MA), are the work of the leadership communications specialist, CloudQast, which has also provided the platform where these programmes reside. While working with the Judicial College – which is responsible for arrangements for training the courts’ judiciary, including magistrates, in
04-08-2011 | Business, Economy, Finances, B …
AIMediaComms
AIMediaComms Media Relations Platform Selected by Judicial Communications Office
London – April 8, 2011 – AIMediaComms, the market leading provider of media and stakeholder interaction software, today announced that the Judicial Communications Office (JCO) has selected AIMediaComms’ media relations platform to enhance their level of service to the media and radically transform the press office function. AIMediaComms’ media relations management system allows the JCO to access all of the important information needed by the press team from anywhere,
10-21-2010 | Arts & Culture
Cultural Italy
Fresco Workshops Offered in Florence at the Palazzo Vecchio
Fresco is an early form of painting on plaster that dates back to ancient Crete. Fresco painting flourished during the Renaissance, and is still a popular art form today. You can learn the skills of this art form and create your own piece at the fresco workshops being offered at the Palazzo Vecchio. The workshop includes a tour of the artwork in the museum of the Palazzo
07-30-2008 | IT, New Media & Software
Pioneer Technology Group
NEW SOFTWARE WILL STRAMLINE THE VAB PROCESS IN LEE COUNTY, FL
Fort Myers, Florida – Taxpayers can save the trip downtown and file their petitions online. The previous process of filing a petition with the Value Adjustment Board (VAB) required a paper petition to be mailed or brought to the County Administration building. The number of petition filings has doubled in the last two years, and is not showing signs of letting up. The huge increase in fillings
Comments about openPR
OpenPR ist the nicest and most clearly laid out PR platform I have seen to this day. The press releases are displayed very nicely and clearly and without any unnecessary frills. The updates are fast and the finished release looks appealing and is clearly legible. Even with 16 years of experience one discovers new things from time to time. Congratulations!
Gabriele Ketterl, Director Marketing & PR, Menads