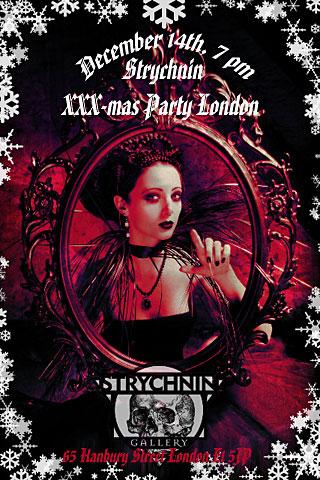 Featuring work by German photographer Annie Bertram and Christmas Ornaments by Elmer Presslee, Bijou, Angie Mason, Christina Graf, Laurie Lipton, Lucien Shapiro, Ver Mar, Jason Jacenko, Eduardo Benedetto, Till Krautkraemer, Chet Zar, Kristen Ferrell, Tim Roosen, Lisa Mei Ling Fong, Mimi S., Ansgar Noeth, Alexander Sterzel, Travis Lindquist, Danielle de Picciotto, Miraschi, Raf Veulemans, David Hochbaum, Marc Janssens, Virginie Ropars, Daniel Van Nes. Music by Alexander Wolfe. More than twenty of Strychnin’s artists have gotten into that special X-mas spirit and created Christmas Ornaments unlike any others. From goblins carrying gifts, beautifully framed miniature portraits, spiders printed on glass, to ornately crafted Victorian-looking lamps, each artist left his or her signature touch on the tree ornaments created for Strychnin Gallery’s XXX-mas show. These unique pieces of art are either limited edition or one of a kind – delightfully original, they represent Strychnin’s ability to inspire artists to new creativity and different fields of work: this time to be viewed on a Christmas tree. Photographer Annie Bertram, who lives and works in Switzerland, is widely known for her portraits. Often set in morbid locations and mystical landscapes, she tries to go beyond the obvious, showing thoughts, feelings, and fate in her images. She longs to tell stories and show the depth of her models as well as their sometimes strange yet always enchanting beauty. Annie has worked with many bands, creating artwork for Blutengel, Terminal Choice, Unheilig, Staubkind, Scream Silence and Metallspürhunde among others; she also works for major publications such as Orkus or Gothic Magazine. Music will be provided by Alexander Wolfe, a singer and songwriter from London. Strychnin Gallery London 65 Hanbury Street London E1 5JP www.strychnin.com Owner: Yasha Young yasha@strychnin.com PR: Iris Bitter production@strychnin.com With galleries in three bustling hotspots – New York City, Berlin, and London – Strychnin Gallery is a playground for artists from all around the globe. It is a place where collaboration is encouraged, new projects are constantly developed and creativity is the one and only thing that truly counts. Owned by charismatic curator Yasha Young, Strychnin is dedicated to presenting emerging American artists to the European art world and vice versa. It features a variety of artists with particular individual styles rather than artists belonging to a collective “hip” movement. If you insist on putting a label on them, try lowbrow turned highbrow, pop surrealism or fantastic realism among others. Founded in Brooklyn in 1998, the gallery opened a European showroom in Berlin in 2002. The US gallery has since moved to a location in Manhattan’s Chelsea district, opening with a group show featuring over 70 artists in October of 2006. Strychnin opened a third location in East London’s vibrant art scene right off of Brick Lane in October 2007.

03-25-2019 | Health & Medicine
Smilepod
Smilepod :– Making London Smile!
People often say it is hard to find a dentist you like in London. You want a convenient London Dentist, which provides friendly and professional dental care in an inviting and caring environment. This is the ethos behind Smilepod. All of their 6 centrally located dental practices are within 5 minutes of a tube station. They understand that Londoners are busy and don’t want to miss work to see the
02-19-2018 | Advertising, Media Consulting, …
FirstRank Digital Marketing
SEO Agency London
FirstRank is a leading digital marketing agency based in London, offers Website Development, Search Engine Optimization and Social media marketing service. we provide seamless growth for your business with our digital marketing services and solutions. Our highly competent teams are constantly adding the smile to the faces of our clients. Digital marketing is an investment and our digital marketing Agency focus on returns. In 2012, we started as a SEO company
06-14-2016 | Health & Medicine
Smilepod
Smilepod - Rejuvenate - Facial Rejuvenation London
Rejuvenate at Smilepod are pleased to offer a range of aesthetic treatments in all 7 of our central London studios. Treatments include, Botox, Dermal fillers, and Lip enhancements. All rejuvenation treatments are safely carried out by professional dentists in an approved clinical environment. Dentists have years of medical training and in-depth understanding of the mouth and facial area. Dentists regularly perform intricate procedures so you are in very safe hands. If you
05-21-2012 | Health & Medicine
Otto Bock HealthCare GmbH
London 2012
Off to the Paralympics with 15,000 spare parts Ottobock, the medical equipment company, is preparing for a large-scale operation at the Paralympic Games in London (29 Aug. to 9 Sept. 2012). Some 4,200 athletes are expected at the second largest sports event in the world. In order to ensure technical service for them, Ottobock is sending 78 orthopaedic technicians from 20 countries. The first vehicles are already transporting 9
04-20-2011 | IT, New Media & Software
darcydevelopments
Web Design in North London
Darcy Developments has moved to the West Hampstead area of North London. Originally based in Manchester and building up a strong client base there, including the exclusive Manchester Grammar School, they have decided to up shop and make the move to the big city. They specialise in Web Design, with an emphasis on clean, simple layouts with a strong message associated with it. They also provide ecommerce solutions such as Paypal integration
11-23-2010 | Business, Economy, Finances, B …
Propacea Limited
London House Prices Fall
Property agents in London have reported a record gap between asking prices and actual sales prices. According to analysis by agents Douglas & Gordon, which compared the asking prices on the Rightmove website with those logged on the Land Registry, there is now an average £79,000 gap between the two figures. This compares with a gap of £6,574 in 2003. Buyers now routinely offer £50,000 or more beneath
Comments about openPR
I can't but agree to the positive statements about your portal: easy to use, clear layout, very good search function, and quick editing!
Jens O'Brien, Borgmeier Media Communication