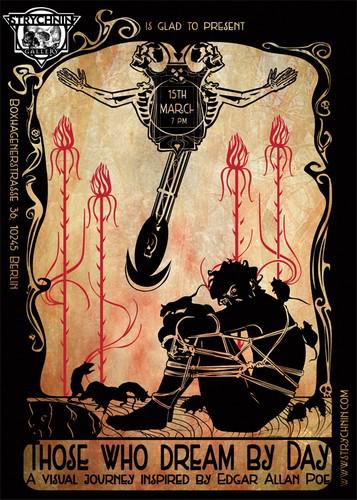 “Those who dream by day”, opening doors on the 15th of March at Strychnin Gallery, celebrates the imagination and oeuvres of the great Edgar Allan Poe.The mysterious man, whose life was short and filled with tragedy, left behind one of the most admired, questioned and influential literary body of works.While alive, his writings were ostracized and put under heavy scrutiny; many denied reading his publications. However, the public did yet not realize that Poe was profoundly ahead of his time. A pioneer of the gothic, macabre and thriller genre, he paved way for many detective-story authors to come.Poe’s popularity soared after his seemingly suicidal death on the 3rd of October, 1849, especially through French avant-garde writers and artists in the late 19th century. Finally, many came to understand and appreciate the psychological depth he sought to convey through his emphasis and curiosity of the dark, imaginative and “strange”. Multitudes were not only intrigued by his ingenious mind, but desired to understand his source of inspirations and meaning of his work.Thus, over the course of time, more and more distinguished artists have hoped to be associated with and emulate his writings through the visual medium.Strychnin Gallery wants to re-establish this admiration for Poe and thus was “Those Who Dream by Day” born. A handful of international artists were gathered and given a short story by Poe to take inspiration from. The pieces displayed will transcend only the personal connection and interpretation that each artist has to their given story. Making the gallery walls into a visual library of Edgar Allan Poe’s legacy. The artists involved will be; David Hochbaum, Kathryn Carr, Daniel Van Nes, Luisa Catucci, Bethany Marchman, Eliza Bolli, Joey Remmers, Yann Gobart, Akiza, Virginia Mori, Loredana Catania, Saturno Butto, Hara Katsiki, Danny van Ryswyk, Ufocinque, Lola, Leila Ataya, Robert Tirado, Nom Kinnear King, Nick Sheehy, Mandy Tsung, Saiko Kato and Chris Collins.Opened in 2002, Strychnin Gallery Berlin—like its sister galleries in NYC and London—concentrates its curatorial efforts on young, emerging artists whose work ranges from fantastic realism and pop surrealism to lowbrow, but who have not yet been categorized under trendy art world monikers. The diversity of the artists is mirrored in their choice of media, with paintings and photographs sharing the gallery space with sculpture and installations. The gallery participates in international art fairs such as Bridge Art Fair, Liste Cologne, and Art Fair 21, which appointed Young to its selection committee in 2008. In keeping with the vision of its founder, Strychnin not only emphasizes the individuality of its artists but also seeks to strengthen ties with Berlin’s creative community, often arranging for local DJs and musicians to liven up vernissages.Strychnin Gallery Boxhagenerstr. 36 10245 Berlin PR: Alejandra Valencia pr@strychnin.com

You can edit or delete your press release Strychnin Gallery presents: "Those Whoe Dream by Day", A Visual Journey Inspired by Edgar Allan Poe here

09-04-2013 | Arts & Culture
Strychnin Gallery
Nephelococcygia/// Cloud Cuckoo Land /// Solo Exhibition by David Hochbaum
In Aristophanes’ comedy “The Birds,” an imaginary city built in the clouds by birds at the instigation of two Athenians represented both a fantastic caricature of Athens in the poet's day and a sort of Philistine Utopia: full of gross enjoyments, hence, in literary allusion, cloudland- “fools' paradise”. A fools paradise in the clouds- is that where we’re going when we search the clouds for familiar objects? This action, coined precisely
01-24-2013 | Arts & Culture
Strychnin Gallery
ATTENTION EARTH!
It’s the year 2013, if you’re reading this Earth has shockingly survived the Mayan prediction and prophetic date of December 21st, 2012. Since this is being written in the past, it’s not certain what has happened to humankind. Did Earth collide with planet X? Or was the cataclysm of 2012 a positive physical and/or spiritual transformation for humanity. Be as it may, hopefully this day will mark the beginning of
11-29-2012 | Arts & Culture
Strychnin Gallery
METROPOLITAN
„Christian is a global ambassador for LOVE, he takes his heart and pours it into everything he does.“ -Shaney Jo Darden / Founder Global CEO / The Keep A Breast Foundation / Los Angeles As the year comes to an end, Strychnin Gallery saved the month of Decemeber for a special exhibition, Metropolitan. Metropolitan is an important rendition of today’s developement. With the passing of each moon, we become
10-14-2009 | Arts & Culture
Strychnin Gallery
Magistrates. A group show featuring international pop-surrealist artists. Also s …
Magistrates features Ray Caesar, Michael Forbes, Chet Zar, David Hochbaum, Guillermo Rigattieri, Cliff Wallace, Tim Roosen, Dean Flemming, C.C. Askew, Luis Lorenzana, Mikael Alacoque, Jon Jaylo, Marco Rea, Michael Page, Manuel Cortez, Jason Limon, Ali Eckert, Chase Tafoya, Scott Altmann, Jaimes Zacarias, Bruce Mitchell, Steven Daily, Raf Veulemans, François Escalmel, Donato Giancola, Richard Kirk and others. Opens November 13th at 7 pm. Magistrates features over 25 internationally renowned artists such

04-25-2019 | Industry, Real Estate & Constr …
Market Density
Global Poe Injectors Industry Market Analysis & Forecast
Global Poe Injectors Industry Market Analysis & Forecast 2018-2023, the revenue is valued at USD XX million in 2017 and is expected to reach USD XX million by the end of 2023, growing at a CAGR of XX% between 2018 and 2023. The production is estimated at XX million in 2017 and is forecasted to reach XX million by the end of 2023, growing at a CAGR of XX% between
04-24-2019 | Industry, Real Estate & Constr …
Market Density
Global POE Switch Market Professional Survey Report
This report studies POE Switch in Global market, especially in North America, China, Europe, Southeast Asia, Japan and India, with production, revenue, consumption, import and export in these regions, from 2013 to 2018, and forecast to 2025. This report focuses on top manufacturers in global market, with production, price, revenue and market share for each manufacturer, covering Cisco Avaya HP Dell Brocade Alcatel-Lucent Netgear Juniper D-Link Extreme Adtran Alaxala Huawei
12-06-2018 | Business, Economy, Finances, B …
QYResearch CO.,LIMITED
POE Industry Analysis by 2025:  QY Research
Global POE Market report is designed in a method that helps readers to acquire a complete knowledge about the overall market scenario for the projected period. This Market report consists of the brief profile of key players in the industry and their upcoming market plans and current developments during the forecasted period 2018 to 2025. The report of global POE market includes the competitive landscape section which provides the full
09-19-2017 | Advertising, Media Consulting, …
Transparency Market Research
PoE Injector Market to Draw Mega Growth with Ballooning Application of PoE Techn …
The global power over ethernet (PoE) injector market is envisioned to garner a colossal growth from connectivity applications with the soaring usage of the PoE technology and solutions. The PoE technology could be used to power PoE compatible devices such as wireless access points and voice over internet protocol (VoIP) phones. Thus, with the growing usage of such devices, the demand for PoE injector is foretold to increase correspondingly. Wireless
06-29-2017 | Science & Education
Reports Monitor
Global Power Over Ethernet (POE) Controllers Market
Global Power Over Ethernet (POE) Controllers Market Research Report provides insights of the industry over past 5 years and a forecast until 2022. The Report studies, the Market status and future trend in the Global market, splits by type and by applications, to fully and deeply researched and reveal the market situation and future forecast. The Power Over Ethernet (POE) Controllers Market report would come in handy to understand your competitors
04-13-2016 | IT, New Media & Software
Perle Systems
Perle Launches Fully Compliant PoE+ Injectors
NASHVILLE, TN—April 12th, 2016 — Perle Systems, a manufacturer of secure device networking hardware, today announced the launch of the PINJ30 Power over Ethernet (PoE) Injector. PoE Injectors are designed to add up to 30W power to Ethernet CAT5/6 cabling and provide electricity to connected devices such as wireless access points, pan-tilt-zoom (PTZ) cameras and video phones. Power over Ethernet Injectors enable increased flexibility for the location of installed equipment and
Comments about openPR
We publish our press releases on openPR.de because we like people who are "open" - just like us.
Frank Obels, CEO, INCONET - Informationssysteme, Communication und Netzwerkberatung GmbH