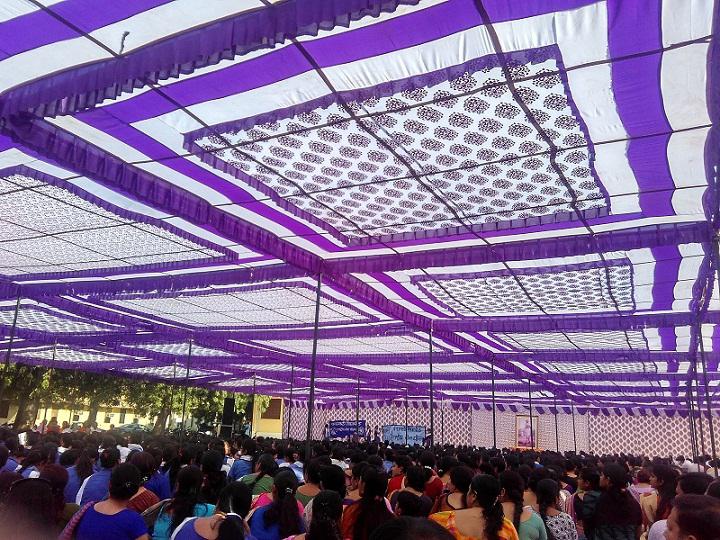 A 1946 quote of Mahatma Gandhi says” Bansathali is enshrined in my heart” and undoubtedly Banasthali draws its inspiration from the well known Gandhi quote “What is really needed to make democracy function is not knowledge of facts but right education.” Who else but the Mahatma could have said "Non-violence is the greatest force at the disposal of mankind. It is mightier than the mightiest weapon of destruction devised by the ingenuity of man." Befittingly, the International Day of Non-Violence is marked on 2 October, the birthday of Mahatma Gandhi, leader of the Indian independence movement and pioneer of the philosophy and strategy of non-violence.The Gandhi Jayanti celebrations at Banasthali started off on 01 Oct 2017 with an exhibition on Gandhiji by the students at Central Library followed by an Essay Competition and Bhagavad Gita Shloka Recitation Competition at Vani Mandir. Sunrise on 02 Oct 2017 saw a massive rally by NSS students from Pragya Mandir to Vani Mandir. With a reach of over 50 villages, Radio FM Banasthali 90.4 had a special broadcast on Gandhiji. Thousands of students and faculty assembled in front of Vani Mandir for a Sarva Dharam Prartna and Bhajans which included the favorite ones of Gandhiji such as Raghupathi Raghav Rajaram and Vaisnav Jan to.With impeccable record of community outreach activities round the year, NSS and Banasthali Sewa Dal which included Guides and NCC volunteers carried out massive Swachh Bharat Abhiyan in the campus. Bal Sabha at Saraswati Mandir, Sharda Mandir and Sakuntalam saw the school students of Banasthali at their very best in paying tribute to Gandhiji. The exhibition at Lalit Mandir drew appreciation from one and all. The Gandhi for peace exhibition at Vani Mandir put up by different departments which included visual art, design, management etc was truly outstanding. The documentary on Gandhiji made by the students was at its creative best. The evening program had poem recitations on Gandhiji, speeches on Gandhian philosophy and a quiz competition covering various aspects of Mahatma’s life including a rapid fire round. At Banasthali, celebrating Gandhi Jayanti is much more than a routine. If there is one educational institution in India today where thousands of students participate in Gandhi Jayanti celebrations, then beyond doubt it must be Banasthali. The students and faculty who attended and participated in the Gandhi Jayanti celebrations left with beaming faces and pride that they were indeed part of an institution which is a jewel in the crown among the women’s universities not only in India today but across the globe.   For more details about Banasthali see http://www.banasthali.org/About Banasthali: The Institution which is also the largest fully residential women’s university in the world has played a big role in revolutionizing women’s education in the country for the last eight decades with a belief that there is a tremendous role of higher education in empowering the women. Banasthali has scripted numerous success stories in a wide range of fields, and stands tall among the citadels of learning in India today. Team Banasthali with Vice Chancellor J C Bose Memorial Award for eminent scientist recipient Prof Aditya Shastri a highly acclaimed alumnus of BITS Pilani, SUNY State University of New York Stony Brook and MIT USA is indeed racing forward to be the very best among global women universities. Proud to be Banasthali alumni who call themselves as Banasthalites can be found in all latitudes, longitudes and altitudes in all walks of life across the globe.Banasthali University P.O. Banasthali Vidyapith Rajasthan – 304022 Phone 91 1438 228456 / 228341 Email: info@banasthali.ac.in Website: http://www.banasthali.org Facebook: www.facebook.com/Banasthali.org

02-25-2019 | Tourism, Cars, Traffic
Varanasi Trip
Bharat Kala Bhavan to restore Mahatma Gandhi memories
The Bharat Kala Bhavan will showcase 75 paintings and two sculptural work of Mahatma Gandhi who is the Father of the Nation. With this, it will display the life of Gandhi prey and post-independence movement. The special exhibition is termed as “Gandhi “, and it also incorporates the work of various artists such as famous painter MF Hussain, Akbar Padmavati, Nandlal and the rest. Banaras Hindu University is all set
08-13-2018 | Science & Education
Ajeenkya D Y Patil
Varun Gandhi advocates Higher Spend on Research and Development
Excitement and Spirits were at an all time at the D. Y. Patil Campus in Navi Mumbai as they welcomed Varun Gandhi, Loksabha MP from Sultanpur. Also present on this occasion were Dr. Ajeenkya D.Y. Patil and Vijay D. Y .Patil. Dr. Ajeenkya D.Y. Patil, Chairman, Ajeenkya D. Y . Patil Group, in his address expressed deep admiration for the body of social work undertaken by Varun Gandhi and his
05-09-2011 | Media & Telecommunications
Mirchi Movies
Gandhi is Still with Us
Mumbai, India - Finding Gandhi, produced by Shethia Audio Video Private Limited, is an introspective movie that focuses on Hasmat Ullah a mechanic and a god-fearing man who’s presented with the responsibility of repairing a Ford V8 car that once held the ashes of Mahatma Gandhi. A bomb explosion suddenly rocks his small community and the ensuing chaos forces him to choose between finishing this repair job, or taking to the
01-10-2011 | Arts & Culture
Ocean Villas Group Pte. Ltd.
Mahatma Gandhi South African home named Satyagraha
We recently reported that the former South African home of Mahatma Gandhi was up for sale and that Coal India Limited were making their second attempt to buy the property. We have since discovered this information to be incorrect. Read original Gandhi article: http://blog.oceanvillasgroup.com/mahatma-gandhi-south-african-home-up-for-sale/ The Gandhi house is, in fact, currently owned by Voyageurs du Monde Group who bought the home in September 2009 and it is not for sale. Voyageurs du Monde is
01-05-2011 | Industry, Real Estate & Constr …
Ocean Villas Group Pte. Ltd.
Mahatma Gandhi South African home up for sale
The former Johannesburg home of Mahatma Gandhi is on the market and Coal India Limited, an Indian state controlled company based in Kolkata, are making their second attempt to buy the South African property. Mahatma Gandhi travelled to South Africa in 1893 to handle a legal case in Pretoria and moved to Johannesburg in 1903. After living in rooms behind his office on Rissik Street, Johannesburg for some time, Gandhi moved into
06-09-2009 | Industry, Real Estate & Constr …
SGS Industrial Services
SGS Project Finance Services ensured the completion of the Rajiv Gandhi Internat …
Three years ago, the GMR Hyderabad International Airport Ltd. initiated the development of an international airport, addressing the strong economic growth of India’s Hyderabad region. The scope of the project covered the construction of 72m high Air Traffic Control Tower and a 60m wide, 4.2 km long runway. In addition to this, a maze of aprons, taxi ways, approach roads, landscaping, drains and culverts’ UG sumps, a storm water collection pond
Comments about openPR
OpenPR is clearly structured and remains true to its principle of confining itself to the essential parts. OpenPR has proven to be a very good and reliable partner to our media agency: Within the shortest time the releases are online and go down well with the media representatives. The success of OpenPR is reflected in the steadily increasing number of press releases. It is good that OpenPR exists!
Ursula Koslik, Director Marketing & PR, F+W Hamburg