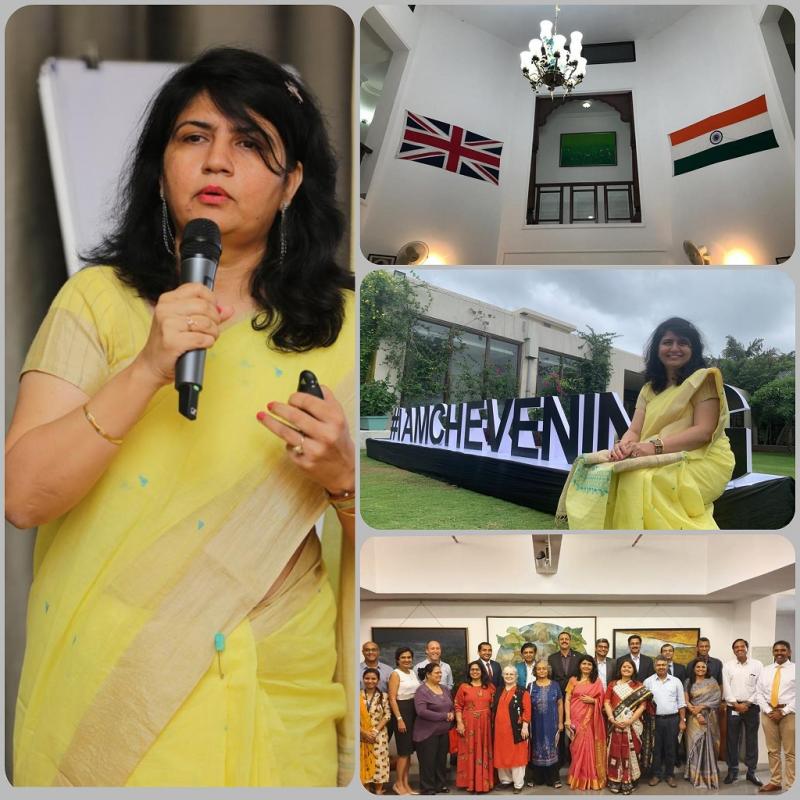 Chevening is the UK government’s international awards programme aimed at developing global leaders since 1983. There are two types of award – Chevening Scholarships and Chevening Fellowships – the recipients of which are personally selected by British embassies and high Commissions throughout the world. Chevening Research, Science, and Innovation Leadership Fellowship (CRISP) Hosted by the University of Oxford is aimed at mid-career professionals with very high potential in the fields of science, innovation, and business from India and Sri Lanka. The programme is funded by the Foreign & Commonwealth Office – FCO and the fellowship is hosted by St. Cross College, University of Oxford. Chevening Fellowships are an important element of Britain’s public diplomacy effort and offers opportunities to mid-career leaders and influencers from across the globe. Fellows are often people of significant standing in their home countries and have completed some element(s) of higher education already. Chevening Fellowships offer dynamic training, professional development and other opportunities for individuals to spend time in the UK, researching subject matter that is relevant to their professional interests as well as to the UK’s international strategic priorities. The first CRISP Alumni Conference with an aim to bring 30 diverse Chevening Scholars since the start of the fellowship was organized during 23 – 24 Aug 2019 at the elegant Hyatt Hyderabad Gachibowli. The event was organized by the CRISP 2018 batch and supported by the Chevening Alumni Programme Fund – CAPF. CRISP scholars for the ignite session included names to reckon with Magesh Nandagopal, Michael Jayawarddana, Sreedevi Devireddy, Reena Dayal, Anthony Vipin Das, Amit Sharma, Sudip Roy, Karon Shaiva, Vishal Sardeshpande, Shalini Sharma, Shilpa Ashok Pandit, Kasturi Das, Meghna Apparao. Team SAHE – Society for Advancement of Human Endeavor did a session on of the citizen, by the citizen and for the citizen. Rolls Royce Session had presentation by Janakiraman Ramakrishnan. It is a matter of great pride that Chevening Fellow Dr Suphiya Khan is a multiple award winning faculty at Banasthali which is world’s largest fully residential women’s university. She is not only an accomplished researcher who is goal oriented and time bound but also committed to developing economically viable new technologies based on system changing solutions. Dr Suphia Khan from Banasthali spoke on her journey from water and health laboratory to Drumlins Water Technologies Pvt Ltd which is her mission with passion venture. The first day schedule included visit to L V Prasad Eye Institute – LVPEI considered one among the very best globally and a dinner at Banjara Hills hosted by Dr Andrew Fleming the British Deputy High Commissioner in Hyderabad. Day two had a visit to T Hub at IIIT Hyderabad which has been fostering a culture of Innovation for the past several years. The T Hub proceedings were piloted by Jayesh Ranjan Secretary Information Technology Govt of Telangana and Srinivas Kollipara Founding Executive & CEO of T Hub. The panel discussion experts included Dr Evita Fernandez, Anusha Bharadwaj and Satish Upadhyay. The second day highlights include a Leadership session by indomitable former Dean of Indian School of Business – ISB Ajit Ragnekar presently Director General at Research and Innovation Circle of Hyderabad. It goes without saying that the proceedings of this conference will usher in more research, innovations and startups in coming times. For more details about Banasthali see http://www.banasthali.org/ Banasthali Vidyapith Banasthali Rajasthan – 304022 Phone 91 1438 228456 / 228341 Email: info@banasthali.ac.in Website: http://www.banasthali.org Facebook: www.facebook.com/Banasthali.org About Banasthali: Established in 1935, the Institution which is also the largest fully residential women’s university in the world has played a big role in revolutionizing women’s education and empowerment in India for the last eight decades. Banasthali has scripted numerous success stories in a wide range of fields, and stands tall among the citadels of learning in India today. Proud to be Banasthali alumni who call themselves as Banasthalites can be found in all latitudes, longitudes and altitudes in all walks of life across the globe. Banasthali has the pride of being chosen as a Faculty Development Centre under the MHRD Govt of India Pandit Madan Mohan Malaviya National Mission on Teachers and Teaching (PMMMNMTT) as well as for hosting Atal Incubation Centre (AIC) by NITI Aayog Apart from various National Rankings which include India Today #2, FICCI University of the year 2015, NAAC A grade, MHRD NIRF 29, in recent past, Banasthali has been in national and international media attention for getting Quacquarelli Symonds QS Asia University Ranking, QS BRICS Ranking, Diamond status under QS i-Gauge Indian University Rating and the overall Four Star Ranking in - QS Stars Rated for Excellence with 5 Stars for each for Teaching, Employability, Facilities, Arts & Culture and Inclusiveness.

08-29-2019 | Sports
Banasthali
At Banasthali Everyday is National Sports Day and Keep Fit Day
To commemorate the birth anniversary of 'The Wizard', hockey legend Olympian Major Dhyan Chand who had scored over 400 goals in his career from 1926 to 1948, India celebrates 29 Aug every year as National Sports Day. With over 16000 girls coming from different parts of the nation, the 850 acre Banasthali campus itself is a mini India echoing the lines of Gurudev Rabindranath Tagore in National anthem “Panjaba Sindhu
08-26-2019 | Arts & Culture
Banasthali
Janmasthami 2019 Celebrations Galore at Banasthali
The rich ethnic diversity of India truly comes alive when the Banasthali campus celebrates various festivals spread over the year. During these celebrations, the students and faculty of Banasthali add a spectrum of colours and gaiety to campus life and indeed rise above caste and creed and develop mutual respect for all religions. With over 16000 students coming from different parts of India, the 850 acre Banasthali campus itself is
08-23-2019 | Science & Education
Banasthali
Banasthali School of Earth Sciences Celebrates National Remote Sensing Day 2019
The day is in honour of Dr Vikram Ambalal Sarabhai born on 12 Aug 1919 undisputedly the father of the Indian Space Program who was a great institution builder without any parallel. Some of the institutions where he played a stellar role for their establishment include at Ahmedabad Physical Research Laboratory (PRL), Space Application Centre and Indian Institute of Management (IIM); at Thiruvananthapuram Vikram Sarabhai Space Centre; at
08-21-2019 | Arts & Culture
Banasthali
Manipuri Dancer Bimbavati Devi Enthralls audience at Banasthali
It is said in the Great Preface of “The Book of Songs,” an anthology of Chinese poems dating from the 10th to the 7th century BC: “The emotions are stirred and take form in words. If words are not enough, we speak in sighs. If sighs are not enough, we sing them. If singing is not enough, then unconsciously our hands dance them and our feet tap them.” Society for the

05-11-2020 | Health & Medicine
Naxon Labs
Naxon Labs launches Brain to Computer Interface solution to explore the mind: Na …
Montevideo, May 11th, 2020. Naxon Labs, a company working with portable EEG technology to obtain neuronal information based on brain waves, launched today Naxon Explorer: a cheap and useful tool and neurofeedback system for professionals in the fields of Neuroscience, Psychology, Medicine, Engineering and Information Technology. Explorer consists of an electroencephalography monitor adapted for portable EEG (Electroencephalography), in particular the Muse headset by Interaxon Inc. With Naxon Explorer you can visualize,
01-11-2019 | Science & Education
Banasthali
Dr Suphiya Khan from Banasthali Selected for 2019 Oxford Chevening Fellowship
Chevening is the UK government’s international awards programme aimed at developing global leaders since 1983. This year marks its 35th anniversary. Funded by the Foreign and Commonwealth Office (FCO) and partner organisations, Chevening offers two types of award – Chevening Scholarships and Chevening Fellowships – the recipients of which are personally selected by British embassies and high Commissions throughout the world. Chevening Fellowships are an important element of Britain’s public diplomacy
10-30-2017 | Arts & Culture
The Inspira Group
“Anya Paris” by Brenda Parker is published
ISBN #978-1944156503 “Anya Paris” by Brenda Parker is published An intriguing tale of mystery, love and long-forgotten secrets About the Book: In fifties Northumberland - a time and place where tradition and progress are about to collide head-on - a young restorer of art is engaged to rescue some neglected paintings. Arriving on a tide of anticipation, the enchanting young painter brings a breath of very fresh air into the dusty midst of the
08-28-2013 | Science & Education
MyPal Online SchoolTrinadha Learning Environment Pvt Ltd
National Talent Search in Computer Science for High School Students by MyPal Onl …
The field of Computer Science and Programming which was once thought of as a useful tool that supports various core subjects of science, mathematics and engineering. Hyderabad, Andhra Pradesh, India., August 28, 2013 -- Online National Talent Search in Computer Science for High School Students For the first time in India, a National Talent Search in Computer Science for High School Students is being conducted by MyPal Online School and
10-13-2009 | IT, New Media & Software
iYogi
iYogi Expands Global Executive Management Team Appoints Joy Basu as Chief Financ …
Gurgaon, India, October 5, 2009: iYogi, a global direct to consumer and small business remote computer tech support provider, today announced the appointment of Joy Basu as the Chief Financial Officer (CFO), As CFO, Mr. Basu will be part of the Global Executive Management team at a time when the company is emerging as the fastest growing provider of remote technical support. Prior to joining iYogi, Basu was CFO of Rediff.com
Comments about openPR
Your portal is fast, simple, and easy to use. Others may have more functions but they also demand more editing time, you have to preformat the text in order to achieve a good result etc. I think openPR is really fantastic!
Andreas Knepper, wallmedien AG