Gandhi is Still with Us 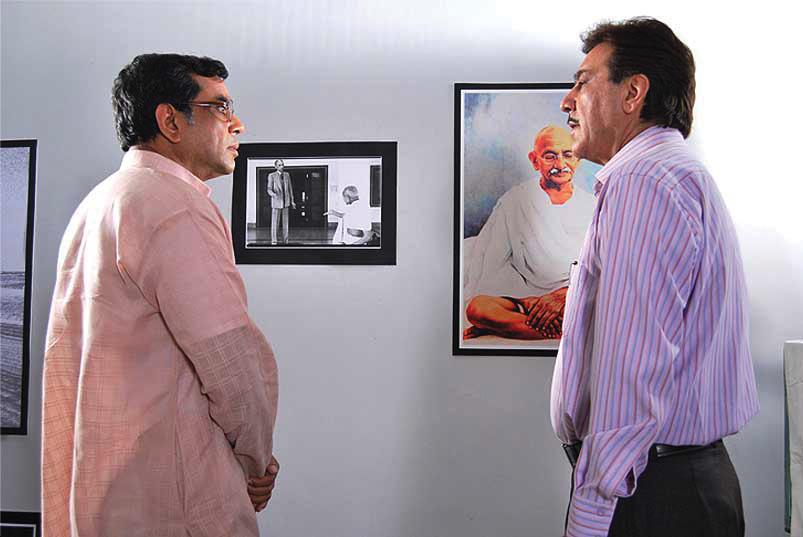 Mumbai, India - Finding Gandhi, produced by Shethia Audio Video Private Limited, is an introspective movie that focuses on Hasmat Ullah a mechanic and a god-fearing man who’s presented with the responsibility of repairing a Ford V8 car that once held the ashes of Mahatma Gandhi.A bomb explosion suddenly rocks his small community and the ensuing chaos forces him to choose between finishing this repair job, or taking to the streets to protest with his neighbors and community leaders.Although it may seem implausible that Gandhi's ashes would've been carted around in an old gas guzzler, but following Gandhi's death, his body was cremated and his ashes were given to family, friends and various followers. To this day, no one actually knows how many people received Gandhi's ashes or how much of his ashes still exist. As recently as 2010, some of his ashes were scattered at sea—more than 60 years after his assassination. Finding Gandhi, directed by Amit Rai, is the recepient of around 20 international awards including the Audience Choice Award (London Indian Film Festival), Best Feature Film (Los Angeles Reel Film Festival), Best Feature Film (Radar Hamburg International Film Festival), Best First Film Director's Award (South Africa International Film Festival) and the Silver Palm Award (Mexico International Film Festival).The film screens May 17 during the Marché du Film, which takes place in tandem with the Cannes Film Festival along the French Riviera.About Shethia Audio Video Private Limited and Road to Sagam FilmShethia Audio Video Private Limited, a vibrant, diversified, broad-based, entertainment conglomerate based in India, is a leader in niche content creation, production, distribution, licensing and marketing. For four decades, the company has been at the forefront of India's exciting entertainment industry. The company’s production division Gypsy Films, which produced Finding Gandhi, is a platform for developing inspiring and meaningful cinema for a global audience.About Mirchi MoviesFinding Gandhi is repped by Mirchi Movies--a division of Bennett, Coleman and Company.Contact:Mirchi Movies Dr. Dadabhoy Naoroji Road The Times of India Building Mumbai, 400001 IndiaPress Contact:rita (at ) 3vmediainternational.de Tel: +49 175 751 9737

05-09-2011 | Media & Telecommunications
Mirchi Movies
A Comedic Look at the Financial Crisis in With Love to Obama at the Marché du F …
Mumbai, India - With Love to Obama, produced by Revel Films Pvt. Ltd and directed by Subhash Kappor, is a satirical comedy set in the USA and India that uses the global financial meltdown as a backdrop. The film screens this week during the Marché du Film, which takes place in tandem with the Cannes Film Festival in the south of France. In the film, the main charter, Om, an Indian-American

02-25-2019 | Tourism, Cars, Traffic
Varanasi Trip
Bharat Kala Bhavan to restore Mahatma Gandhi memories
The Bharat Kala Bhavan will showcase 75 paintings and two sculptural work of Mahatma Gandhi who is the Father of the Nation. With this, it will display the life of Gandhi prey and post-independence movement. The special exhibition is termed as “Gandhi “, and it also incorporates the work of various artists such as famous painter MF Hussain, Akbar Padmavati, Nandlal and the rest. Banaras Hindu University is all set
08-13-2018 | Science & Education
Ajeenkya D Y Patil
Varun Gandhi advocates Higher Spend on Research and Development
Excitement and Spirits were at an all time at the D. Y. Patil Campus in Navi Mumbai as they welcomed Varun Gandhi, Loksabha MP from Sultanpur. Also present on this occasion were Dr. Ajeenkya D.Y. Patil and Vijay D. Y .Patil. Dr. Ajeenkya D.Y. Patil, Chairman, Ajeenkya D. Y . Patil Group, in his address expressed deep admiration for the body of social work undertaken by Varun Gandhi and his
10-04-2017 | Science & Education
Banasthali
Banasthali Celebrates Mahatma Gandhi Jayanti - International Day of Non-Violence
A 1946 quote of Mahatma Gandhi says” Bansathali is enshrined in my heart” and undoubtedly Banasthali draws its inspiration from the well known Gandhi quote “What is really needed to make democracy function is not knowledge of facts but right education.” Who else but the Mahatma could have said "Non-violence is the greatest force at the disposal of mankind. It is mightier than the mightiest weapon of destruction devised by
01-10-2011 | Arts & Culture
Ocean Villas Group Pte. Ltd.
Mahatma Gandhi South African home named Satyagraha
We recently reported that the former South African home of Mahatma Gandhi was up for sale and that Coal India Limited were making their second attempt to buy the property. We have since discovered this information to be incorrect. Read original Gandhi article: http://blog.oceanvillasgroup.com/mahatma-gandhi-south-african-home-up-for-sale/ The Gandhi house is, in fact, currently owned by Voyageurs du Monde Group who bought the home in September 2009 and it is not for sale. Voyageurs du Monde is
01-05-2011 | Industry, Real Estate & Constr …
Ocean Villas Group Pte. Ltd.
Mahatma Gandhi South African home up for sale
The former Johannesburg home of Mahatma Gandhi is on the market and Coal India Limited, an Indian state controlled company based in Kolkata, are making their second attempt to buy the South African property. Mahatma Gandhi travelled to South Africa in 1893 to handle a legal case in Pretoria and moved to Johannesburg in 1903. After living in rooms behind his office on Rissik Street, Johannesburg for some time, Gandhi moved into
06-09-2009 | Industry, Real Estate & Constr …
SGS Industrial Services
SGS Project Finance Services ensured the completion of the Rajiv Gandhi Internat …
Three years ago, the GMR Hyderabad International Airport Ltd. initiated the development of an international airport, addressing the strong economic growth of India’s Hyderabad region. The scope of the project covered the construction of 72m high Air Traffic Control Tower and a 60m wide, 4.2 km long runway. In addition to this, a maze of aprons, taxi ways, approach roads, landscaping, drains and culverts’ UG sumps, a storm water collection pond
Comments about openPR
I can't but agree to the positive statements about your portal: easy to use, clear layout, very good search function, and quick editing!
Jens O'Brien, Borgmeier Media Communication