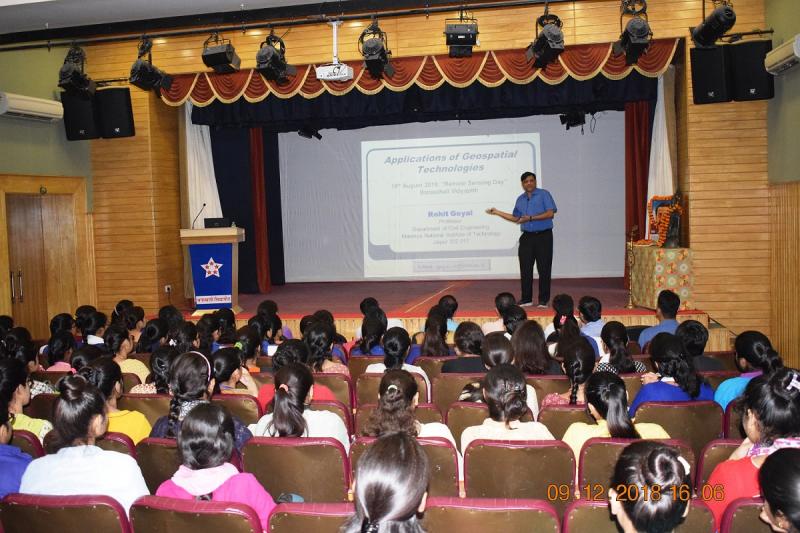 The day is in honour of Dr Vikram Ambalal Sarabhai born on 12 Aug 1919 undisputedly the father of the Indian Space Program who was a great institution builder without any parallel. Some of the institutions where he played a stellar role for their establishment include at Ahmedabad Physical Research Laboratory (PRL), Space Application Centre and Indian Institute of Management (IIM); at Thiruvananthapuram Vikram Sarabhai Space Centre; at Kalpakkam Fast Breeder Test Reactor (FBTR); at Kolkata Varaiable Energy Cyclotron Centre Project; at Hyderabad Electronics Corporation of India Limited (ECIL); and at Jaduguda Uranium Corporation of India Limited (UCIL).India observes every year the birthday of Dr Vikram Sarabhai as Remote Sensing Day. Remote sensing is the process of detecting and monitoring the physical characteristics of an area by measuring its reflected and emitted radiation at a distance from the targeted area. Special cameras collect remotely sensed images of the Earth, which help researchers "sense" things not only across the length and breadth of the Earth bur also at depth of the oceans. The eight decade old Banasthali which is also the largest fully residential women’s university in the world has established a rich legacy and heritage of observing various days of national and international importance round the year. The evolutionary details of the School of Earth Sciences at Banasthali starts from establishment of Geography department in 2008 followed by Remote Sensing in 2011 and then after Geology and commissioning of the new building in 2013 followed by Environmental Science in 2016. With state of the art facilities and faculty from lead institutions in India, Banasthali School of Earth Sciences is a hub of over 400 students drawn from different parts of India enrolled in bachelors masters and doctoral programmers in various departments. For 2019 which marks Centenary Year of Dr Vikram Sarabhai birthday, Remote Sensing Day Celebrations at Banasthali held at the elegant Gyan Mandir auditorium, the Chief Guest was well known alumnus of Birla Institute of Technology and Science BITS Pilani Dr Rohit Goyal presently Professor – HAG at MNIT Jaipur. His credentials include recipient of Career Award for Young Teachers by AICTE in 1995; Member SEAC for Rajasthan State from 2008-2010, recipient of Outstanding Paper Award in 8th Int. Conf. on Environmental Science and Technology 2016. His administrative responsibilities include Dean of Planning & Development, Research & Consultancy and Academic Affairs at MNIT Jaipur. Dr Kartar Singh Faculty from Banasthali introduced the Chief Guest to the audience who was received with a colourful bouquet by Prof Rashmi Sharma Dean School of Earth Sciences and the proceedings started after auspicious lamp lighting by the Chief Guest and other dignitaries. Prof Rohita Goyal gave a talk on GIS and Application of Geospatial Technologies which was followed by an interactive session with the participants. A special video by Ms Saloni Rajput, Ms Pratibha Kachhawa and Ms Warsha Roy on remote sensing including the launch of Chandrayaan II was played which was appreciated by one and all. Dr Chilka Sharma faculty proposed the Vote of thanks. The highlights of the celebration include debate completion on Societal and Economical Impacts of Satellite Imaging Technology which was judged by Dr Monika Jain Professor of Home Science and Dr Saurabh Mukherjee Professor of Computer Science The first prize was bagged by Ms Sakshi Sharma, third year student of BTech Computer Science and the second prize by Ms Mansi Kesarwani third year student of BSc Geology. The third prize was shared by two students, Ms Poorna Sankrit first year BSc Geology and Ms Akriti Singh Kushwaha, second year BSc Geology. Students and faculty who participated in the Remote Sensing Day celebrations at Banasthali left with beaming faces and pride that they were indeed part of an institution which is a shining jewel in the crown among the institutions not only in India today but across the globe.For more details about Banasthali see http://www.banasthali.org/Banasthali Vidyapith Banasthali Rajasthan – 304022 Phone 91 1438 228456 / 228341 Email: info@banasthali.ac.in Website: http://www.banasthali.org Facebook: www.facebook.com/Banasthali.orgAbout Banasthali: Established in 1935, the Institution which is also the largest fully residential women’s university in the world has played a big role in revolutionizing women’s education and empowerment in India for the last eight decades. Banasthali has scripted numerous success stories in a wide range of fields, and stands tall among the citadels of learning in India today. Proud to be Banasthali alumni who call themselves as Banasthalites can be found in all latitudes, longitudes and altitudes in all walks of life across the globe. Banasthali has the pride of being chosen as a Faculty Development Centre under the MHRD Govt of India Pandit Madan Mohan Malaviya National Mission on Teachers and Teaching (PMMMNMTT) as well as for hosting Atal Incubation Centre (AIC) by NITI Aayog Apart from various National Rankings which include India Today #2, FICCI University of the year 2015, NAAC A grade, MHRD NIRF 29, in recent past, Banasthali has been in national and international media attention for getting Quacquarelli Symonds QS Asia University Ranking, QS BRICS Ranking, Diamond status under QS i-Gauge Indian University Rating and the overall Four Star Ranking in - QS Stars Rated for Excellence with 5 Stars for each for Teaching, Employability, Facilities, Arts & Culture and Inclusiveness.

08-30-2019 | Associations & Organizations
Banasthali
Chevening Fellow Prof Suphia Khan Banasthali Participates in CRISP IGNITE 2019 A …
Chevening is the UK government’s international awards programme aimed at developing global leaders since 1983. There are two types of award – Chevening Scholarships and Chevening Fellowships – the recipients of which are personally selected by British embassies and high Commissions throughout the world. Chevening Research, Science, and Innovation Leadership Fellowship (CRISP) Hosted by the University of Oxford is aimed at mid-career professionals with very high potential in the fields
08-29-2019 | Sports
Banasthali
At Banasthali Everyday is National Sports Day and Keep Fit Day
To commemorate the birth anniversary of 'The Wizard', hockey legend Olympian Major Dhyan Chand who had scored over 400 goals in his career from 1926 to 1948, India celebrates 29 Aug every year as National Sports Day. With over 16000 girls coming from different parts of the nation, the 850 acre Banasthali campus itself is a mini India echoing the lines of Gurudev Rabindranath Tagore in National anthem “Panjaba Sindhu
08-26-2019 | Arts & Culture
Banasthali
Janmasthami 2019 Celebrations Galore at Banasthali
The rich ethnic diversity of India truly comes alive when the Banasthali campus celebrates various festivals spread over the year. During these celebrations, the students and faculty of Banasthali add a spectrum of colours and gaiety to campus life and indeed rise above caste and creed and develop mutual respect for all religions. With over 16000 students coming from different parts of India, the 850 acre Banasthali campus itself is
08-21-2019 | Arts & Culture
Banasthali
Manipuri Dancer Bimbavati Devi Enthralls audience at Banasthali
It is said in the Great Preface of “The Book of Songs,” an anthology of Chinese poems dating from the 10th to the 7th century BC: “The emotions are stirred and take form in words. If words are not enough, we speak in sighs. If sighs are not enough, we sing them. If singing is not enough, then unconsciously our hands dance them and our feet tap them.” Society for the