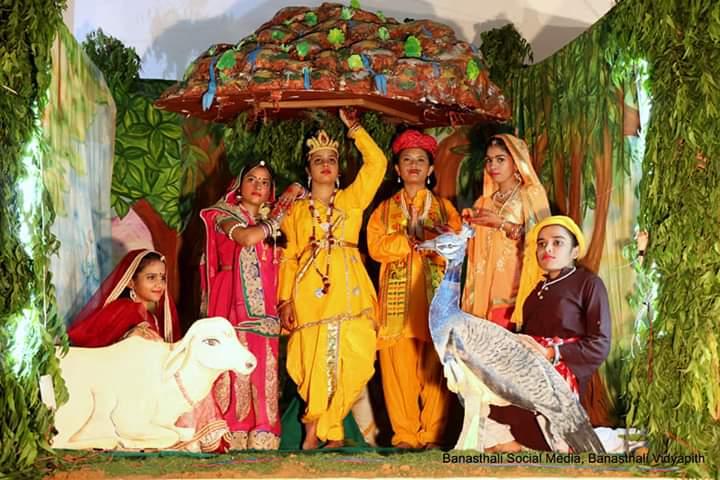 The rich ethnic diversity of India truly comes alive when the Banasthali campus celebrates various festivals spread over the year. During these celebrations, the students and faculty of Banasthali add a spectrum of colours and gaiety to campus life and indeed rise above caste and creed and develop mutual respect for all religions. With over 16000 students coming from different parts of India, the 850 acre Banasthali campus itself is a mini India echoing the lines of Gurudev Rabindranath Tagore in National anthem “Panjaba-Sindhu-Gujarata-Maratha Dravida-Utkala-Banga.” Janmashtami also called Gokulashtami which marks the birth of Krishna an avtar of Lord Vishnu usually falls in the month of Aug – Sep every year and is calculated by the traditional Hindu lunar calendar as the eighth day of the dark fortnight Krishna Paksh in the month of Bhadra. Krishna not only inspired many followers during his lifetime but also beyond it. Even before the internet arrived in full force, by the 1980s there were around 3000 translations of the Bhagavad Gita in almost 50 languages.On 23 Aug 2019 Janmasthami day, Banasthalites definitely gave dahi- handi a miss, only to replace that tradition with the aesthetically appealing and visually mesmerizing decorated tableaus popularly referred as ‘Jhankis’. Students dressed up in beautiful attires and gave a glimpse of Krishna's eventful life which began with his birth in a jail to the phase where he took upon the most prestigious role of his life of being a mentor, a guide to a confused Arjun. The Tableau depicting Lord Krishna lifting Goverdhan Hill to protect his near and dear from torrential rains caused by the anger of Indra considered the King of Devas was a great attraction. The tableaus of Radha and Krishna and Vrindavan had everyone mesmerized. Kans Vadh killing of Mathura King Kans by Lord Krishna was very well displayed. The tableaus depicting Lord Krishna in Gurukul with his acharya Sandipani Muni, the Draupadi Vastraharan and Sudama visit to meet Lord Krishna had all visitors spending extra minutes to admire the presentations The tableau depicting Vishwaroopa by Lord Krishna was awe inspiring indeed. It goes without saying that the tableau depicting Gita Updesh was a star attraction and the message for students was the very last shloka which was by Sanjay to Dhritarashtra which in essence means that the winning combo is Krishna and Arjun implying Knowledge and Skills. It is also customary for Radio Banasthali which is the first community radio station of Rajasthan to broadcast special programs on the occasion of Janamashtmi. Many students observed fast on the occasion and the special menu in the hostels include mouth water harvesting sweets to mark the occasion. Students and faculty who took part in the Janmashtami celebrations at Banasthali left with beaming faces and pride that they were indeed part of an institution which is a shining jewel in the crown among the institutions not only in India today but across the globe.For more details about Banasthali see http://www.banasthali.org/Banasthali Vidyapith Banasthali Rajasthan – 304022 Phone 91 1438 228456 / 228341 Email: info@banasthali.ac.in Website: http://www.banasthali.org Facebook: www.facebook.com/Banasthali.orgAbout Banasthali: Established in 1935, the Institution which is also the largest fully residential women’s university in the world has played a big role in revolutionizing women’s education and empowerment in India for the last eight decades. Banasthali has scripted numerous success stories in a wide range of fields, and stands tall among the citadels of learning in India today. Proud to be Banasthali alumni who call themselves as Banasthalites can be found in all latitudes, longitudes and altitudes in all walks of life across the globe. Banasthali has the pride of being chosen as a Faculty Development Centre under the MHRD Govt of India Pandit Madan Mohan Malaviya National Mission on Teachers and Teaching (PMMMNMTT) as well as for hosting Atal Incubation Centre (AIC) by NITI Aayog Apart from various National Rankings which include India Today #2, FICCI University of the year 2015, NAAC A grade, MHRD NIRF 29, in recent past, Banasthali has been in national and international media attention for getting Quacquarelli Symonds QS Asia University Ranking, QS BRICS Ranking, Diamond status under QS i-Gauge Indian University Rating and the overall Four Star Ranking in - QS Stars Rated for Excellence with 5 Stars for each for Teaching, Employability, Facilities, Arts & Culture and Inclusiveness.

08-30-2019 | Associations & Organizations
Banasthali
Chevening Fellow Prof Suphia Khan Banasthali Participates in CRISP IGNITE 2019 A …
Chevening is the UK government’s international awards programme aimed at developing global leaders since 1983. There are two types of award – Chevening Scholarships and Chevening Fellowships – the recipients of which are personally selected by British embassies and high Commissions throughout the world. Chevening Research, Science, and Innovation Leadership Fellowship (CRISP) Hosted by the University of Oxford is aimed at mid-career professionals with very high potential in the fields
08-29-2019 | Sports
Banasthali
At Banasthali Everyday is National Sports Day and Keep Fit Day
To commemorate the birth anniversary of 'The Wizard', hockey legend Olympian Major Dhyan Chand who had scored over 400 goals in his career from 1926 to 1948, India celebrates 29 Aug every year as National Sports Day. With over 16000 girls coming from different parts of the nation, the 850 acre Banasthali campus itself is a mini India echoing the lines of Gurudev Rabindranath Tagore in National anthem “Panjaba Sindhu
08-23-2019 | Science & Education
Banasthali
Banasthali School of Earth Sciences Celebrates National Remote Sensing Day 2019
The day is in honour of Dr Vikram Ambalal Sarabhai born on 12 Aug 1919 undisputedly the father of the Indian Space Program who was a great institution builder without any parallel. Some of the institutions where he played a stellar role for their establishment include at Ahmedabad Physical Research Laboratory (PRL), Space Application Centre and Indian Institute of Management (IIM); at Thiruvananthapuram Vikram Sarabhai Space Centre; at
08-21-2019 | Arts & Culture
Banasthali
Manipuri Dancer Bimbavati Devi Enthralls audience at Banasthali
It is said in the Great Preface of “The Book of Songs,” an anthology of Chinese poems dating from the 10th to the 7th century BC: “The emotions are stirred and take form in words. If words are not enough, we speak in sighs. If sighs are not enough, we sing them. If singing is not enough, then unconsciously our hands dance them and our feet tap them.” Society for the

02-24-2020 | Business, Economy, Finances, B …
QY Research, Inc.
Hydroxybenzoate Market Report Size, Players Analysis and Forecast to 2026| Crist …
The report titled Global Hydroxybenzoate Market is one of the most comprehensive and important additions to QY Research's archive of market research studies. It offers detailed research and analysis of key aspects of the global Hydroxybenzoate market. The market analysts authoring this report have provided in-depth information on leading growth drivers, restraints, challenges, trends, and opportunities to offer a complete analysis of the global Hydroxybenzoate market. Market participants can use
11-30-2018 | Industry, Real Estate & Constr …
Up Market Research (UMR)
Tile Grout Market Global Forecast 2018| Studied By Mapel, Dunlop, Crafit, Bostik …
UpMarketResearch published an exclusive report on “Tile Grout market” delivering key insights and providing a competitive advantage to clients through a detailed report. The report contains 113 pages which highly exhibits on current market analysis scenario, upcoming as well as future opportunities, revenue growth, pricing and profitability. This report focuses on the Tile Grout market, especially in North America, Europe and Asia-Pacific, South America, Middle East and Africa.
11-06-2018 | Business, Economy, Finances, B …
WISE GUY RESEARCH CONSULTANTS PVT LTD
White Paperboard Market 2018 Global Analysis By Key Players – Nippon Paper, We …
White Paperboard Market 2018 Wiseguyreports.Com adds “White Paperboard Market –Market Demand, Growth, Opportunities, Analysis of Top Key Players and Forecast to 2025” To Its Research Database. Report Details: This report provides in depth study of “White Paperboard Market” using SWOT analysis i.e. Strength, Weakness, Opportunities and Threat to the organization. The White Paperboard Market report also provides an in-depth survey of key players in the market which is based on the various objectives
03-23-2018 | Leisure, Entertainment, Miscel …
Music Promotion Club
'With Me' By Krishna Frazier is Rocking the World with its Vibrant Musicality
Krishna Frazier’s latest release “With Me” has an easy-going and relaxing vibe which gets you to start your weekends the right way. This rising star from Houston, United States brings an unique blend of hip hop and rap music which is energizing as well as calming. The music as well as melody in this song is amazingly light in nature with riffs, beats and the varying ranges of audio
09-18-2017 | Politics, Law & Society
Newspatrolling
Upset Hindus urge Alibaba to apologize & withdraw Krishna-Ganesha doormats
NewsPatrolling.com/Glamourtreat.com ; Upset Hindus are urging Hangzhou (China) headquartered e-commerce giant Alibaba Group for immediate withdrawal from its website of doormats carrying images of Hindu deities Lord Krishna and Lord Ganesha; calling it highly inappropriate. Distinguished Hindu statesman Rajan Zed, in a statement in Nevada (USA) today, said that it was shocking to visualize that Alibaba, for its mercantile greed, was apparently persuading the world to scrub/wipe the soles of
06-13-2017 | Industry, Real Estate & Constr …
Worldwide Business
Global Buckwheat Market 2017 : Homestead Organics, Birkett Mills, Galinta IR Par …
A market study based on the "Buckwheat Market" across the globe, recently added to the repository of Market Research, is titled ‘Global Buckwheat Market 2017’. The research report analyses the historical as well as present performance of the worldwide Buckwheat industry, and makes predictions on the future status of Buckwheat market on the basis of this analysis. Get Free Sample Copy of Report Here : http://bit.ly/2snY4b8 Top Manufacturers Analysis Of This Research
Comments about openPR
OpenPR is clearly structured and remains true to its principle of confining itself to the essential parts. OpenPR has proven to be a very good and reliable partner to our media agency: Within the shortest time the releases are online and go down well with the media representatives. The success of OpenPR is reflected in the steadily increasing number of press releases. It is good that OpenPR exists!
Ursula Koslik, Director Marketing & PR, F+W Hamburg