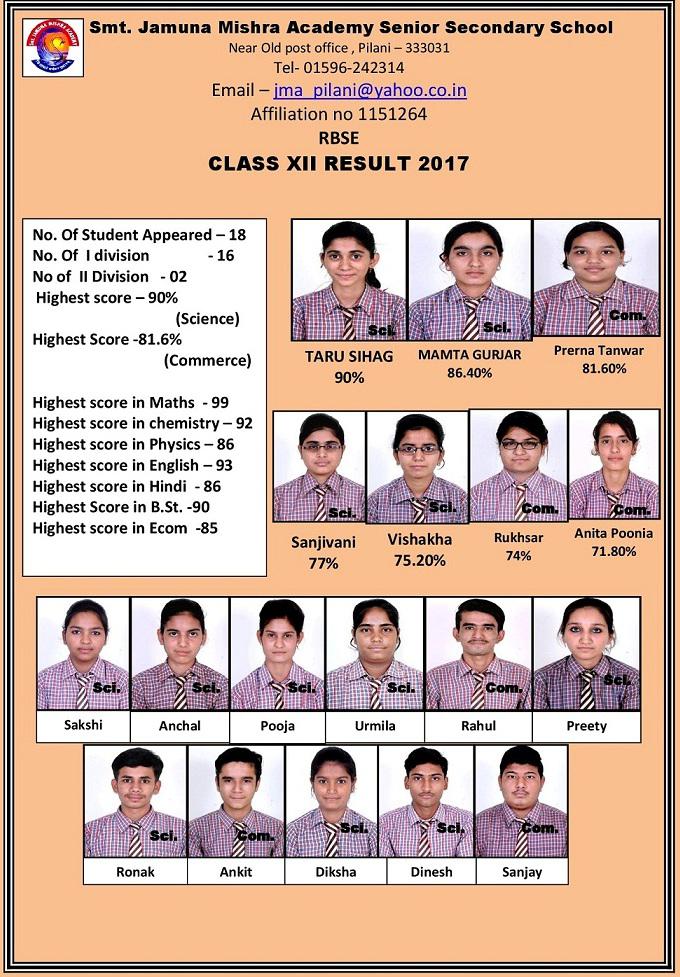 JMA which has been making rapid strides in early childhood education derives its inspiration from the quote “Information is just bits of data while knowledge is putting them together and wisdom is transcending them.”Matter of pride that in Board of Secondary Education Rajasthan RBSE 2017 Class XII, the very second Batch of Jamuna Mishra Academy - JMA Pilani has secured 100% Result among the schools of Pilani. Total Students: 18 of which 16 First Division and 2 Second Division. School Topper for Science Stream Miss Taru Sihag who scored 90.00% also got highest subject marks in three subjects namely Mathematics 99%, Chemistry 92% and Physics 86%. Miss Mamta Gujar from Science stream scored highest marks in two subjects namely English 93% and Hindi 86%.School Topper for Commerce Stream Miss Prerna Tanwar who scored 81.60% also got highest subject marks in four subjects namely Business Studies 90%, English 89%, Economics 85% and Accountancy 67%. Among the commerce stream students Miss Anita Poonia scored subject highest marks in two subjects namely English 89% and Hindi 83%.Principal Mrs Booma Natarajan congratulated all the students and wished them the very best in all their future endeavors. She also thanked the team of teachers and all staff of school for ensuring that the highest standards are maintained at all times and all parents for their wholehearted cooperation.For more details about JMA Pilani see www.http://jmapilani.org/About JMA Pilani: Smt. Jamuna Mishra Academy (JMA) established in the year 2004 which has been making rapid strides in early childhood education is presently one of the most sought after schools at Pilani considered as Oasis in the desert state of Rajasthan well known in India today for top ranking institutions like BITS Pilani University as well as CSIR Laboratory CEERI and globally renowned Birla Science Museum. JMA Pilani is a Co-educational English Medium School with Experienced Teachers, Spacious Classrooms and Modern Amenities designed to impart Quality Education combined with All Round Personality Development and lay the Best Foundation for the Child’s Future. JMA which started in 2004 with an enrollment of 60 students for the Nursery, LKG, First Junior and Class I has grown today till Class XII and enrollment of 900. While the school admits both boys and girls, the girl student enrollment has been steadily rising every year and is presently nearly 50% of the total strength. The school has boys NCC, girls band which has been winning laurels every year too. Yoga and Fine arts are not just part of school routine but a way of life for the students.Mrs Booma Natarajan, M.Sc., M.A., B.Ed. Principal, Jamuna Mishra Academy – JMA Near Old Pilani Post Office Pilani Rajasthan 333031 India Phone 91-1596-242314 Email booma_pilani at yahoo.co.in Website: http://www.jmapilani.org/ FaceBook: https://hi-in.facebook.com/JMAPilaniRajasthanRank1/?ref=py_c