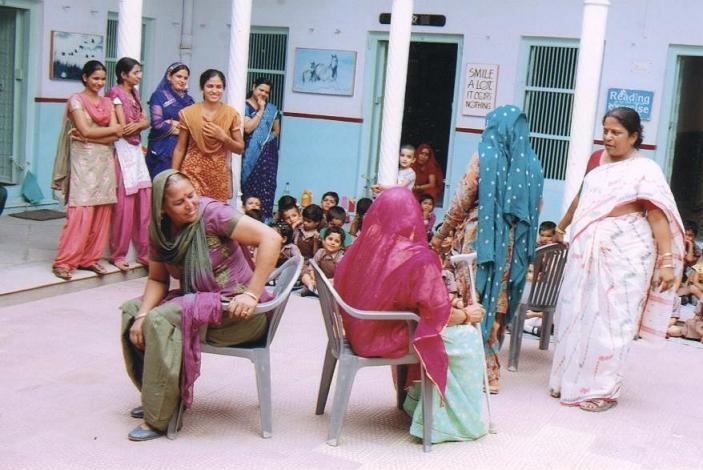 The grandparents may have silvery hair but their hearts always have been golden. One can say that a little bit of parent, a little bit of teacher, a little bit of best friend all rolled into one is the grandparent. It is essential that this generation of children in India today realize that Grandparents are indeed our heritage as well as essential members of our families and communities.Every child has fond memories forever of their grandparents holding on their tiny hands with affection and telling fairy tales as well as narrating interesting episodes from great epics like Ramayana and Mahabharata. Most children in India today indeed proudly claim their knowledge of these epics from “kahani” sessions by grandparents. Dadi Maa ki Khaniyan has always been an integral component of Indian civilization.Research studies by Prof Chris Stringer author of “The Origin of Our Species”, Prof Kristen Hawkes of University of Utah, Professor Rachel Caspari of Central Michigan University and many more have established that grandparents have indeed played a stellar role in the evolution of human civilization in terms of foraging food, locating water supplies, identifying poisonous food, teaching skills of tool making etc apart from babysitting, making toys with common items and most importantly passing on vital wisdom on human relationships. Indian values have long been tied to a particularly high degree of respect for the elderly. A common tradition in India has been the young touching the feet of the elderly as a sign of love and respect. The changing value system in Indian society has pushed the elderly to old age homes or isolated them to care for themselves. Different countries in the world observe grandparents day on different dates. In Germany, many families have the custom of spending the second day of Christmas (December 26) St Stephen's Day with grandparents. Mathew Cherian, Chief Executive of Helpage India says "The elderly need food; they need pensions; they need healthcare and we are completely at a loss, and this problem is only going to grow. Its high a time the government of India addresses this issue without any further delay." It emerges beyond doubt that the early childhood education of children in schools must emphasize on lifelong love and care for the elderly in addition to respect.Located in the heart of Shekhawati region of Rajasthan, Pilani is well known for various educational institutions, CSIR Laboratory CEERI as well as the upcoming BrahMos Missile Assembly Project unit. Jamuna Mishra Academy – JMA established in the year 2004 which has been making rapid strides in early childhood education is presently one of the most sought after schools at Pilani Rajasthan. JMA which started in 2004 with an enrollment of 60 students for the Nursery, LKG, First Junior and Class1 has grown today till Class VIII with well over 500 students. While the school admits both boys and girls, the girl student enrollment has been steadily rising every year and is presently close to 50% of the total strength which itself is a matter of pride in a state like Rajasthan which had alarmingly low record of girl’s education. With an aim to make children recognize and appreciate the elderly population, for their values and contribution made to their families and the society, JMA Pilani celebrated Grandparents day on August 05, 2011 at the school premises. Mrs Booma Natarajan Principal JMA Pilani welcomed the grandparents who had over six decades of wisdom and said that they are the ones who give the child unconditional love, kindness, patience, humor, comfort, storytelling, reciting rhymes, lessons in life apart from the regular feed of creamy biscuits and yummy chocolates. The children from nursery and LKG entertained their grandparents with the activities of the school. After a hearty tea snack break, the grand mothers and grand fathers played musical chair with the grand children cheering them up. When the celebrations got over, thanking the Principal and the team of teachers, one of the grandparents remarked that they came to the school as 60 plus and left as 6 minus.It is known that Information is just bits of data while Knowledge is putting them together and Wisdom is transcending them and that that our grandparents have indeed played a very crucial role in transmitting the wisdom to successive generations. For more details about school see http://www.jma-pilani.page.tl/About JMA Pilani: Smt Jamuna Mishra Academy - JMA Pilani is a Co-educational English Medium School with Experienced Teachers, Spacious Classrooms and Modern Amenities Designed to impart Quality Education combined with All Round Personality Development and lay the Best Foundation for the Child's Future. For more details about JMA Pilani see http://www.jma-pilani.page.tl/Mrs Booma Natarajan MSc (Chemistry), MA (Childcare & Education), B.Ed Principal Jamuna Mishra Academy – JMA Atma Ram Padia Marg Pilani Rajasthan 333031 India Phone 91-1596-242314 Email booma_pilani at yahoo.co.in Website http://www.jma-pilani.page.tl/