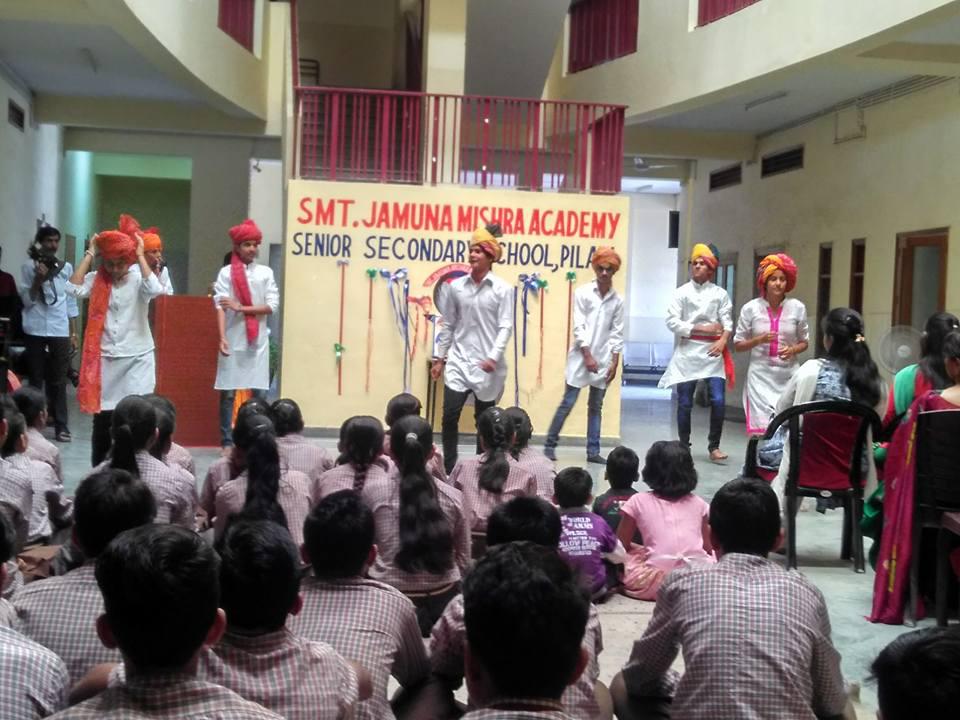 With the State Foundation Day this year coinciding with Gangaur one of the most popular festival for womenfolk of Rajasthan, the integrated celebrations indeed were the most colourful.Rajasthan which is indeed a destination that defines definition is the largest state of the Republic of India today in terms of area and it will not be an exaggeration if it is said that no other region in the country is a conglomeration of so many paradoxes. The present state of Rajasthan with 33 districts was formed on 30th March 1949 when the erstwhile princely states merged into the Union of India. Right from its inception, Smt Jamuna Mishra Academy – JMA which is one among the top ranking schools in Pilani has embarked on a rich tradition of celebrating various days of national and international significance. On 30 March 2017, JMA observed the 68th Rajasthan Diwas by organizing a colourful program in which teachers, staff and students enthusiastically participated. The proceedings were anchored by energy bursting teacher Mahendar Kumar Naik and Ms Suman Saini. Ms Poonam Gupta conducted the quiz covering the arts and culture, fairs and festivals, folk dances and landmarks of Rajasthan. Ms Kritika Mandad coordinated the cultural programs with students dancing to popular songs of the state including all time over a million hit anthem Mharo Rajasthan by superstars Rapperia Balam and Kunal Verma. The high lights of the celebrations included dancing to folk song by the lady teachers of the school who had come specially dressed up for the occasion and there was thunderous applause when Principal Mrs Booma Natarajan and President of the school society Dr Suman Mishra who had come from USA joined the teachers and danced. The program ended with the ladies from subordinate staff singing the traditional gangaur geet with utmost devotion. When the celebrations ended, the students of JMA who had come for the function left with beaming faces and pride that they were indeed part of an institution which is a shining jewel in the crown among the schools at Pilani.For more details about JMA Pilani see http://jmapilani.orgAbout JMA Pilani: Smt. Jamuna Mishra Academy (JMA) established in the year 2004 which has been making rapid strides in early childhood education is presently one of the most sought after schools at Pilani considered as Oasis in the desert state of Rajasthan well known in India today for one among top in world ranking BITS Pilani University as well as CSIR Laboratory CEERI and globally renowned Birla Science Museum. JMA Pilani is a Co-educational English Medium School with Experienced Teachers, Spacious Classrooms and Modern Amenities designed to impart Quality Education combined with All Round Personality Development and lay the Best Foundation for the Child’s Future. JMA which started in 2004 with an enrollment of 60 students for the Nursery, LKG, First Junior and Class I has grown today till Class XII and enrollment of 900. While the school admits both boys and girls, the girl student enrollment has been steadily rising every year and is presently nearly 50% of the total strength. The school has boys NCC, girls band which has been winning laurels every year too. Yoga and Fine arts are not just part of school routine but a way of life for the students.Mrs Booma Natarajan, M.Sc., M.A., B.Ed. Principal, Jamuna Mishra Academy – JMA Near Old Pilani Post Office Pilani Rajasthan 333031 India Phone 91-1596-242314 Email booma_pilani at yahoo.co.in Website: http://jmapilani.org/

11-03-2018 | Science & Education
JMA Pilani Rajasthan
JMA Pilani Celebrates Rashtriya Ekta Diwas – National Unity Day
Sardar Patel indeed consolidated the country into one united whole in a unique manner. For his vision and mission carried out with passion, Sardar Patel is often referred as Chanakya of modern India. The history of India today would have been different had the London educated barrister Sardar Patel with a true heart of a Hindustani not been the Deputy Prime Minister when India became independent in 1947. At the time
10-18-2018 | Arts & Culture
JMA Pilani Rajasthan
Competitions Galore at JMA Pilani Hindi Diwas Day Celebrations
No one has doubt that language indeed shapes the way we think, and also determines what we can think about. To quote of Samuel Taylor Coleridge “Language is the armory of the human mind, and at once contains the trophies of its past and the weapons of its future conquests.” It was on 14 September 1949, the Constitution-makers of India decided to accord the status of Official Language of the Union
08-14-2018 | Science & Education
Banasthali
Shaheed Diwas at Banasthali to Mark August Kranti
The stellar role of Banasthali in the freedom struggle of India is folklore. The founder of Banasthali “Apaji” Hiralal Shastri himself is a veteran freedom fighter and member of the Constituent Assembly and signatory to the Constitution of India. Banasthali philosophy goes beyond imparting formal education to women in various fields and includes value system, ethics, good citizenship, patriotism etc. It is rather unfortunate that more youth of India today possibly
09-18-2012 | Science & Education
Sangam University
Hindi Diwas at Sangam University Bhilwara Rajasthan
The increasing popularity of Bollywood and the sheer richness of Indian culture across the globe, one should not be surprised if Hindi soon overtakes Chinese as the most spoken language in the world. Language is the armory of the human mind, and at once contains the trophies of its past and the weapons of its future conquests. Language is obviously a vital tool as it is not only a means of communicating
03-30-2012 | Science & Education
JMA Pilani Rajasthan
Rajasthan Day 2012 Celebrated at JMA Pilani
JMA Pilani which aims to be one among the top ranking schools in India today derives its strength from the quote “Information is just bits of data while knowledge is putting them together and wisdom is transcending them.” Rajasthan which is indeed a destination that defines definition is the largest state of the Republic of India today in terms of area and it will not be an exaggeration if it is
09-22-2011 | Science & Education
JMA Pilani Rajasthan
World Peace Day at JMA Pilani Rajasthan
Located in the heart of Shekhawati region of Rajasthan, Pilani is well known in India today for various top ranking educational institutions, CSIR Laboratory CEERI as well as the upcoming BrahMos Missile Assembly Project unit. Jamuna Mishra Academy – JMA established in the year 2004 which has been making rapid strides in early childhood education is presently one among the top ranking and most sought after schools at Pilani Rajasthan.
Comments about openPR
9 o'clock: discuss press release with client, 10 o'clock: submit release to openPR, within the briefest possible time release is published and displayed in a prominent place on openPR.de. I am thrilled!
Zehra Spindler, Calypso Now! - Communication Agency