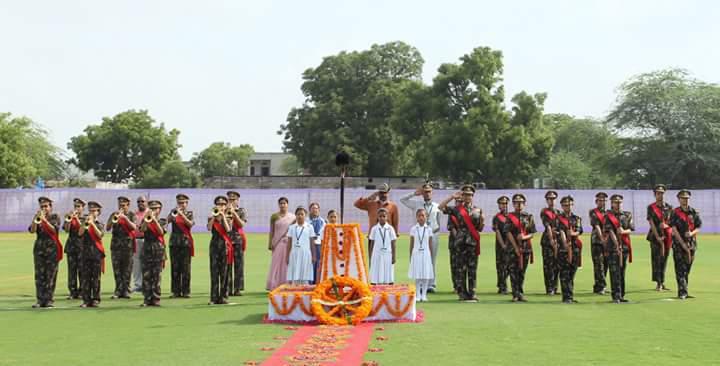 The stellar role of Banasthali in the freedom struggle of India is folklore. The founder of Banasthali “Apaji” Hiralal Shastri himself is a veteran freedom fighter and member of the Constituent Assembly and signatory to the Constitution of India. Banasthali philosophy goes beyond imparting formal education to women in various fields and includes value system, ethics, good citizenship, patriotism etc.It is rather unfortunate that more youth of India today possibly remember 9 Aug as the day when USA dropped Atom Bomb code named Fat Man on Nagasaki in 1945 rather than the launching of Quit India movement with the Do or Die “ Karo ya Maro” Mantra on Aug 9, 1942 at Gowalia Tank Maidan in Mumbai by the Father of the Nation Mahatma Gandhi which shook the very foundation of the British empire. The Do or Die clarion call galvanized not one or two or three Indians for the Freedom struggle but lakhs of them to come forward and sacrifice for the nation at large. Undoubtedly August Kranti is the Shaheed Diwas milestone for India.For the past several decades, Banasthali has been observing 09 August every year as Shaheed Diwas. On 09 Aug 2018, all students and faculty assembled at the Lakshmi Bhai Maidan to pay respects and recall the sacrifices made by countless number of Indians for achieving freedom for the nation. A special wreath was placed in artistically decorated memorial to remember the Shaheeds which was followed by Banasthali Band performance and Banasthali Choir singing various patriotic songs.When it comes to preserving legacy and heritage, Banasthali always stands apart and when the program ended, the students and faculty left the venue with beaming faces and pride that they were indeed part of an institution which is a shining jewel in the crown among the eminent educational institutions in India today. At Banasthali, Shaheed Diwas to Mark August Kranti is indeed A Day Never to be Forgotten.For more details about Banasthali see http://www.banasthali.org/About Banasthali: Established in 1935, the Institution which is also the largest fully residential women’s university in the world has played a big role in revolutionizing women’s education and empowerment in India for the last eight decades. Banasthali has scripted numerous success stories in a wide range of fields, and stands tall among the citadels of learning in India today. Proud to be Banasthali alumni who call themselves as Banasthalites can be found in all latitudes, longitudes and altitudes in all walks of life across the globe. Banasthali has the pride of being chosen as a Faculty Development Centre under the MHRD Govt of India Pandit Madan Mohan Malaviya National Mission on Teachers and Teaching (PMMMNMTT) as well as for hosting Atal Incubation Centre (AIC) by NITI Aayog. Banasthali also has Quacquarelli Symonds QS Four Star Ranking and Diamond Status.Banasthali Vidyapith Banasthali Rajasthan – 304022 Phone 91 1438 228456 / 228341 Email: info@banasthali.ac.in Website: http://www.banasthali.org Facebook: www.facebook.com/Banasthali.org