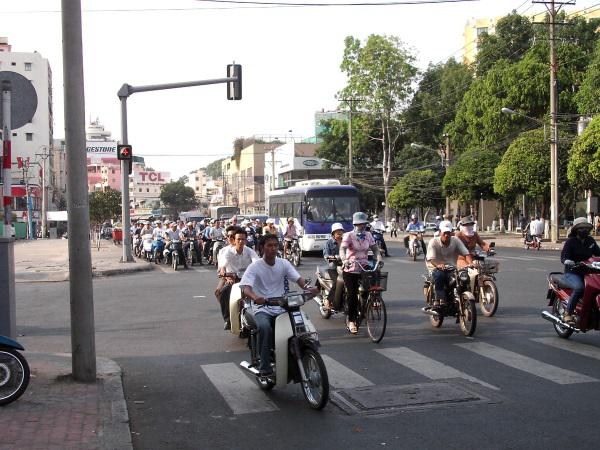 Vietnam belongs for tourists to the most popular and safest travel destinations in the world, as long as one can believe officially widespread reports. However, this information may not been longer current since a long time. More and more tourists in Vietnam were killed at criminal offenses as well by tragic accidents. These accidents occur mostly due to insufficient checking for compliance with statutory safety regulations by the Vietnamese authorities. ITI-HOLIDAY had reported as early as April 2016 about the constantly rising crime in Vietnam , especially in the metropolis of Ho Chi Minh City.Crime in Vietnam risesITI-HOLIDAY had reported as early as April 2016 about the constantly rising crime in Vietnam, especially in the metropolis of Ho Chi Minh City. The offenders became more and more unscrupulous over the past years and willing to accept even the death of their victims. On Monday the 27th June 2016, at 5.00 am, a 24 years old woman was on her way back home when she became the victim of a brutal robbery in Vo Thi Sau Street (District 1 of Ho Chi Minh City). The two perpetrators on a scooter were trying to steal the handbag of the young woman by drive past. The young woman was crashed so hard that she died three days later at hospital by her head cerebral injuries.Tourists killed by robbers - not a unique caseA similar crime occurred in District 11 of Ho Chi Minh City on 30th November 2015. At 1:00 pm a couple was on the way in the Lac Long Quan Street together with the sister of the husband. Here the family was attacked by robbers on a scooter. The criminals tried to snatch the handbag from the 58-year-old sister of the husband. All three victims crashed hard at this attack but fortunately the couple was only slightly injured. However the 58-year-old woman had not been so lucky. She was unconscious after the accident and was taken to a nearby hospital. In there she died on the same day because of her brain injuries.Other risks to be killed in Vietnam as tourist: http://www.vietnam-visa-for-vietnam.com/tourists-killed-in-vietnam.htmlITI-HOLIDAY Germany is an online travel agency for tours in Vietnam, Laos and Cambodia. We are offering affordable individual tours and fair travel service for the Europeans and here especially for the German market, into the Asian regions. ITI-HOLIDAY is an specialised international tour operator with a comprehensive service for travelers in Southeast Asia and Indochina. We are present on the European travel market Since 2008. We pleased about our growing customer numbers and popularity. We set great attention to customer satisfaction, service, fair prices and to realize it, we are leveraging the long experience of ITI-HOLIDAY Asia. Our strong community of local tour operators makes it possible.ITI-HOLIDAY Germany Indochina Travel Individual Klingerstrasse 41F 09117 Chemnitz Germany Proprietor Heiko Grimm Tel.: +49 371 2832201 Tel.: +49 371 3179571 Fax: +49 3212 1415272 E-Mail: info(at)iti-holiday.com Internet: www.vietnam-visa-for-vietnam.com

03-15-2017 | Tourism, Cars, Traffic
ITI-HOLIDAY
Vietnam Visa on Arrival now available at the airport Cam Ranh
The Visa on Arrival for Vietnam has been to enable travels to Vietnam for several weeks again with arrivals at the international airport of Cam Ranh in the center of the country. This is especially for those travelers who want to experience a relaxing beach holiday in Vietnam because the seaside resort of Nha Trang with its seven kilometers long beach and a lot of tropical islands along of the
09-12-2016 | Politics, Law & Society
ITI-HOLIDAY
Environmental disaster in Vietnam
In Vietnam occurred the biggest environmental disaster since the deployment of Agent Orange by the Americans during the Vietnam War. It happened almost unnoticed by the world while Europe was busy with the refugee crisis and America with the forthcoming presidential elections of the USA. The perpetrators of the environmental disaster come from abroad and are supported by the Vietnamese politicians, similar as it was happen at the Vietnam War. "
07-04-2016 | Tourism, Cars, Traffic
ITI-HOLIDAY
Visa exemption for Vietnam is extended
The mystery of the extension of the Visa waiver for Vietnam is dissolved. Today (at the first of July.2016) we received official reports from Vietnam where announced that the wishes of the Vietnamese Ministry of Tourism are realized and the Visa exemption for citizens of five European countries is extended for one more year, until the 30.06.2017 becomes. But for some Vietnam vacationers this news comes too late, as they
05-30-2016 | Tourism, Cars, Traffic
ITI-HOLIDAY
Vung Tau Beach puts on an entirely “new shirt”
Vung Tau authority has officially banned carousing and cooking on the beach on April 26. 2016. To arrive at this decision, the cause also comes from the unconscious of many people. According to Ms. Truong Thi Huong, Deputy Chairwoman of People's Committee of Vung Tau City, people trade food and tourists carouse at the beach then they don’t clean up, even they throw rubbish indiscriminately and sleazily which contribute to the

04-18-2019 | Business, Economy, Finances, B …
The Insight Partners
Virtual Care Market – In-Depth Analysis with Booming Trends Supporting Growth …
The "Global Virtual Care Market Analysis to 2027" is a specialized and in-depth study of the healthcare industry with a special focus on the global market trend analysis. The report aims to provide an overview of virtual care market with detailed market segmentation by consultation type, end-user, and geography. The global virtual care market is expected to witness high growth during the forecast period. The report provides key statistics on
03-03-2017 | Advertising, Media Consulting, …
GlobeMetrix
Global MS Resin (SMMA) Market 2017- Denka(JP) ,Chi Mei(TW)
Global MS Resin (SMMA) Market 2017 Research Report offers a complete and in-depth analysis of the growth rate of the MS Resin (SMMA) industry. In the first section, MS Resin (SMMA) Market report presents the overview of MS Resin (SMMA) industry which includes definitions, classifications, applications and MS Resin (SMMA) industry chain structure. Global MS Resin (SMMA) Market further includes MS Resin (SMMA) development history, competitive analysis of MS Resin (SMMA)
07-08-2016 | Associations & Organizations
EAC Network
Tai Chi Chuan Spreads to Community Groups Through Mini-Grants
(Long Island, NY) The Roselie Brenner Tai Chi Fund, managed by Hempstead-based social service agency EAC Network, awarded five mini-grants of up to $1,000 to Long Island-based community groups to develop sustainable projects and activities that promote active participation in Tai Chi Chuan programs. The winning applications included Youth Directions and Alternatives in East Northport to provide a series of ten free Tai Chi classes for at-risk youth at
04-01-2016 | Tourism, Cars, Traffic
ITI-HOLIDAY
Ho Chi Minh City - crime rises steadily
Crime in biggest metropolis of Vietnam has grown steadily over the past years and continues to expand. Crimes such as theft and robbery as well others are not only more and more a problem for tourists and locals but also are new challenges for the state authorities. Mr. and Ms. Doe (name changed by the editor) are annoyed because they were victims of a robbery in the morning near Ben Thanh
01-03-2011 | Sports
Airex AG
BeBalanced! Tai Chi for body, mind and spirit
With its training program BeBalanced! Tai Chi, Airex AG – the manufacturer of AIREX® mats and Balance products – offers another program especially developed for the AIREX® Balance-pad Elite. BeBalanced! Tai Chi means training and at the same time relaxation for body, mind and spirit. BeBalanced! Tai Chi is a training program based on the traditional martial art. It can be performed in a group and in personal training. The
10-11-2010 | Health & Medicine
Relaxed And Alert
Qigong and Tai chi for Medical Conditions
When combined with standard treatment, tai chi and qigong appears to be helpful for several medical conditions. For example: Arthritis. In a 40-person study at Tufts University, presented in October 2008 at a meeting of the American College of Rheumatology, an hour of tai chi twice a week for 12 weeks reduced pain and improved mood and physical functioning more than standard stretching exercises in people with severe knee osteoarthritis. According
Comments about openPR
9 o'clock: discuss press release with client, 10 o'clock: submit release to openPR, within the briefest possible time release is published and displayed in a prominent place on openPR.de. I am thrilled!
Zehra Spindler, Calypso Now! - Communication Agency