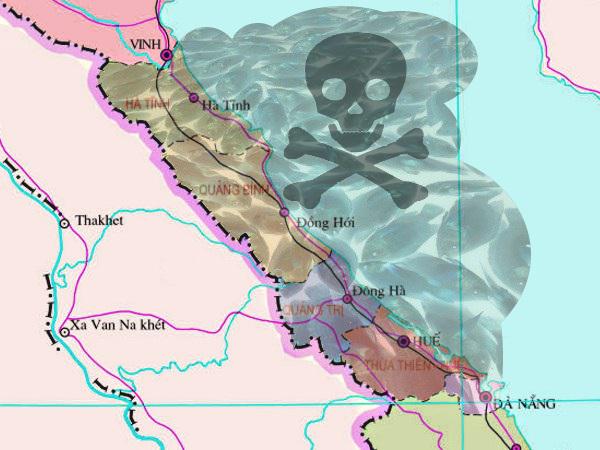 The 5 by the environmental disaster most affected provinces and coastal regions in central Vietnam.

In Vietnam occurred the biggest environmental disaster since the deployment of Agent Orange by the Americans during the Vietnam War. It happened almost unnoticed by the world while Europe was busy with the refugee crisis and America with the forthcoming presidential elections of the USA. The perpetrators of the environmental disaster come from abroad and are supported by the Vietnamese politicians, similar as it was happen at the Vietnam War." probably the biggest environmental disaster in Vietnam since Agent Orange "Beginning in early April 2016 a massive fish deaths on the coast of Vietnam was perceived. The disaster began in Ha Tinh province, in central Vietnam and then spreads to more than 200 km of coastline, into the provinces of Quang Binh, Quang Tri, Thua Thien Hue and Da Nang. Since then a few hundred thousands (well much more than 115 tons) of dead fish were purged on the beaches of the region. Thousands of Vietnamese are threatened in their existence.those who are responsible for the environmental disaster in Vietnam" Do you want fish or steel? " A steel plant of the Taiwanese company Formosa Plastics Group (FPG) in Vietnamese Ha Tinh province has been begins the operation in early April 2016. The mass fish mortality started at the same time. Fishermen of the region discovered some pipelines of the Formosa Ha Tinh Steel Company (FHS), which initiated the company's wastewater directly into the sea. The fishermen were sure that they had found the cause of the environmental disaster. This assumption of the fishermen’s was then confirmed in a first unofficial statement of Formosa. Mr. Chou Chun Fan, a senior manager of the company apologized for the disaster. But he made it clear that one must lose something if ones are planning to win something. He underscored his opinion with the statement: "Do you want fish or do you want a steelworks? You need to decide!". This led to a wave of protests as well to indignation among the Vietnamese population. The allegations were vehemently disclaimed by official side of Formosa Ha Tinh Steel Company (FHS). Mr. Chou Chun Fan was dismissed on the grounds that he does not represent the opinion of the company. The Vietnamese government in Hanoi practiced restraint. However, it was emphasized that they wanted to solve the case rest. The Vietnamese Deputy Minister for Resources and Environment, Mr. Vo Tuan Nhan spoke the Formosa Ha Tinh Steel Company (FHS) free from any responsibility on the environmental disaster during a press conference on 27.04.2016. Cause of the fish deaths was probably rather an algal bloom and the initiation of toxic chemicals by the residents of the region. Questions were not permitted by Vietnamese government during the press conference. Vietnamese civil rights activists assume that corrupt government officials were bribed by the Formosa to cover up the incident.” Formosa Plastics Group ” The Taiwanese Formosa Plastics Group is with an annual turnover of 78 billion USD and more than 106-thousand employees one of the largest chemical concerns in the world. The Group operates numerous subsidiaries in Taiwan, China, Vietnam as well in the United States and other countries. The owners and the management of the Formosa Plastics Group were in 2009 denounced, by the ethecon - Foundation for Ethics & Economics with the Black Planet Award as they belonging to the persons who are responsible for the largest pollution at the earth.Read full article about the environmental disaster in Vietnam at ITI-HOLIDAY: http://www.vietnam-visa-for-vietnam.com/environmental_disaster_in_vietnam.htmlITI-HOLIDAY Germany is an online travel agency for tours in Vietnam, Laos and Cambodia. We are offering affordable individual tours and fair travel service for the Europeans and here especially for the German market, into the Asian regions. ITI-HOLIDAY is an specialised international tour operator with a comprehensive service for travelers in Southeast Asia and Indochina. We are present on the European travel market Since 2008. We pleased about our growing customer numbers and popularity. We set great attention to customer satisfaction, service, fair prices and to realize it, we are leveraging the long experience of ITI-HOLIDAY Asia. Our strong community of local tour operators makes it possible.ITI-HOLIDAY Germany Indochina Travel Individual Klingerstrasse 41F 09117 Chemnitz Germany Proprietor Heiko Grimm Tel.: +49 371 2832201 Tel.: +49 371 3179571 Fax: +49 3212 1415272 E-Mail: info(at)iti-holiday.com Internet: www.vietnam-visa-for-vietnam.com

03-15-2017 | Tourism, Cars, Traffic
ITI-HOLIDAY
Vietnam Visa on Arrival now available at the airport Cam Ranh
The Visa on Arrival for Vietnam has been to enable travels to Vietnam for several weeks again with arrivals at the international airport of Cam Ranh in the center of the country. This is especially for those travelers who want to experience a relaxing beach holiday in Vietnam because the seaside resort of Nha Trang with its seven kilometers long beach and a lot of tropical islands along of the
09-08-2016 | Tourism, Cars, Traffic
ITI-HOLIDAY
Tourists killed in Vietnam
Vietnam belongs for tourists to the most popular and safest travel destinations in the world, as long as one can believe officially widespread reports. However, this information may not been longer current since a long time. More and more tourists in Vietnam were killed at criminal offenses as well by tragic accidents. These accidents occur mostly due to insufficient checking for compliance with statutory safety regulations by the Vietnamese authorities.
07-04-2016 | Tourism, Cars, Traffic
ITI-HOLIDAY
Visa exemption for Vietnam is extended
The mystery of the extension of the Visa waiver for Vietnam is dissolved. Today (at the first of July.2016) we received official reports from Vietnam where announced that the wishes of the Vietnamese Ministry of Tourism are realized and the Visa exemption for citizens of five European countries is extended for one more year, until the 30.06.2017 becomes. But for some Vietnam vacationers this news comes too late, as they
05-30-2016 | Tourism, Cars, Traffic
ITI-HOLIDAY
Vung Tau Beach puts on an entirely “new shirt”
Vung Tau authority has officially banned carousing and cooking on the beach on April 26. 2016. To arrive at this decision, the cause also comes from the unconscious of many people. According to Ms. Truong Thi Huong, Deputy Chairwoman of People's Committee of Vung Tau City, people trade food and tourists carouse at the beach then they don’t clean up, even they throw rubbish indiscriminately and sleazily which contribute to the