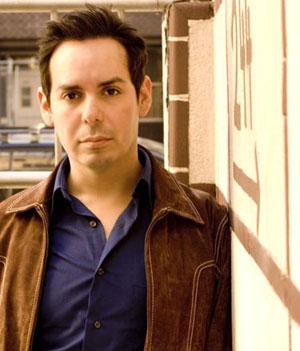 Comedian Jade Esteban Estrada has been called the "master entertainer" by the Richmond Times-Dispatch. He will host Open Mic Thursdays every fourth Thursday of the month at Sam’s Spot. Photo by ANGEL HESS.

January 21, 2008 – San Antonio, TX – Comedian Jade Esteban Estrada will host Open Mic Thursdays at 7:30 p.m. on Thursday, January 24, 2008 at Sam’s Spot located at 5440 Babcock Road in Northgate Plaza in northwest San Antonio, Texas. Sign-up begins at 7:00 p.m. The new performance venue will be open to singers, poets and comedians every fourth Thursday of the month until April. The featured act for January will be comedian Jay LaFarr. Admission is free. Food and beverages are available. For more information call 210-697-8200 or visit getjaded.com. Estrada has been featured on “The Graham Norton Effect” on Comedy Central. His music can be heard on “The Shield” on the FX Network. Other television appearances include “30 Rock” and “Friday Night Lights” on NBC and “In The Life” on PBS. The Dallas Morning News calls him “funny and irreverent.” The former Charo choreographer and scratch vocalist for the Back Street Boys has been known for his highly acclaimed solo theatre shows including “Tortilla Heaven” and his most recent artistic venture “A Lullaby for Ryan: The History of HIV/AIDS in America.” The San Antonio native began his comedic career when he won the Funniest Amateur Comic in New York Competition in 1995 at Stand Up N.Y. He has appeared at Rivercenter Comedy Club, Big Dog’s Bar and Grill, Crazy Times Comedy Club and Gotham Comedy Club among others. He recently released his own designer humor line of bilingual greeting cards, “Jade Esteban Estrada for Nos Vemos Greetings.” Estrada recently completed film “The Innocent Killers” directed by Brett Mauser and “Callous” directed by Joey Lanai. Open Mic Thursdays are sponsored by SWAG. The next show will be Thursday, February 28, 2008. For further information or to request high resolution artwork or an interview, please contact Greta Golding at vicariouspr@aol.com, call 646-342-8647 or visit www.getjaded.com. Adam Salazar Vicarious New York 145 West 45th Street New York, New York 10036 646-342-8647 www.getjaded.com Vicarious Productions produces the nationally touring shows of Comedy Central actor Jade Esteban Estrada.

03-19-2021 | Business, Economy, Finances, B …
TRU-FLEX
TRU-FLEX to Host Spring Job Fair Thursday, March 25, 2021
TRU-FLEX, LLC will host their first onsite Spring Job Fair on Thursday, March 25th from 8:30 am to 10:30 am and from 12:30pm to 5:00pm at their West Lebanon facility located at 2391 South State Road 263, West Lebanon, Indiana 47991. This Job Fair is free and open to all job seekers. At the job fair, potential candidates will have the opportunity to apply for open positions and
03-25-2020 | Sports
Pickleball Mania LLC
Its Pickleball Mania World Championship To Stream Thursday In Only Live On-Air P …
As professional and amateur sports organizations continue to do their part in maintaining best practices to combat the spread of the COVID-19 virus, postponing competitions and events worldwide, there is a void of original live sports programming on TV. Enter the Its Pickleball Mania World Pickleball Championship, set for Thursday at noon ET, streaming exclusively on ESPN3 as the only live TV sporting event currently available to viewers. Four of the
05-27-2019 | Business, Economy, Finances, B …
Chengdu Commodity Exchange
Chengdu Commodity Exchange All Set to Launch Thursday Weekly ForEx Options
How will Thursday weekly options work? CGCEX, an ideal trading destination for investors, traders and companies looking to invest, hedge or speculate by tapping into large pools of local, global and institutional investor capital, today announced that last week, CGCEX announced that the company will be launching its Thursday Weekly ForEx options (Thursday options) considering the growing customer demand. Moreover, the surprising growth in the existing weekly ForEx options is also
09-25-2017 | IT, New Media & Software
mobinteg
SMIITY AR Valongo will be presented this Thursday at the ECOXXI 2017 Ceremony
Lisbon, September 25th 2017: Following the ECOXXI event of 2016, mobinteg awarded the municipality of Valongo with an Augmented Reality mobile app: SMIITY AR. And, this Thursday (September 28), the app will be officially presented at the ECOXXI 2017 Ceremony, of which the Portuguese company is partner and where it will, once again, reward one of the participating municipalities. SMIITY AR gives the citizen or tourist the possibility to view, through
08-10-2016 | Sports
NY Empire Tennis
King, Olympians Hughes, Smart At NY Empire 'Salute To Strong Women' Thursday At …
The New York Empire presented by Citi unveiled a diverse and powerful lineup for its first ever “Salute To Strong Women” pre-match event set for Thursday night, August 11, at the venerable Forest Hills Stadium at The West Side Tennis Club, the home of the US Open for over 60 years. The event will precede the 7:00pm matchup between the NY Empire and the Orange County Breakers. The pre-match event
03-07-2011 | Industry, Real Estate & Constr …
Accommodation Times
National Real Estate Awards To Be Presented in Mumbai on Thursday, 10th March 20 …
“The National Real Estate Awards” which honour companies and individuals associated with the Real Estate sector for their contribution to this industry are to be presented in Mumbai on Thursday 10th March 2011. The Real Estate Sector accounts for 7-8% of India’s GDP (Gross Domestic Product). The awards are based on performance, transparency and innovation within the real estate sector and are the oldest national awards for this sector in
Comments about openPR
Your portal is fast, simple, and easy to use. Others may have more functions but they also demand more editing time, you have to preformat the text in order to achieve a good result etc. I think openPR is really fantastic!
Andreas Knepper, wallmedien AG